CJPME Factsheet 83, published June, 2010: This factsheet provides an overview of Mountain Equipment Co-op (MEC), Canada’s largest retail co-operative and its business relationship with an Israeli arms supplier. MEC sells around 30 products made in Israel, including hydration packs manufactured by Israeli military contractor Source Vagabond Systems. As an Israeli military contractor, Vagabond supplies hydration systems to the Israeli Army, which enforces Israel’s occupation of the West Bank — an occupation that has been cited repeatedly for violations of international humanitarian law as outlined in the Fourth Geneva Convention.

Factsheet Series No. 083, created: June 2010, Canadians for Justice and Peace in the Middle East
View factsheet in PDF format 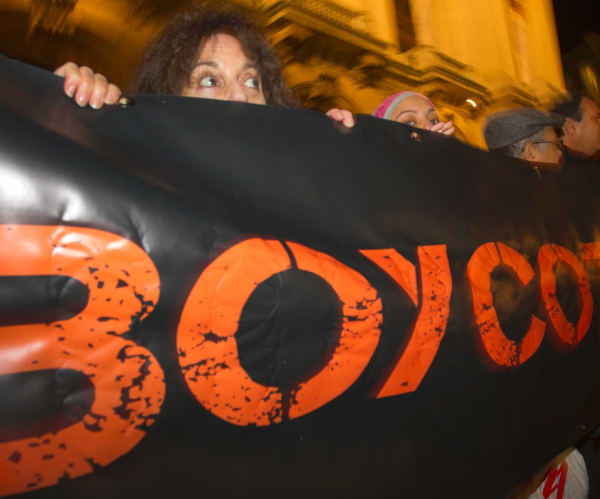 What is Mountain Equipment Co-op (MEC)?

Mountain Equipment Co-op (MEC) is Canada’s largest retail co-operative, selling and renting outdoor gear to its members with a view towards encouraging Canadians to seek recreation outdoors. A lifetime membership (which provides access to MEC merchandise) can be obtained for $5.  As a member-owned co-operative, MEC differs from other organizations in that each member is guaranteed voting rights in board elections, i.e. it functions according to a one-member-one-vote scheme, as opposed to the more traditional one-share-one-vote policy. Each member also has the right to propose resolutions to the board at the Annual General Meeting, which are then voted on by the members.MEC has outlets in all the major cities in Canada. The co-operative prides itself on eco-friendly, sustainable building practices as well as an ethical sourcing policy which monitors working conditions in its supplier factories worldwide and aims to redress injustices suffered by factory workers. MEC sells around 30 products made in Israel, including hydration packs manufactured by Israeli military contractor Source Vagabond Systems.[1]

What is Source Vagabond Systems?

Along with several other Israeli companies, Source Vagabond Systems is a supplier for MEC.  Source Vagabond Systems is also an Israeli company that manufactures military equipment in addition to outdoor gear and clothing. Located south of Haifa, Israel, the company was founded in 1989 by Yoki Gill and Daniel Benoziliyo. As stated on the company’s website, founder Yoki Gill as well as several members of its Research, Development and Design team are former members of elite Israeli Defence Forces units, which “enables [them] to communicate closely with technical military staff and produce tailored solutions for any problems.”[2] The Israeli army has purchased 50,000 of the hydration systems manufactured by Source Vagabond Systems.[3]

As an Israeli military contractor, Vagabond supplies hydration systems to the Israeli Army.  The Israeli Army enforces Israel’s occupation of the West Bank, an occupation which has been cited repeatedly for violations of international humanitarian law as outlined in the Fourth Geneva Convention of 12 August 1949.  As such, Source Vagabond Systems is directly implicated in the legal violations of the Israeli military occupation of Palestinian territories. In providing military supplies to the Israeli army, Vagabond is also in direct violation of Article 3(Section C) of the UN Norms on the Responsibilities of Transnational Corporations and Other Business Enterprises issued in 2003 which states that “[t]ransnational corporations and other business enterprises shall not engage in nor benefit from war crimes, crimes against humanity...other violations of humanitarian law and other international crimes against the human person as defined by international law, in particular human rights and humanitarian law.”[4] The accompanying commentary item (a) on this article also obliges business enterprises which produce and/or supply military products to ensure, through stringent measures, that those products are not used to commit violations of international human rights or humanitarian law.[5]

Because of its use of Source Vagabond Systems as a supplier, MEC itself is in violation of the above-mentioned UN Norms.  These Norms highlight the responsibility of businesses – as organs of society – to promote the rights outlined in the Universal Declaration of Human Rights as well as the norms established in other UN treaties (e.g. the ICCPR and the ICESCR.)

It is also important to note that in July 2005, more than 170 Palestinian civil society organizations issued a call asking the international community to boycott Israeli products in order to promote recognition of the Palestinians’ right to self-determination.  The Palestinian call asked for a boycott of any business or institution participating “directly or indirectly” in the Israeli military occupation of Palestinian territories.  Thus, even apart from Source Vagabond’s links with the Israeli military, socially-justice minded Canadians would still want to boycott MEC in an effort to economically pressure Israel to cease its occupation.

How has MEC’s responded to calls for boycott action against it?

In April 2009, MEC members voted on a resolution proposing a boycott of its Israeli suppliers, which was brought forth by co-op members as required by the rules of procedure. The resolution, which was tabled at the Annual General Meeting on 30 April, 2009 was defeated. However, owing to the unprecedented number of people attending the meeting, around 40 MEC members were locked out of the meeting to respect the local fire code.  Disgruntled MEC members complained that the logistical mismanagement by MEC had hindered the democratic process and prevented members from exercising their voting rights.[6]

An MEC spokesperson has stated that it will not “take sides” in actions concerning the Israeli occupation of Palestine as MEC is “neither a political activist group nor a human rights body.” [7] The co-operative maintains that its ethical sourcing policy is focused solely on workers’ rights and factory conditions and does not extend to other human rights concerns.[8] MEC spokesperson Tim Southam sought to justify MEC’s current position by stating that the co-op looks to Canada and the UN for guidance in matters relating to international politics.[9]  Southam’s position is surprising, given that in the case of South African, states were among the last – long after international civil society – to impose sanctions on the apartheid regime there.  With respect to the UN, the General Assembly annually passes a number of resolutions in condemnation of the Israeli occupation of Palestinian territory.

Although no sanctions have been imposed by the Security Council – the enforcement body of the UN – the state of Israel stands condemned on many levels and by many UN bodies for its ongoing occupation of Palestinian territory.  Accordingly, MEC is in violation of several normative practices prescribed by the UN and undermines it own commitment to adhere to international standards for rights promotion.

When should the boycott of MEC end?

The boycott of MEC will end when Israel ends its occupation of Palestinian territory (and its concomitant violations of international law), or MEC stops carrying Source and other Israeli-made products.

Where can I shop if I boycott MEC?

In what other ways can I pressure MEC to join the boycott?

CJPME‘s boycott campaign is calling upon all individuals and members willing to put pressure on the Israeli government to withdraw from the occupied Palestinian territories. All concerned citizens should visit the CJPME Website for additional tools to pressure MEC to join the boycott:

[2] See www.source-military.com/, the About Us section, where Source Vagabond describes its relationship

[4]  See UN Norms on the Responsibilities of Transnational Corporations and Other Business Enterprises.