CJPME Factsheet 182, published November, 2013: This factsheet provides a historical overview of the population of indigenous people in Palestine, with a focus from the Ottoman period until 1947.

Factsheet Series No. 182, created: November 2013, Canadians for Justice and Peace in the Middle East
View factsheet in PDF format 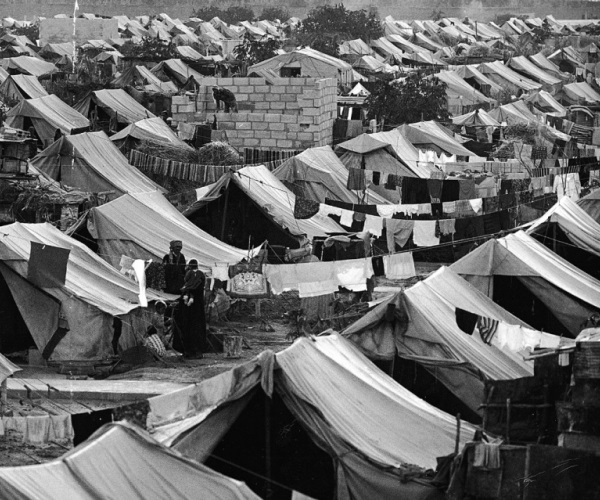 Was there an indigenous population in Palestine prior to 1948?

Yes. The two indigenous populations of historical Palestine (an Arab majority one and a Jewish minority) lived there in relative peace for centuries prior to the Nakba and the creation of the State of Israel. Yet, in the Zionist account of the settlement of the area, Palestine was empty of any population, except the ancestral Jewish community.[i] This myth strongly encouraged Jewish immigration to historical Palestine. Unfortunately, it also paved the road to one of the largest forced displacements in modern history. The demographic statistics for Palestine prior to 1948 allow the record to be set straight regarding this erroneous idea.

What was Palestine’s demographic make-up during the Ottoman reign?

Questionable statistics: The Ottoman empire reigned over Palestinian territory from 1517 to 1917. It is difficult to estimate the population in Ottoman “Palestine” for many reasons. The primary reason is that there was not an administrative district with precisely the same borders as historical Palestine. As well, many residents avoided Turkish census-taking, to avoid the military draft and to avoid being accused of being illegally resident. As well, censuses included neither the Bedouin nor foreigners. Also, Ottoman subjects, be they soldiers, government representatives or merchants, were not taken into account in the censuses.

According to the 1871-72 census, the total population of Palestine, excluding the Bedouin, was 381,954 residents.[ii] Of them, about 85 percent were Muslims (Druze were included in that category by the Ottomans), 11 percent were Christians and 4 percent Jews.[iii] Although these figures remain estimates, they point to the existence of a Palestinian population, moreover, one with a considerable presence.

A dynamic population : In effect, from the end of the 1860s to the beginning of the 1880s, Palestine’s population grew, reaching 470,000 residents in 1882. This increase corresponds with a greater sense of safety in Palestine (with the exception of the 1876-78 Balkan war period), a spreading/increase of agricultural production, a consequent increase in the value of exports and better sanitary and medical conditions. As a result of this economic development and European penetration of the region, the cities would change and the large scale construction took place, notably in Jerusalem, Bethlehem, Jaffa and Haifa.[iv]

The beginning of Jewish Immigration: Jewish immigration to Palestine began toward the end of the 19th century. The first two waves brought between 55,000 and 70,000 Jewish people between 1882 and 1914, principally Russians fleeing anti-Semitism.[v] These migrations, although significant in relationship to the total population of Palestine, constituted only a small fraction of the transoceanic Jewish migratory movements.[vi] On the eve of WWI, Palestine’s Jewish community had risen to 80,000, of a total population of around 738,000 individuals.[vii] 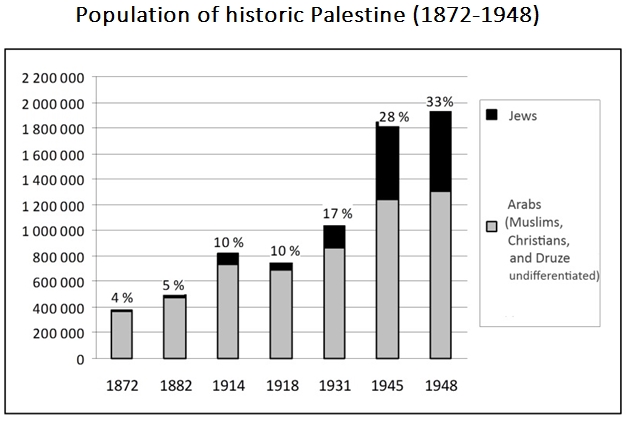 * The percentage figures indicate the proportion of Jews in the total population.

** The total Palestinian population dropped between 1914 and 1918, due to the war and the famine that followed it.

What was Palestine’s demography under the British mandate?

A demographic change : One of the notable developments of the first decades of the 20th century was the progressive Jewish immigration to Palestine, legitimated by the Balfour Declaration of 1917.[viii] This immigration would become more significant in the 1930s, with the Nazi victory in Germany. This would lead to a modification in the composition of the Palestinian population, with Jews becoming an ever larger fraction, as can be seen in the table above.

The Arab population also increased during this period. This growth is attributed to a high birth rate and to the British recruitment of foreign workers from Syria and the Transjordan region (current-day   Jordan, attracted by good salaries.

Although the British statistics are generally better than those compiled under the Ottoman Empire, they are less reliable after the 1931 census, due to the civil difficulties, given the lack of resources invested during WWII.[ix]

What are the main demographic developments in Palestine since 1947?

The Nakba and the denial of the right to return: In 1947-48, during the Nakba, nearly two-thirds of the Palestinians fled or were forced to abandon their homes, and half of the villagers were stripped of their land.[x] Few of them were allowed to return after the war, although the right to return should have been guaranteed. This right has been notably recognised by Resolution 194 of UN General Assembly, and reaffirmed by Resolutions 394, 513 and 3236 of the Assembly. Moreover, according to Article 13.2 of the Universal Declaration of Human Rights, “Everyone has the right to leave any country, including his own, and to return to his country.” In certain cases, for example the Acre region, British videos show that return was possible for a part of the population.[xi] Little information exists on this subject, and that return seems to be the exception. 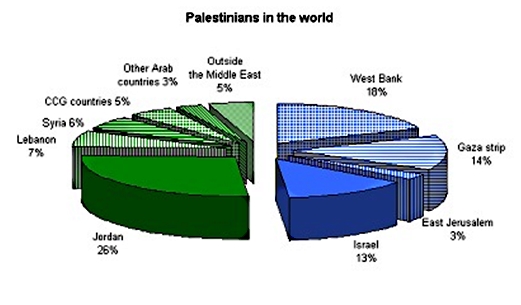 Source : European Institute for Research on Mediterranean and Euro-Arab Cooperation.Palestinians [On-line] http://www.medea.be/fr/pays/territoires-palestiniens-occupes-tpo/palestiniens/ (webpage consulted on May 28 2013).

Today, the Palestinian people number around 10 million individuals[xii], dispersed throughout the world. According to the 2013 estimates, 1,763,387 of them reside in the Gaza Strip and 2,676,740 in the West Bank.[xiii] Nearly 5 million Palestinians are refugees, according to UNRWA, of which 1.5 million live the refugee camps (in the West Bank, Gaza, Jordan, Syria and Lebanon.[xiv] It is difficult to re-census the total Palestinian population, given that many Palestinians are now, after many generations, established in foreign countries.

Estimate of the Palestinian population in the world, by country of residence in 2010

Israel’s illegal “settlement enterprise”: Since 1967, successive Israeli governments have encouraged Jewish Israelis to establish illegal “settlements” in the occupied Palestinian territories. Currently over half a million such “settlers” live in East Jerusalem and elsewhere in the West Bank, dramatically shifting the demographic composition.

[viii] In a letter written in 1917, Lord Balfour expressed Great Britain’s agreement to the establishment of a Jewish homeland in Palestine, with the proviso that “nothing shall be done which may prejudice the civil and religious rights of existing non-Jewish communities in Palestine...”