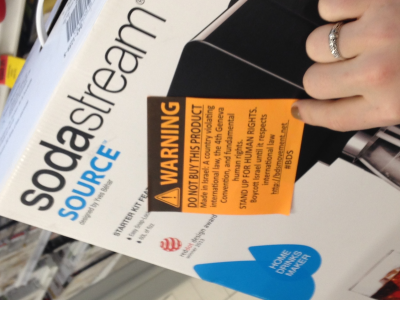 Montreal, February 19, 2015  — In light of ridiculous theatre in Canada’s parliament this week, Canadians for Justice and Peace in the Middle East (CJPME) openly launches a creative new campaign to deepen the “Boycott Israel” movement in Canada.  CJPME was specifically cited in the parliamentary motion targeting organizations supporting economic action against Israel, and CJPME has launched its new campaign in response.  CJPME’s campaign invites Canadians from across the country to sign up for a packet of free “Boycott Israel” sticky notes.  CJPME invites Canadians to go to local stores and post these on Israeli merchandise, thus warning potential buyers against buying products from Israel.

The “Boycott Israel” sticky notes read: “WARNING!  DO NOT BUY THIS PRODUCT.  Made in Israel: A country violating international law, the 4th Geneva Convention, and fundamental human rights.  STAND UP FOR HUMAN RIGHTS. Boycott Israel until it respects international law.  http://bdsmovement.net  #BDS.” 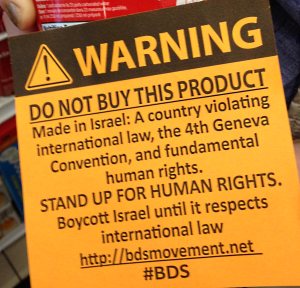 CJPME’s new campaign is part of the broader international Boycott, Divestment and Sanctions movement (BDS) targeting Israel with economic pressure until it respects international law.  Israel is in long-time violation of dozens of UN resolutions, and has been regularly cited for human rights violations against Palestinians for literally decades.  CJPME tends to focus on the "B" (Boycott) part of the movement, as CJPME seeks to promote aspects of the BDS movement in which the majority of Canadians can participate in support of human rights in Israel-Palestine.

The BDS is a legitimate means of protest and pressure, is neither “anti-Israel” nor “anti-Semitic,” and is in response from a specific 2005 call from Palestinian civil society.  The BDS movement is deliberately non-violent, is grounded in principles of international law, and condemns unjust behaviour. When the injustices perpetrated by Israel end, so will the BDS action.  CJPME observes that the goals of BDS actually align with Canada’s official foreign policy positions on Israel-Palestine.

“Like many Canadians, I am shocked and upset by politicians’ seeming willingness to threaten and undermine our cherished Canadian right of freedom of speech,” declared Thomas Woodley, President of CJPME.  “Even if they may disagree with our words or our actions, politicians with any conscience would still stand up for our right to voice our opinion,” continued Woodley.  CJPME has launched its new “Boycott Israel” sticky note campaign in direct response to parliament’s ill-conceived motion and threats.

CJPME also points out that there are many blatant errors in the Conservative Party’s motion against BDS, and encourages Canadian media and politicians to take the time to understand the written and legal basis for BDS.