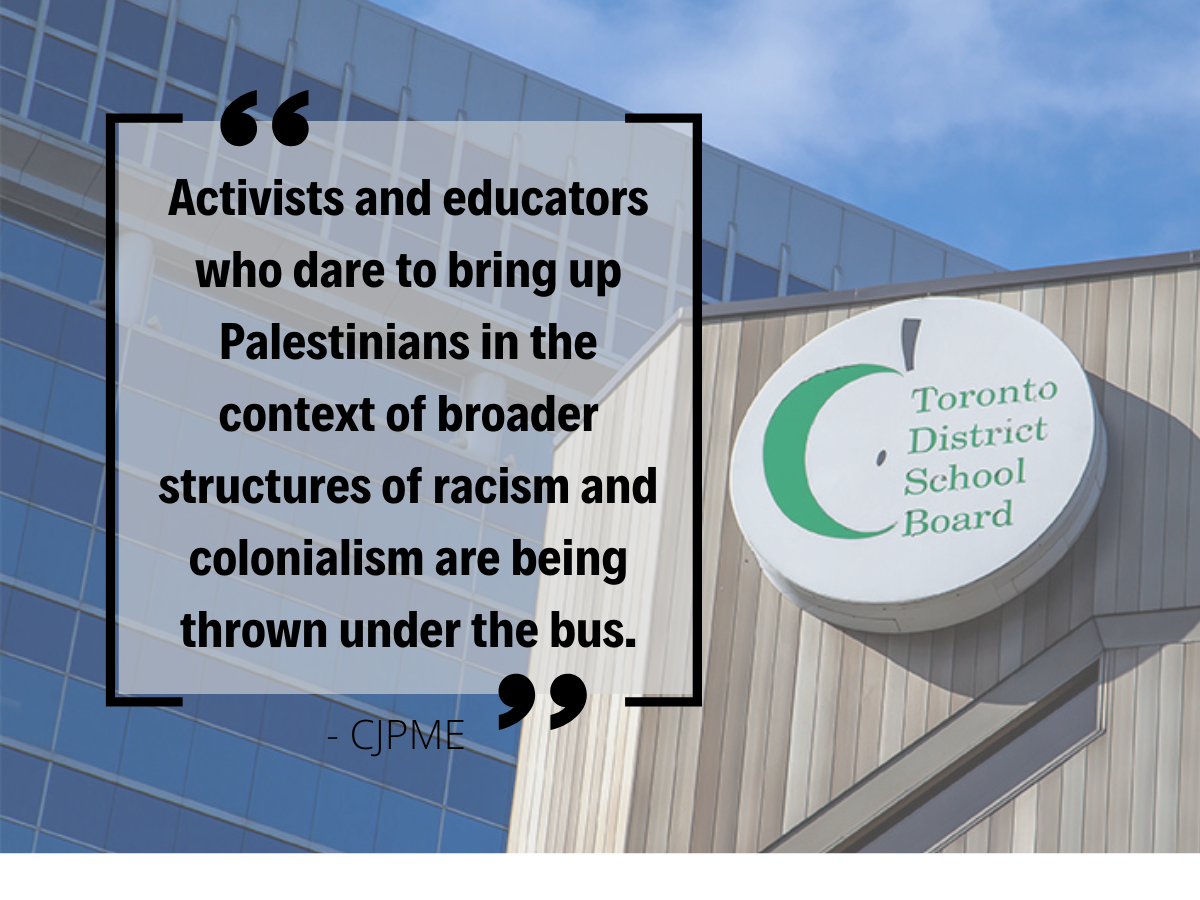 Montreal, September 30, 2021 — Canadians for Justice and Peace in the Middle East (CJPME) is extremely concerned about a pattern of anti-Palestinian racism in the Toronto District School Board (TDSB) after a series of instances in which the board has reprimanded or disavowed voices who spoke about Palestinian human rights. Most recently, the board apologized for causing “harm” after journalist and activist Desmond Cole spoke about Palestinian rights during an event about anti-Black racism. CJPME is also deeply troubled that TDSB intends to hire a pro-Israel lobby group - with a history of trying to silence academic critics of Israel - to design classroom resources on “anti-Palestinian and anti-Israel sentiments.”

“Together, these incidents add up to a pattern of institutional anti-Palestinian racism in the TDSB,” said Michael Bueckert, Vice President of CJPME, “Activists and educators who dare to bring up Palestinians in the context of broader structures of racism and colonialism are being thrown under the bus.” CJPME warns that this sends the message that Palestinian human rights do not matter, and that their struggles cannot be viewed through anti-racist or anti-oppression frameworks. “This ‘Palestine exception’ when it comes to anti-racist education is, frankly, racist,” added Bueckert.

The TDSB’s unnecessary apology follows a smear campaign against Desmond Cole led by Friends of the Simon Wiesenthal Centre and the Toronto Sun, who have accused him of antisemitism for saying “Free Palestine” in a professional learning session on racism. Cole spoke about the need to include Israel’s treatment of Palestinians in discussions about racism and settler-colonialism, showing the intersectionality and commonality between struggles against oppression and injustice. The TDSB is now claiming that this caused “harm.” This incident comes several months after the TDSB took disciplinary action against anti-oppression educator Javier Davila for sharing resources on Israel and Palestine on an opt-in list-serve for educators. He was later reinstated.

CJPME is also alarmed that the TDSB is preparing to hire a staff person from the Centre for Israel and Jewish Affairs (CIJA), a pro-Israel lobby group, to design classroom resources on “anti-Palestinian and anti-Israel sentiments.” CJPME argues that this is particularly inappropriate considering CIJA’s role in the recent “Azarova affair” at the University of Toronto, exposing the organization’s censorious approach to education about Palestine. CJPME would also consider it much more appropriate for a respected academic to fill this role, rather than the representative of a lobby group.

According to public reporting and court documents, CIJA intervened in a confidential UofT hiring process with the intention to block the appointment of Dr. Azarova, based on her scholarship which is critical of Israel’s occupation. Armed with a dossier on Dr. Azarova provided by the pro-Israel group NGO Monitor, CIJA encouraged former CIJA director and federal tax judge David Spiro to contact university administration about the matter on their behalf. Within days, the job offer to Dr. Azarova had been rescinded by senior administration. This resulted in a rare censure by the Canadian Association of University Teachers, which was partially lifted when the UofT re-offered the job to Azarova, but the damage to academic freedom was done.

Given CIJA’s recent role in suppressing academic freedom on Israel and Palestine, CJPME is perplexed that TDSB would seek their assistance for designing educational materials on the issue. CIJA has demonstrated that it considers criticism of Israel’s occupation and human rights abuses to be disqualifying. CJPME has no confidence in the ability of the TDSB to provide resources which will acknowledge the real racism and oppression faced by Palestinians, and warns that this will result in the further censorship of Palestinian perspectives.