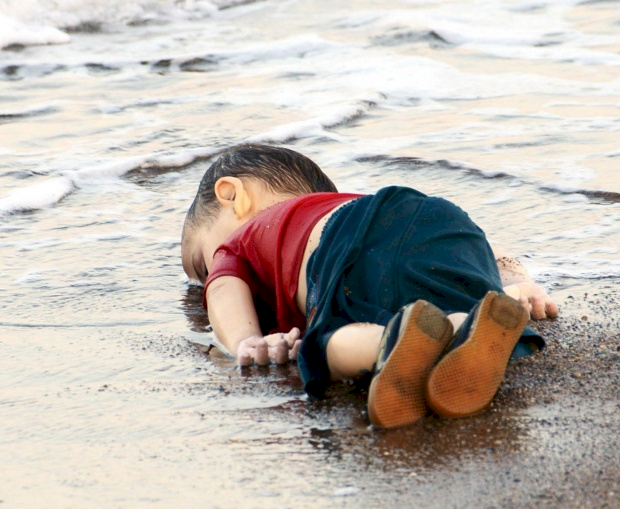 The tragic picture of 3-year-old Aylan Kurdi, drowned off Turkey as he and his family fled Syria as refugees, should be the final straw!  Please call for the resignation of Chris Alexander as Canada’s Minister of Citizenship and Immigration!

Minister Chris Alexander excuses himself and his government saying that Kurdi’s family did not actually have a refugee file with Canada.  Nevertheless, Kurdi’s aunt, sought to sponsor both of her brothers’ families,[i] and Canadian sponsorship rules limited her to just one of the families.  Aylan Kurdi’s aunt chose to try to sponsor her older brother – a choice that was perhaps a macabre “happy coincidence” for Minister Alexander.  But ultimately, the older brother’s family was rejected by Canada anyway.  What’s more, Alexander was personally handed a file by NDP MP Fin Donnelly, which mentioned the urgent need of both families.  Alexander ignored the file. [ii]

But the tragic picture of 3-year-old Aylan Kurdi, and his family’s tragic story are only the latest chapter in Alexander’s mean-spirited, arrogant, and racist tenure as Minister of Citizenship and Immigration.

According to Geraldine Sadoway and Andrew Brouwer, two refugee lawyers in Toronto, “Canada has been closing every possible avenue of access for refuges.”[iii] Canada’s actions have been both quiet and systematic, driving asylum seekers “into the hands of smugglers who are reaping profits at the expense of the lives of desperate people.”[iv]

Alexander and the Canadian government have been imposing visa requirements, sanctioning airlines and shipping lines that bring in people without satisfactory documentation.  It has also been penalizing people who assist refugees to reach Canada, denying refugees the opportunity to bring family into the country with them, restricting refugee seekers to enter Canada through the United States, and increasing the number of administrative control points a refugee must pass through in order to enter the country.[v]

The numbers speak for themselves. The number of people claiming refugee status in Canada reached a “historic low”[vi] of 10,356 in 2013,[vii] according to Ottawa[viii] — less than half the average of previous years. To help illustrate the degree of Canada’s anti-refugee measures, immigration reporter Nicholas Keung compared our country to Sweden,[ix] a fellow OECD member of 9.6 million people. While in 2014, Canada received 13,500 asylum claims—about one-third more than the year before—the small Nordic country admitted 75,100 refugees in the same period; roughly five times more asylum claims than Canada, despite the fact that Sweden has a quarter of Canada’s population and a fraction of its landmass.

To date, the Canadian government has committed more than $700 million to respond to the Syrian crisis,[x] only half the $1.4 billion it provided to Haiti since 2006.[xi] Worse, war-ravaged Syria received only $110 million in 2014, considerably less than what Canada’s largest aid recipients got the same year—Ethiopia ($186 million), Tanzania ($180 million), and Mozambique ($133 million).[xii]

Alexander and his Conservative government were heavily criticized for failing to meet an earlier commitment to resettle 1,300 Syrians by the end of 2014, following an appeal by the United Nations Refugee Agency to resettle 100,000 refugees worldwide.[xiii] Canada then committed to resettling 10,000 more Syrian refugees over the next three years,[xiv] but many questioned Canada’s resolve. Between 1975 and 1985, Canada accepted 110,000 Indochinese refugees,[xv] eleven times the amount Ottawa has assigned for Syrians. And most of those “new” 10,000 are to come to Canada under private sponsorships (churches, etc.), as Alexander and the government refused to offer another humanitarian cent for Syrian refugee resettlement.

Worse, in a very controversial manner, Ottawa fails to prioritize Syrian refugees whose families are already in Canada – like the family of Aylan Kurdi. And even worse, in a highly controversial move, the government said it will “prioritize” Syrian refugees based on ethnic and religious grounds,[xvi] a move clearly intended to discriminate against Syrian Muslims, who make up over 85 per cent of Syria’s population.[xvii]

3-year-old Aylan Kurdi is a heart-breaking symbol of the failure of Alexander and Canada to respond in a humane and moral way to the greatest refugee crisis since World War II.  Chris Alexander, spare us the empty promises and the lame excuses, and resign from public life!

[iii] “Opinion: Canada is failing in its responsibilities to refugees.” Montreal Gazette. 1 May 2015. http://montrealgazette.com/news/national/opinion-canada-is-failing-in-its-responsibilities-to-refugees accessed June 1, 2015