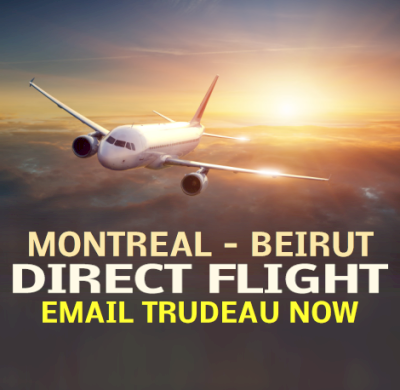 Since June, 2003, the Canadian government has refused to grant a license for flights between Montreal and Beirut.  In the meantime, British Airways, Alitalia, Lufthansa, Air France and other airline companies have launched and maintained regular direct flights to the capital of Lebanon.

It is estimated that the number of Lebanese-Canadians in the Montreal area is close to 250,000.  It is believed that the Lebanese-Canadian community is the largest ethnic community which is not served by a direct flight.  Even Denis Coderre asserted that his dream is to have a direct flight Montreal-Beirut.  The only obstacle to airlines establishing this service is the fact that the Canadian government refuses to grant the necessary licenses.

Demand that the government grant the licenese required to establish direct flights between Montreal and Beirut:

For more information, see a recent op-ed in the Huffington Post Canada on Canada's refusal to grant these licenses.