Celebrate our Accomplishments of 2015 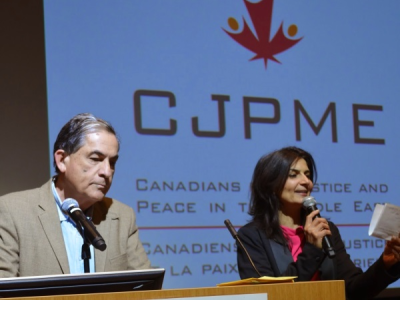 We have been referring to 2015 as a year of both great elation, and high urgency. Elation, because 2015 has been such a successful year for CJPME, with so many accomplishments. Urgency, because the needs are so great, and there’s so much more we feel we can and must do. Take a look at the summary of our year below to get a feel for both the accomplishments and challenges.

If you value our work, please consider a year-end contribution. You can donate on-line here or by calling 438-380-5410.

Like many Canadians, CJPME was happy to see the Harper government go, and we have gotten lots of feedback that suggests that we were one of several groups in Canada which helped to turn the tide of public opinion. In addition to other efforts, our Elections Guide addressed 13 specific foreign policy issues since the last election, and analyzed each party’s response to each issue. The document was released in sections in the run-up to the election, and the feedback was fantastic.

Challenges ahead with new Liberal Government.

Over the summer, CJPME invited Canadians to join it to co-sponsor Syrian refugee families under a Quebec program. The response from CJPME’s support base was fantastic, and by the end of the year, CJPME will have launched the sponsorship paperwork for 5 refugee family groups.

The government and many organizations are ramping up to meet the Syrian refugee needs in Canada. CJPME has been meeting with government and local organizations to ascertain the needs, and develop a plan which addresses key service gaps in Canada. CJPME wants to dramatically expand its own refugee sponsorship work, but also wants to help average Canadians launch the sponsorship process themselves.

Insights on the crisis in Syria, with Robert Fisk.

CJPME was pleased to host veteran Middle East Journalist Robert Fisk in Canada for 7-city tour, stretching from Victoria, BC to Montreal. In advance of the Canadian elections, many were rethinking Canada’s role vis-à-vis ISIS, and the Syrian civil war. Fisk’s lectures focused on the war in Syria and the chaotic – and often hypocritical – international response to the ongoing crisis and carnage. Extensive media coverage of Fisk’s tour included the Toronto Star, the Montreal Gazette, the Hamilton Spectator, the CBC and others.

Islam and the West, Fear and Fanaticism, with Tariq Ramadan.

In November, CJPME was excited to welcome author and academic Tariq Ramadan for a series of three political talks in Toronto, Ottawa and Montreal. These talks came just one week after ISIS terrorists had launched attacks in Paris, Beirut and Baghdad, and public interest was extremely high. Ramadan, an expert on Islam and the West, challenged Canadians to engage fully in Canada’s democratic institutions and to challenge the government to maintain equitable policies abroad. With a crowd of 1300 in Montreal, Ramadan’s events were among the largest ever hosted by CJPME.

Launched in 2014, CJPME has been touring the exhibition, Dispossessed but Defiant: Indigenous Struggles from around the World continuously. Produced by the CJPME Foundation, the exhibition highlights the common experiences faced by blacks under apartheid in South Africa, Canada’s Indigenous peoples, and the Palestinians. Since the beginning of 2015, it has been seen by thousands of Canadians as it has toured through St. John’s NL, Charlottetown, PEI, Moncton, NB, Quebec, QC, Hamilton, ON, Calgary, AB, Vancouver, BC and sites on Vancouver Island.

While doing events and exhibitions are essential for public awareness, CJPME also works hard to positive media coverage for Palestinian and other important human rights concerns in the Middle East. While CJPME reps had some great opportunities to appear on national television and print media through 2015, we were also able to line up literally dozens of important media interviews for the three prominent speakers we hosted through the year.

Prior to the Fall elections fever, CJPME delegates met with members of Parliament near the end of the Spring session to talk about the government’s assault on the Boycott, Divestment and Sanctions (BDS) movement in Canada. Delegates presented position papers which critically addressed the government’s opposition to BDS, and challenged the government either to get on-board with BDS, or find other ways to get serious about a just peace between Israel and the Palestinians.

CJPME delegates on Parliament Hill to meet with MPs.  CJPME always brings both English-speaking and French-speaking teams when conducting a delegation.

CJPME was honoured to host Haaretz journalist Gideon Levy in March on an 8-city tour of Canada, including Montreal, Ottawa, Toronto, Hamilton, Edmonton, Calgary, Victoria and Vancouver. While the eight local events were all very well-attended, Levy’s appearance on CBC’s Sunday Edition also reached an additional 1.3 million Canadians. In addition to his appearance on Sunday Edition, CJPME and its supporters were able to secure many more prominent media placements for Levy and his message in support of Palestinian human rights.

Action to oppose the criminalization of BDS activities.

Early in the year, after the various steps the Harper government has taken to potentially criminalize activism in the BDS movement, CJPME launched a campaign to mobilize Canadians to speak out. The response from across Canada was very strong, with literally thousands of Canadians emailing their local MPs telling them that they should oppose this move by the government at all costs. As a result of the efforts of CJPME and other groups and individuals, the government backed away from its extreme position on BDS.

CJPME tracks and critiques crises across the Middle East.

Never has the Middle East been in such crisis, and CJPME has done its best to critique human rights abusers as systematically as possible, and to demand action from the Canadian government. From the shooting of a Canadian by an Israeli Army sniper in Bethlehem, to Canada's dismal support for Palestinian human rights. From the humanitarian crisis facing Yemen, to the democratic crisis facing Egypt. From Mohamed Fahmy’s plight in Egypt, to the plight of millions of Syrian refugees spread throughout the region. These and many other issues keep us busy analyzing the crises and advancing statements and recommendations. Despite our limited resources, we continuously bring these issues to the media and the public, and seek to influence policymakers to address the most dire situations.