Celebrate our accomplishments of 2016 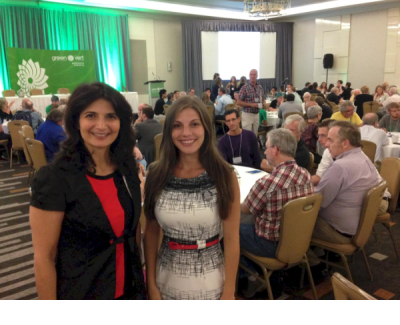 2016 has been one of CJPME’s most outstanding years.  It’s been an exceptional year not only because we’ve had some key wins, but also because we feel we’re on track for even more success in the months and years ahead.  Please take a look at the summary of our activities below.

For six months, CJPME did everything it could to ensure that the Green Party passed a BDS resolution.  Grace Batchoun and other CJPME members were at both the August and December meetings, handing out BDS flyers, and engaging party members in conversation about the resolution.  Says Grace, “It really felt like we were making history, and Green Party members on the floor really welcomed our message.”  CJPME mobilized members several times throughout the campaign: encouraging the Green Party leaders, and encouraging people to get involved.  Successful BDS resolutions at both meetings were hugely gratifying.

CJPME was present at the Green Party convention both in August (left) and in December (right.) In both cases, important BDS resolutions passed - a huge success for the BDS movement in Canada. Next up, the NDP!

Since the beginning of the year, CJPME was pushing the Trudeau government to resume funding to the UN aid agency for Palestinian refugees (UNRWA.)  We mobilized thousands of Canadians to email their MP and the Minister of International Development.  We also spearheaded a letter signed by dozens of organizations, including several key unions, asking for the government to restore this funding.  We also met with Stéphane Dion, Minister of Foreign Affairs, and discussed the issue at length.

Happily, our efforts were rewarded in November when the government announced $20 million for UNRWA’s core programs, and $5 million for emergency aid.  Most gratifying, however, was UNRWA’s letter of thanks directly to CJPME, stating “We are very cognizant and appreciative of the May 12 multi-organizational letter to Minister Bibeau that CJPME sponsored as well as the many other individual petitions and communications with Members of Parliament and Global Affairs Canada that CJPME helped organize… Canada’s renewed support… is making a significant and positive difference to the Palestine refugees we serve.”

CJPME's UNRWA funding campaign resulted in $25 million in new Canadian funding for Palestinian refugees. CJPME leaders were personally thanked by UNRWA for its work on this file.

Throughout the year, CJPME took many important steps to market the need to boycott Israel for its human rights violations:

CJPME's BDS videos in the fall reached 150,000, with comments like: "Thank you so very much. It is a great video shows the reality of the BDS movement." "Totally awesome video guys! Keep up the great work!"

CJPME delegates went to Parliament Hill again and again through the spring and summer and met with close to 100 MPs in one-on-one meetings. We developed position papers, and advocated for better government positions on several different topics, including:

CJPME meets with Foreign Affairs minister Stéphane Dion (left) in Ottawa in September.  CJPME hosted delegations to Parliament Hill on many different occasions through 2016 and met with almost 100 different MPs in one-on-one meetings.

Unable to stand by idly as the Syrian civil war ground on, CJPME raised funds and began co-sponsoring Syrian refugees to come to Canada. All eight families have been approved, and CJPME eagerly anticipates the arrival of these families.  Dozens of Canadians joined in with CJPME’s efforts, and contributed to CJPME’s Syrian Refugee Fund. Click here for more info.

CJPME also met with politicians to positively influence Canadian policy on Syrian refugees. We appealed to dozens of MPs for greater numbers of Syrian refugees, and greater government funding for sponsorships.

Media Advocacy Centre and many more op-eds.  After several months of development, CJPME launched its new “Media Centre” platform in the summer.  The platform allows for the collection of “problem” media articles. It also allows for the issuing of “media alerts” to push mainstream media to provide better coverage in the Middle East, especially Israel-Palestine.On several occasions through the summer and fall, the response through our Media Centre forced the media to correct and/or improve poor and erroneous coverage. If you want to be involved, sign up to be a “Media Responder” here.

CJPME also made the strategic decision to reach more Canadians through op-eds it would publish. Through the fall, two CJPME staff averaged an op-ed per week, and reached thousands of Canadians on our issues. One article – on parliament’s anti-Islamophobia motion – reached a massive number of people, and garnered 50,000 Facebook likes!

CJPME has co-sponsored eight Syrian refugee families since the beginning of the year, and has pushed hard for more Canadian humanitarian aid for Syrians and Iraqis.

CJPME was busy all year countering BDS legislation in Canada.

CJPME was one of several Canadian groups which got excellent media attention for questioning the Trudeau government’s decision to go ahead with the $15 billion Saudi arms contract for Light Armoured Vehicles. CJPME signed a joint letter with Amnesty International and other organizations calling the government to rethink its actions.  CJPME also met with dozens of MPs challenging this decision, and admonishing the government for delaying signing the Arms Trade Treaty.

CJPME speaks out authoritatively on important, timely issues: CJPME has issued PRs and Position Papers on key issues since the beginning of the year.  Some of the highlights are below:

Since the beginning of the year, CJPME has published timely factsheets for Canadian audiences.

Like the Duracell Bunny, our exhibitions just keep going!

CJPME continued to partner with local groups to host the exhibition, Dispossessed but Defiant: Indigenous Struggles from around the World, throughout the year.  Produced by the CJPME Foundation, the exhibition highlights the similarity in the struggles of the Palestinians, Canada’s Indigenous peoples, and the blacks under Apartheid South Africa. In 2016, the exhibition was successfully displayed in London, ON, Kingston, Gatineau, Saskatoon, and at the World Social Forum in Montreal.