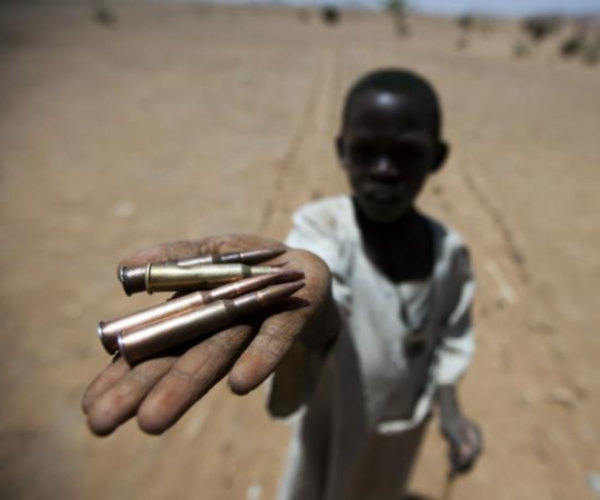 From the month of May to October 2017, CJPME worked with other Canadian disarmament groups to develop a critic of the government's bill C-47.

This document is a joint submission by CJPME and it's civil society partners.

On April 13, 2017, Minister of Foreign Affairs Chrystia Freeland tabled in Parliament Bill C-47 — An Act to amend the Export and Import Permits Act and the Criminal Code (amendments permitting the accession to the Arms Trade Treaty and other amendments). According to Global Affairs Canada, the proposed legislation aims to “to enhance transparency and accountability in Canada’s export controls” and to allow Canada to “fully comply with the [arms trade] treaty.”

Our organizations have been ardent champions of  Canada taking the important step of  acceding to the Arms Trade Treaty and welcome the government’s intention to do so.

In that spirit, a coalition of Canadian organizations from the human rights, security policy and development fields — represented by the undersigned — wishes to bring to the attention of the Minister of Foreign Affairs, the Standing Committee on Foreign Affairs and International Development, and other Parliamentarians and government officials, a number of pressing concerns about Bill C-47.

In short, we consider the Bill inadequate to align Canada with the objectives, expectations and specific obligations of the ATT. As presently drafted, Bill C-47 requires important revisions to effectively ready Canada for full compliance with the ATT.

While in principle we welcome Canada’s membership in this landmark treaty, we cannot support Bill C-47 in its current form.

Our top concerns about the bill are described herewith.

1. The majority of Canada’s military exports will remain unregulated.

Neither the existing Export and Import Permits Act (EIPA) nor its amendment under Bill C-47 make reference to the U.S.-Canada Defence Production Sharing Agreement that, since the 1950s, has exempted Canadian military exports to the United States from the government authorization required for other arms exports. Moreover, given that the Global Affairs material released with Bill C-47 has raised other regulatory issues and not the US situation, it is safe to assume that the government has no plans to end the exemption of exports whose value exceeds the combined worth of arms exports to all other states. This massive hole in Canadian military export authorization represents the most significant ATT obligation that will continue unmet by Bill C-47 or new regulations that may follow. The exemption breaches the Treaty’s first article which states that the “object of  this Treaty is to establish

the highest possible common international standards for regulating … the international trade in conventional weapons.” It also breaches Article 2 (Scope) and Article 5 (General Implementation), both core articles of  the Treaty.

Article 2 states that “this Treaty shall apply to all conventional arms within the [treaty] categories” and Article 5 states that “each State Party shall implement this Treaty in a consistent, objective and non-discriminatory manner”.

2. The majority of Canada’s military exports will remain unreported.

Due to the US export exemption, since they began in 1991 all Reports on the Export of Military Goods have omit- ted data on military exports to the US. This data omission undermines the government’s announced commitment to greater Canadian transparency and clearly fails to meet ATT reporting requirements. Nothing in Bill C-47 or in the backgrounder material provided by Global Affairs Canada suggests that the government plans to fill this major reporting gap. Again the reporting omission will constitute a breach of the Treaty objective to establish the highest possible common international standards.

3. Military exports by the Department of National Defence will be regulated under a separate process.

The Department of National Defence, as a Crown agency, is exempt from the EIPA. Since the Crown is bound by international law, following Treaty accession DND will be bound by ATT obligations when it seeks to export military equipment as surplus sales or aid. When queried on why Bill C-47 does not include DND obligations, Global Affairs Canada officials explained that DND will meet Treaty standards via procedures -- including risk assessments -- distinct from GAC export controls. The dual process is thus an invitation to different, possibly contradictory, standards and outcomes. In the past DND has transferred equipment in contravention of the EIPA. For example, DND provided 2500 surplus assault rifles to the Afghanistan Army in 2008 despite Afghanistan’s absence from the EIPA Automatic Firearms Country Control List, the list of the only countries eligible to receive automatic firearms from Canada.

4. The important role of the Canadian Commercial Corporation remains unacknowledged and unchanged.

The CCC is a Crown corporation that plays a central role in exporting Canadian military goods, especially to the United States. The terms of the Defence Production Sharing Agreement obligate the CCC to act as prime contrac- tor for US Department of Defense contracts valued above a threshold, currently set at US $150,000. The CCC also arranges arms exports to other countries, including recent record contracts for the sale of light armoured vehicles (LAVs) to Saudi Arabia. Government responsibility for, and oversight of, the CCC should be made explicit in the EIPA alongside CCC procedural changes to ensure its operations meet ATT obligations.

Recent events suggest that CCC may not adhere even to existing EIPA regulations. For example, media reports confirmed that when the unprecedented LAV deal with General Dynamics Land Systems Canada was announced

in February 2014, Global Affairs Canada had not authorized the export permits needed for the vehicle shipments. These were only formally approved by then Foreign Affairs Minister Stéphane Dion in April 2016. The lengthy pe- riod between CCC contract signature and export authorization exposed a major, troublesome, and potentially costly fault-line in Canadian export control that needs to be corrected.

5. Bill C-47 does not alter Cabinet exemption powers that could undermine Treaty obligations.

The Regulations section of  the EIPA – including that of  the amended law under Bill C-47-- grants broad powers to the Cabinet, notably the power to exempt any person, organization, technology or goods from the provisions of the Act. Without strict boundaries being placed on the conditions for exemption, this could become a loophole to undermine full and consistent implementation of  the ATT.

The government has indicated that some export control changes necessary for Canada to accede to the Arms Trade Treaty will be formulated as regulations to follow Royal Assent of Bill C-47. This means that many details of Canada’s implementation of  significant treaty obligations will be unknown to Parliament as Bill C-47 is reviewed and debated. Specific questions and concerns about this future undetermined process include:

6. What standards and procedures will Canada use to authorize arms exports?

In its backgrounder to the tabling of Bill C-47, the government states that “the bill formalizes this accountability process [based on the export assessment obligations of Article 7 of the ATT] by establishing a new legal obligation for the Minister of Foreign Affairs. The factors that the Minister must take into account, under the ATT, will be listed in a new regulation, which will be enacted following Royal Assent. ” The problem is that, until this regulation is presented, parliamentarians and observers will not be able to judge how effective the government has been in meeting its commitment. And since Article 7 contains some of the most important Treaty obligations, the govern- ment needs to demonstrate that it has got these right.

7. How will Canada meet the prohibition obligations of the ATT, such as UN arms embargoes?

ATT prohibitions are binding obligations not subject to assessment or review. Yet, neither the current EIPA section on “Prohibitions,” nor the proposed amendments of Bill C-47, addresses Article 6 of the Treaty, the core article which defines prohibitions. These include conventional weapons transfers that would violate UN Security Council sanctions, “in particular arms embargoes.” Canada’s United Nations Act does administer Canadian obligations regarding UN sanctions but there is no reference to the UN Act in the EIPA or in Bill C-47.

Similarly, the ATT prohibits arms transfers that “would violate [a State Party’s] relevant international obligations under international agreements to which it is a Party, in particular those relating to the transfer of, or illicit traf- ficking in, conventional arms.” Relevant agreements for Canada include the Anti-Personnel Mine Ban Convention (the “Ottawa Convention”), the Cluster Munitions Convention, the UN Firearms Protocol and the OAS Firearms Convention (CIFTA). Currently, none of these international agreements appear in the EIPA, even though the act references several multilateral and bilateral trade treaties. It is not even apparent if or how Canada will address pro- hibition obligations through proposed regulation.

8. What formal steps will Canada take to prevent the diversion of its military exports?

The diversion of weapons to unauthorized end users or for unauthorized end purposes is a universal concern important enough to rate its own article (11) in the ATT. Yet, as with prohibitions, the two EIPA paragraphs refer- ring to diversion do not address ATT provisions and Bill C-47 contains no amendments to alter this situation. The Treaty obligates each State Party to assess the risk of  diversion as well as to undertake other measures to reduce and prevent diversion. Although Canada currently considers “the possibility of unauthorized transfer or diversion” within its export control process, diversion is not currently one of the criteria for “close control.”

9. How will Canada meet and advance Treaty reporting standards?

Bill C-47 includes a welcome amendment to the “report to parliament” section of the EIPA that will require the Minister to provide a report to parliament on the export of military goods for the preceding year by May 31 of each year. However, the amendment says nothing about reporting on imports (also required by the ATT) or about the details that the parliamentary report will provide. It seems likely that the annual export report will build on the reporting standards the government has used since 1990 but there are at least two reasons why these need close parliamentary and public scrutiny. First, reporting and transparency standards of past reports have varied signifi- cantly over the years, subject to seemingly arbitrary changes at times. Second, if handled well, Canada’s export reports could contribute to the “highest possible common international standards” in ATT reporting. Good stan- dards would include, for example, Canada reporting the details of both export authorizations (permits) and actual exports, currently reporting options under the Treaty.

10. What are the full details of the welcome brokering regulations?

Arms brokers arrange and facilitate weapons transfer transactions between buyers and sellers. A transnational problem, illicit arms brokering, especially of small arms and light weapons, is widely acknowledged to contribute significantly to worldwide crime, conflict and serious violations of international human rights and humanitarian law. Bill C-47 will amend the EIPA to include welcome broker and brokering controls to fulfil obligations of the Brokering Article of the ATT (Article 10). These include explicit extraterritorial application of the EIPA to Canadian citizens, permanent residents and organizations incorporated in Canada. While Bill C-47 does amend the EIPA to include brokering within Canadian export controls, some important details will await future regulation. For example, Bill

C-47 includes a new “Brokering Control List” containing items defined only as “any article that is included in the Export Control List the brokering of which the Governor in Council considers it necessary to control.”