CJPME Political Blog, March 8, 2015: If you haven’t seen Jon Stewart’s spoof on Netanyahu’s speech to the US Congress this past week, it’s well worth the viewing. Among many other things, Stewart contrasts several different video clips of Netanyahu across the years, and demonstrates how self-contradictory, and flat-out wrong Netanyahu has been concerning Iran, Iraq, and other regional developments. 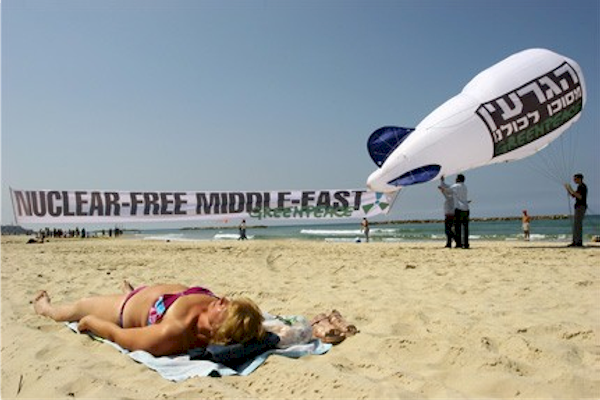 Indeed, Netanyahu’s speech to the US Congress was an exercise in hubris.  As Stewart jokes, with Israeli elections less than two weeks away, Netanyahu used the US Congress as “the most elaborate campaign commercial backdrop ever.”

Seriously, however, how can the Israeli PM suggest in his speech that US-Iran talks would “pave the way” for a nuclear arms race in Middle East?  If Israel itself didn’t have nuclear weapons, there’d be nobody to “race” with.  And how Netanyahu can make such a statement without being challenged is the sad paradox of the US-Israeli relationship.

Israel introduced nuclear weapons to the Middle East, yet it is not a signatory to the Non-Proliferation Treaty (NPT). As a result, it does not abide by nuclear anti-proliferation conventions and is not subject to inspections by the International Atomic Energy Agency (IAEA). Israel should be compelled to sign the NPT so as to build confidence in the region, to prevent proliferation, and ultimately to permit disarmament.

If Iran is a potential nuclear threat, Israel is a very real one.  In one publicly documented example, just after the start of the “Yom Kippur War” in 1973, the Israeli government put a number of nuclear arms on alert.  Among other targets, some warheads were aimed at the Egyptian and Syrian military headquarters near the metropolises of Cairo and Damascus.[1]

CJPME, for its part, has long advocated a “nuclear weapons free zone” in the Middle East.  Under several governments, Canada has supported UN resolutions favouring such a nuclear free zone.  Sadly, however, Canada has often abstained from such votes claiming that Israel was “being singled out.”  Yet it is not far-fetched to believe that Israel’s nuclear program is the primary reason its neighbours – Syrian, Iran, perhaps others – desire to obtain the technology.

The current Iranian government is unpredictable, and it is certainly no champion of human rights.  Canada, the US, and the rest of the world should keep a close eye on it.  Yet the world should also consider the continued price of sanctions on the population of Iran.  The Iranian economy struggles immensely under the effect of sanctions, and millions of Iranians suffer needlessly as a result.  And while pharmaceuticals and medical equipment are excluded from sanctions, shortages of drugs for dozens of illnesses continue to exist because Iran is prevented from using international payment systems.

It is right to be vigilant about which countries have access to nuclear technology.  But political positions on this issue should be consistent.  If the world is uneasy with Iran having the bomb, it should also be uneasy with Israel having the bomb.  Over the decades, Israel has consistently resorted to armed force in its relations with its neighbours.  And Israel certainly also has its share of radical voices.  For example, in 2013, Naftali Bennett, leader of the Jewish Home party said that Palestinian prisoners should be killed and not tried, and is quoted to have said, “I already killed lots of Arabs in my life, and there is absolutely no problem with that.”

As Obama has stated, the negotiations with Iran have thus far borne fruit. [2]  So let’s see these negotiations advance, the sanctions plaguing on the Iranian people loosened, and a movement toward a truly nuclear free Middle East.