CJPME Political Blog, May 19, 2015:  On Sunday May 2, a giant billboard calling to “End [the] Israeli Apartheid and Occupation of Palestine” welcomed commuters on Pat Bay highway traveling between Victoria and Sydney, BC. The billboard was erected on reserve land, home to the Tsawout First Nation. By Monday morning, the billboard contracting company began to receive calls, e-mails and even a letter from a BC MLA to take down the sign. The spokesman for the billboard contracting company announced to sponsoring groups that the Tsawout First Nation, after facing similar pressure, ordered the sign be taken down. 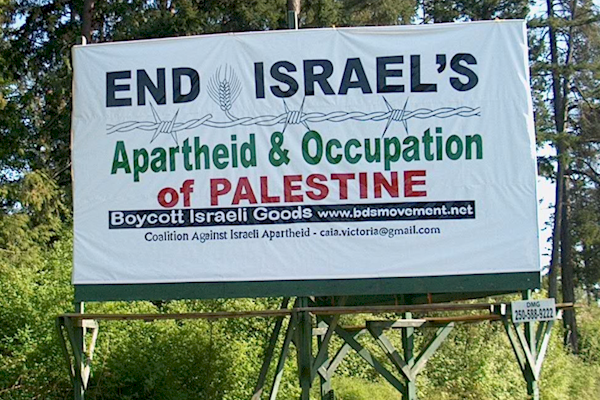 When the sponsoring groups decided to contact the Tsawout First Nation office directly and confirm if they had indeed given such order, they found out that the Tsawout office had never issued such a request. Certainly, there must have been a “miscommunication” of some kind, or perhaps, that is what some would like us to believe. Be that as it may, there is much to celebrate. The Tsawout office has confirmed it would honour the two-month contract and keep the billboard up, regardless of mounting pressure.

During the brouhaha the first week the billboard was up, Andrew Weaver, a BC MLA, wrote a formal letter to the spokesman for the billboard contracting company requesting that he consider taking down the sign. In this brief letter, Weaver refers to the billboard as “offensive,” for promoting “hatred of a people.”  And this is where a certain “irrationality” always seems to enter the discussion when the country of Israel is on the radar.

CJPME suggests that Mr. Weaver differentiate “hatred of a people” from legitimate criticism of a country’s policies, especially when the country in question behaves with complete disregard to international law. Calls for political and economic pressure against other regimes, such as Iran or Russia, have rarely led to concerns over rising Islamophobia or Anti-Slavic sentiment. The truth is that Israel’s own horrific acts are helping to create a growing international movement that not only advocates for the rights of Palestinians, but also scrutinizes Israel’s actions more than ever before.

Simply put, people like Mr. Weaver seem to want to conflate criticism of Israel with “hatred of a people” to prevent Israel from every being critically examined.  This is irrational, and it is not intellectually honest.

When referring to Palestinians living in Israel, Mr. Weaver also argued that “Israeli law does not distinguish between race, sex, or creed.” Mr. Weaver’s blithe statement leaves a bit to unpack: Is he referring to only Israel proper, or is he referring to the militarily occupied West Bank, where 600,000 Jewish Israeli colonists have been planted among 2.5 million non-citizen Palestinians.[i]  To give Mr. Weaver the benefit of the doubt, we’ll assume he’s talking about Israel proper.  Unfortunately, Palestinian citizens of Israel are marginalized second-class citizens, with “more than 50 Israeli laws [discriminating] against [them] in all areas of life, including their rights to political participation, access to land, education, state budget resources, and criminal procedures.”[ii] And this is the good news. Start talking about systemic Israeli discrimination against Palestinians in the West Bank, and it gets a lot uglier.

Mr. Weaver also disapproves over the use of the term “apartheid” to describe Israel, arguing it represents a “very serious allegation” and “accusation.” Indeed these are serious allegations – allegations that were leveraged only after close to 40 years of Israeli military occupation in the West Bank.  But lets look at the facts to determine if the term ‘apartheid’ fits Israel, or not?

“Apartheid”[iii]—literally, “apart-hood”—is a word with a very specific legal denotation, referring to the “inhuman acts committed for the purpose of establishing and maintaining domination by one racial group of persons over any other racial group of persons and systematically oppressing them,” as defined by the United Nations.[iv] Since illegally annexing East Jerusalem in 1967, for instance, Israel has implemented a series of planning and building policies that systematically discriminate against Palestinians[v], by either approving building permits on a racially-based manner, or by withholding building licenses for years, sometimes for over a decade, among other unjust tactics. After almost fifty years of occupation, fully one third of East Jerusalem has been confiscated for Jewish-only colonies.[vi] Without the necessary municipal building permits, Palestinians can only watch as Israeli colonies close in around them.

In another example, close to 80 percent out of nearly 300,000 Palestinians living in East Jerusalem live below the poverty line.[vii]  Yet while Palestinian neighborhoods in Israel rarely enjoy any socio-economic benefits—despite the fact that they are at the bottom of the socio-economic scale[viii]—Israel prioritizes development to already developed Jewish areas and constituencies. As a result, Palestinians in East Jerusalem are not only discriminated against in terms of housing opportunities, but are also denied the socio-economic benefits, services, and opportunities that would otherwise help them achieve upward mobility.

Such examples of Israeli discrimination towards Palestinian citizens are countless, so while Mr. Weaver claims it is a “very serious allegation” to use the term “apartheid” to describe Israel, it is a far larger crime to deny such term fits Israel in light of overwhelming evidence proving the contrary.

Israel’s declining image in the world stage is not the result of billboards. The ruthless Israeli occupation and oppression of Palestinians prompts condemnation of Israel, and billboards simply create awareness and encourage a much-needed discussion. Canadians should not be afraid to discuss and voice their opinion over such matters – whether for or against – as this strengthens the public discourse, and creates more informed citizens. Let’s stop throwing labels at one another, and let’s talk about what’s happening “on the ground,” day-to-day between Israelis and Palestinians, with an understanding of the historical context.  Then, perhaps, we’ll be able to talk rationally about human rights in Palestine-Israel.

[iii] Canadians for Justice and Peace in the Middle East (CJPME). “Apartheid in Israel.” Factsheet Series no. 21. February 2007. https://www.cjpme.org/DisplayDocument.aspx?DO=795&RecID=31&DocumentID=43&SaveMode=0

[v] Canadians for Justice and Peace in the Middle East (CJPME). “Apartheid in Israel.” Factsheet Series no. 21. February 2007. https://www.cjpme.org/DisplayDocument.aspx?DO=795&RecID=31&DocumentID=43&SaveMode=0

[viii] Canadians for Justice and Peace in the Middle East (CJPME). “Apartheid in Israel.” Factsheet Series no. 21. February 2007. https://www.cjpme.org/DisplayDocument.aspx?DO=795&RecID=31&DocumentID=43&SaveMode=0