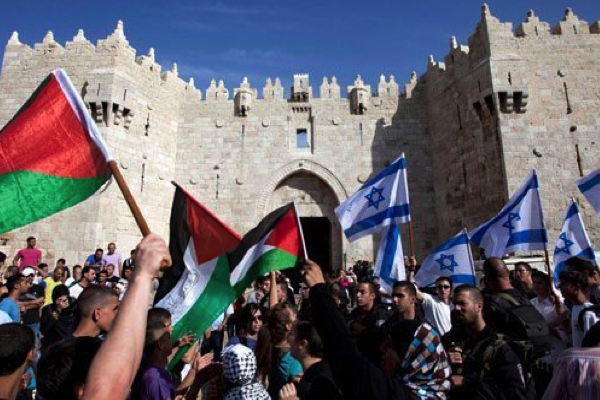 El-Ad argued something that most Canadian politicians have thus far been unwilling to accept: that you can like Israel, yet still criticize it.  More importantly, El-Ad clearly implicated the international community in the resolution of the Israeli-Palestinian conflict.  “The occupation isn’t an internal Israeli issue, but a major international issue. There’s no such thing as a democratic occupation. This can’t be an [Israeli] internal matter.”

Canadian politicians should learn from B’Tselem.  Unfortunately, the only position that many Canadian politicians are comfortable with is something like: “We support an end to the Israeli-Palestinian conflict through a negotiated two-state solution.”  Everyone’s comfortable with it: Trudeau’s Liberals, the Conservatives, the NDP and Canada’s Greens.  The problem is, it’s meaningless.

For the Canadian politicians who might’ve missed it, Israel withdrew from US-sponsored negotiations on April 24, 2014 – two and a half years ago.  And if that wasn’t convincing enough, Israel’s current PM Benjamin Netanyahu won re-election in 2015 based on the promise to never allow a Palestinian state in the West Bank.

The logic is pretty simple: no negotiations – no negotiated solution.

The fact that every party across the Canadian political spectrum proclaims the same position was probably a tip-off that a commitment to a “negotiated solution” means little.  Sure, everyone wants peace – who doesn’t?  In parliamentary discussions earlier this year, it was amazing how many times words like “dialog” and “peace process” were bandied about.  But repeating platitudes which are detached from the day-to-day reality makes one naïve at best, and complicit at worst.

It’s a bit like commenting on a married couple who have severe marital problems, complete with shouting matches and physical abuse.  While all their friends may agree that the marriage is in trouble and that the couple should get counselling, no true friend would allow the husband to repeatedly beat his wife as they wait for counselling.  But Canadian political leaders seem perfectly willing to allow the “beating” to continue as they await the ever elusive negotiated solution (“counselling”) between Israel and Palestine.

Brazilian philosopher Paolo Friere argued that, “Washing one's hands of the conflict between the powerful and the powerless means to side with the powerful, not to be neutral.”  Yet that is exactly what Canadian politicians do with each passing year as they smugly declare their devotion to the long-awaited “negotiated solution.”

How to stop the beating?  Regardless of which side in the conflict they may favour, Canadian politicians could follow the simple example of B’Tselem from last week at the UN: hold human rights violators to account.

First, like B’Tselem, Canadian politicians must condemn Israeli settlement building: as frequently and forcefully as possible.  A form of colonization, settlements violate international law, and – according to chief Israeli negotiator Tzipi Livni – were the chief reason that negotiations failed in 2014.

Beyond settlements, Canadian politicians should also be ready to condemn the other insidious on-the-ground realities of the conflict.  In recent months, Palestinian knife attacks on Israelis have been regularly reported in Canadian media, but only rarely do we hear of the hundreds of Palestinian political prisoners in Israeli jails, the Israeli demolition of Palestinian homes, or the onerous Israeli military restrictions on Palestinian movement around the West Bank and Gaza.

Finally, Canadian politicians and parties should be prompt to call for a ceasefire the moment violence erupts between Israelis and Palestinians.  Not only is armed violence between states in violation of core precepts of the UN Charter, but the disproportionate victims of such aggression are inevitably civilians.  Beyond all logic, the Harper government repeatedly opposed international calls for ceasefires, as if the conflict could be assuaged by allowing either side to pursue its goals militarily.

While these suggestions for Canadian politicians barely scratch the surface, they start to respond to B’Tselem’s assertion that the conflict is more than just an internal Israeli issue.  The whole world desires peace between Israelis and Palestinians, but only active engagement – not wishful thinking – will facilitate a solution.  In the meantime, Canadian politicians should do everything they can to stop the beating.