CJPME Political Blog, Nov. 17, 2016: Until I looked more closely at Governor General David Johnston’s recent trip to the Middle East, I was totally oblivious to the fact that Canada funds programs to help Palestinian women. Long concerned about the plight of women in the Middle East, I was thrilled to learn that Canada funds a CARE International program to increase Palestinian women’s access to the labour force. 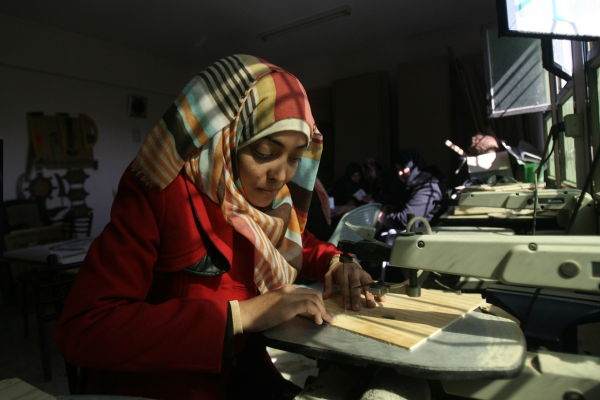 Admittedly, I wasn’t fully aware of the plight Palestinian women workers until recently, as this topic doesn’t get much attention in academia or Western mainstream media.  What I learned was sobering.

Palestine’s patriarchal society plays a major role in the subordination and exploitation of Palestinian women. Sexism, sexual and physical abuse, and dehumanization are realities that many of them must confront daily.  After these challenges, it is no wonder that Palestinian women also struggle to participate in the labour force. As I delved deeper into the situation, however, it became obvious that any benefits from Canada’s aid – however well-intentioned – are totally eclipsed by the overwhelming negative impact of Israel’s military occupation of the Palestinian territories.

Over the past several decades, Palestinian women’s participation in the labour force has been concentrated in two sectors: agriculture and services. Unfortunately, these sectors are very much negatively affected by Israel’s occupation. For instance, Israel’s widespread destruction of agricultural and manufacturing sites and infrastructure in the OPT diminishes available employment opportunities for women in Palestine who tend to gravitate towards this work.

A study on the female labour force in the Occupied Palestinian Territories (OPT) published in 2014 by Samia al-Botmeh, a Palestinian economics professor and researcher at the Centre for Development Studies at Birzeit Univeristy in Palestine, highlighted how despite Palestinian women maintaining higher school enrolment rates and lower drop out rates than their males counterparts in the Middle East, they nonetheless suffered greater unemployment rates than men in the region.

Whatever the need, it’s encouraging to know that Canada is funding programs that seek to benefit women in the Middle East. The Canadian Governor General visited local women entrepreneurs in the West Bank and Jordan who have benefited from the Canadian-funded development programs of CARE International during his weeklong trip to the Middle East earlier this month. It was reassuring to know that the Canadian government had prioritized this need in its aid.

But honestly, the prognosis for this Canadian aid for Palestinian women is not good.

Thus, while Canadian aid to women is well meaning, it is greatly overshadowed by Canada’s investment in Operation Proteus, a program which ultimately deepens the militarization of the region.

To further emphasize the impact of Israel’s military occupation, the United Nation’s Conference on Trade and Development recently published a report asserting that Palestine’s economy would double if Israel’s occupation were lifted.  And if Canada believes in the “two-state solution” and an end to Israel’s occupation, why wouldn’t it welcome Palestine’s baby steps toward statehood at the UN, e.g. membership in the ICC or UNESCO.

In parallel to funding programs that help Palestinian women, Canada must address the political context these women are navigating.  As Palestinian women elevate their status and experiences in the workforce, an occupation-free Palestinian society will offer broader opportunities to this disadvantaged demographic.

While any aid to Palestinian women can only help, Canada should not be too quick to pat itself on the back. For such programs are a bit like giving a Band-Aid to an amputee.  Canada must also address Israel’s military occupation of Palestinian society, and work to bring its devastating impacts to an end. After all, the complete liberation of Palestinian women is only possible in a free and independent Palestine.