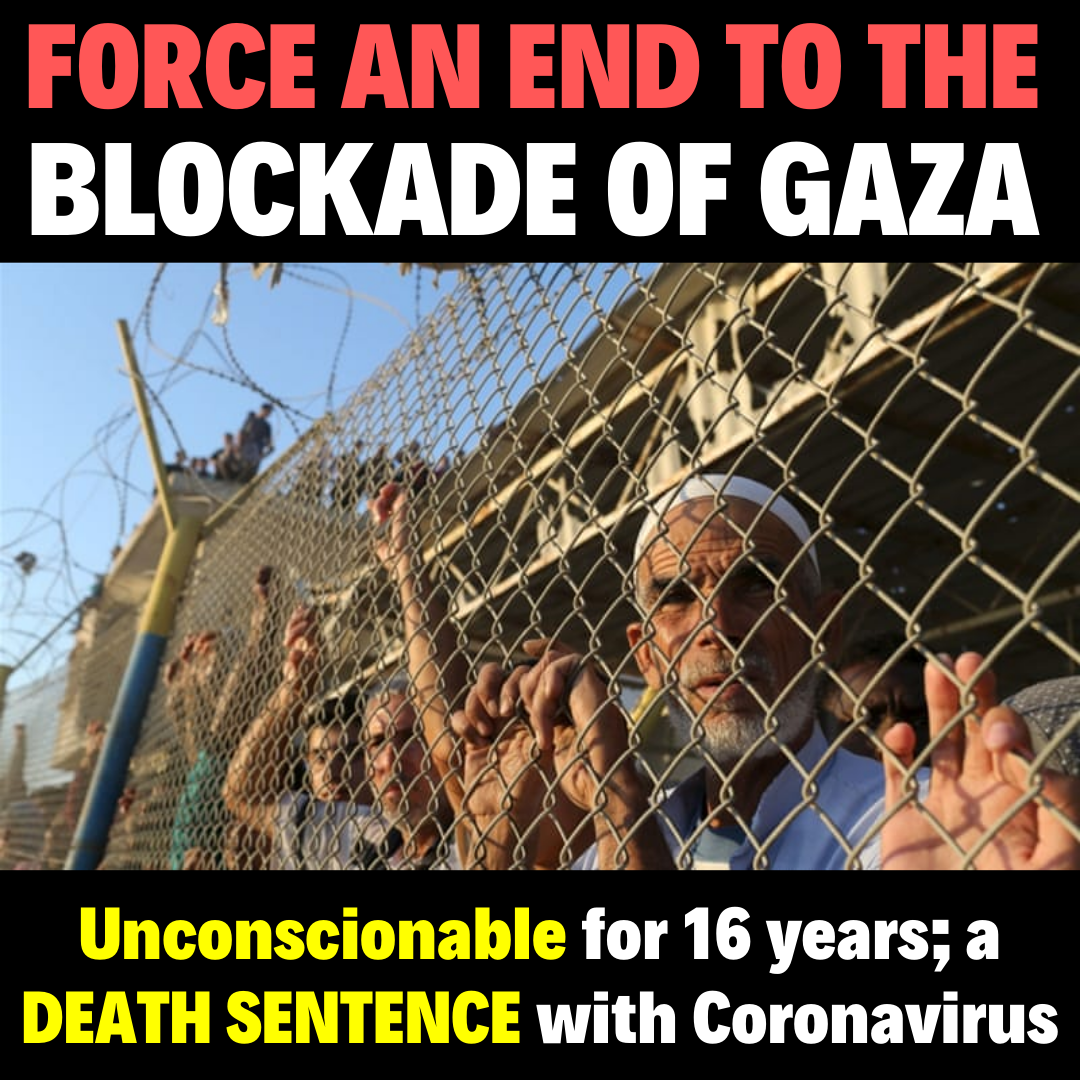 As the West struggles with the Coronavirus, other parts of the world fear a catastrophe! Under blockade since 2006, Gaza now has 12 confirmed cases of Coronavirus, but only 40 intensive care beds for a population of two million! (By comparison, Germany has 600 beds for every 2 million.) The health care system in Gaza was already desperate: two years ago, the UN already considered of Gaza’s health care system to be “at breaking point.”

Even in good times, Israel’s blockade of Gaza is unconscionable. With the Coronavirus, it could be a death sentence!

TELL TRUDEAU YOUR LOCAL MP AND OTHER POLITICAL LEADERS IN CANADA : ISRAEL MUST END ITS INHUMANE BLOCKADE OF GAZA !

Earlier this week, Gaza’s health ministry said there were 12 confirmed cases of Coronavirus in Gaza – all currently in quarantine.

Unfortunately, Israel’s thirteen-year blockade of Gaza has decimated Gaza’s healthcare infrastructure. Gaza faces a shortage of healthcare workers because of its hobbled economy and Israel’s restrictions on movement for health care workers. Israel also imposes broad restrictions on medical imports because of their “potential” military purposes, including those necessary for health care like nuclear scanning technology or materials used in prostheses. With inconsistent access to medical supplies and inadequate staffing, many Gaza patients must seek healthcare elsewhere, but must get a permit from Israel to do so. In 2018, 40 percent of such permit applications were denied.

With healthcare infrastructure that is thoroughly unprepared and ill-equipped to deal with a pandemic, and restrictions preventing treatment elsewhere, an outbreak of the coronavirus would be disastrous for Palestinians in Gaza.

While Canada does not have a “direct” role in imposing the international blockade of Gaza, it refuses to condemn it. Amnesty International and other international human rights organizations have asserted that the Israel’s blockade is “collective punishment” – punishment of a civilian population because of the alleged crimes of a small number of individuals. The Canadian government under Harper and Trudeau has cultivated a friendly relationship with Israel. Trudeau is well-positioned to join other world leaders on insisting on a humanitarian end to the blockade.