As you may already know, Israel has intercepted the Gaza Freedom Flotilla III, captured one of the vessels that was part of the convoy, the Marianne, and detained its international crew. This confiscation happened while the boat was only 100 nautical miles from the shores of Gaza, in international waters. Meanwhile, the other three vessels that were part of the convoy decided to turn back to Greece. At least two of the individuals detained by Israel are Canadians. The flotilla left Europe weeks ago to deliver humanitarian supplies to Gaza. Please join our campaign to have Canadian politicians pressure Israel to immediately release the Marianne, its crew and its volunteers.

Please click here to send an email to your MP and the leaders of Canada’s main political parties. 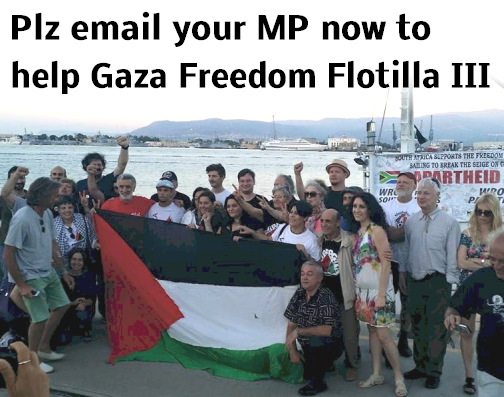 The Gaza Freedom Flotilla III (FF3) is an international effort to break the illegal blockade of Gaza.  The Canadian participation in the FF3 is overseen by the pan-Canadian “Gaza’s Ark” group, which has been involved in related initiatives since 2010.

There are four Canadians on the FF3:

The participants and boats in the FF3 initiative were unarmed, and intended to break the blockade non-violently.  The FF3 was not planning to enter Israeli coastal waters while approaching Gaza, instead approaching directly through Gazan territorial waters.  The FF3 was bringing much needed building supplies to Gaza, and was planning to carry out exports of Palestinian commerce in Gaza – as much as $24,000 worth.  As such, Israel’s brutal and destructive approach to the flotilla and its crew was entirely unwarranted.

The blockade of Gaza is considered illegal because 1) it is a belligerent action by Israel imposed without a UN mandate, and 2) it constitutes a form of “collective punishment,” as Gaza’s civilian population suffers enormously under the blockade’s restrictions.  Israel justifies its blockade arguing that they are preventing movement of arms to Hamas.  Were this truly the intent, such monitoring could be performed without economically isolating the entire territory of 1.5 million people. During times of conflict, Israel often promises to loosen the blockade, but ultimately does very little once international attention moves away from the conflict.  Please read CJPME’s factsheet on Israel’s illegal blockade of Gaza for more information.