CJPME Factsheet 174, published July, 2013: This factsheet examines the importance of fishing to the economy and well-being of Gaza.  After a brief overview of the history of fishing in Gaza, this factsheet looks at the wide-reaching impact of Israel’s blockade on the fishing and people of Gaza.

Factsheet Series No. 174, created: July 2013, Canadians for Justice and Peace in the Middle East
View factsheet in PDF format 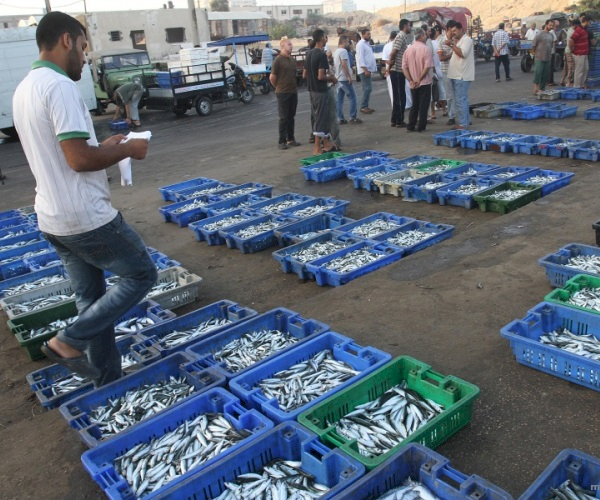 How has Palestine’s fishing industry evolved over the last century?

Fishing has always been a significant component of the Palestinian economy. Shoals of sardines and tuna, as well as shrimp and squid are plentiful in the Eastern Mediterranean, and have provided Palestine’s fishermen with livelihoods for centuries. The Mediterranean Sea provided around 80 percent of Palestine’s total fish catch prior to the 1948 Nakba.[i] In 1944, which seems to have been a peak year, fishermen along the Mediterranean coast caught 2,814 metric tons of fish. While this catch helped supply population centers in Palestine’s interior with an essential protein source, 5,000 metric tons of fish were also imported yearly during this time.[ii] The fishing industry was regulated by the Ottoman Civil Code of 1870, which remained largely unchanged during British rule.[iii] In 1948, armed Jewish militias forced large numbers of Palestinians from fishing communities along the Mediterranean coast of Palestine to flee to the Gaza Strip for safety. It is estimated that today, around 80 percent of Gaza’s fishermen are descendents of refugees from other southern Palestinian coastal fishing villages.[iv]

How has Israel’s blockade of Gaza affected the fishing industry’s productivity?

Israeli restrictions on Palestinian fishermen’s right to fish: Since Israel captured the Gaza Strip in 1967, the maritime area where the Israeli navy allows Palestinians to fish has been reduced numerous times (see diagram at right of the fishing zones permitted under various Israeli-Palestinian peace agreements. Each time the potential fish catch has shrunk correspondingly (see graph below).

On May 21, 2013, the Israeli military signaled their intent to extend the fishing range to the six nautical miles that were permitted up until 2006.[v] The consequences of this decision have not yet been reported, but productivity is unlikely to rise since most schools of large fish are more than 8 nautical miles offshore.[vi]

Israeli restrictions on Gaza fishermen’s access to fishing equipment and boat fuel: Since Israel began its economic blockade of Gaza in 2007, imports of fishing nets, spare engine parts and other materials necessary for maintaining the fishing fleet have been drastically restricted.[vii] Putting further strain on the situation, petrol and diesel have become increasingly expensive and hard to find. Many Palestinian fishermen now find that it costs more to take their boats out than to leave them beached on Gaza’s 45 km coast. Others, desperate to make it out to sea, have turned to cooking fuel as an alternative motor fuel, despite the engine damage this causes. [viii]

Pollution of shore waters due to sewage system damage: In addition, Israeli aerial bombardments have caused massive damage to Gaza’s sewage treatment facilities. This damage cannot currently be repaired, due to Israel’s restriction on the entry of the materials needed to repair the facilities. Therefore, 50 to 80 million liters of untreated or partially treated sewage are released daily into the Mediterranean on or near the shore. This is especially detrimental due to the three nautical mile limit imposed on fishermen since 2009, since the area closest to the shore is both the most polluted and the most overfished. In some cases, pollution makes fish caught unsuitable for human consumption.[ix]

Israeli Navy violence against fishermen: It’s not only raw sewage that caused the annual catch to decrease by 47 percent between 2008 and 2009.[x] Fishermen are attacked with live fire when they cross the unmarked nautical boundaries arbitrarily imposed by Israel.[xi] According to B’Tselem, four fishermen have been killed since 2000 (two since January of 2009) while fishing.[xii] [xiii] The violence against Gaza’s fishermen forces them to choose between their personal safety and earning a living. 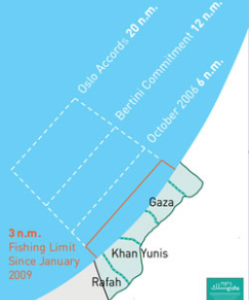 How has this productivity drop affected Gazans’ economy and standard of living?

Gazan families have always relied on fishing to provide employment, revenue and food. With the industry now crippled for so many years, the number of fishermen has shrunk from 10,000 in 2000 to 3,500-4,000 in 2010.[xiv] Despite the lower numbers of people fishing, the individuals doing so are not now earning more. According to a 2010 ICRC report, 90 percent of Gazan fishermen live in poverty, 40 percent more than in 2008.[xv] A total of over 45,000 people used to work in fishing and associated industries like repairs and retail.[xvi] With 39 percent unemployment as of 2010,[xvii] finding another job is often impossible, especially for older fishermen, many of whom lack formal education. Typically, fishermen invest the majority of their savings in their boats, leaving little for investment in new businesses.[xviii]

As the opportunity to be economically self-sufficient remains beached alongside idle boats, food insecurity and dependence on the UN for food rations increase. Gazans are now obliged to import fish from Israel at much higher prices than locally-caught fish typically cost.[xix] With this valuable source of protein and essential vitamins out of reach for many, UN food rations are the only remaining option.[xx]

What changes and investments do fishermen need to revive the industry?

Israel must end its illegal blockade of Gaza: it is impossible for the industry to be profitable and sustainable without the economic and political stability that the blockade prevents. More specifically, allowing imports of crucial engine parts and fishing equipment as well as adequate quantities of boat fuel would give an immediate boost to the industry. Fishermen need risk-free access to fishing grounds up to 20 nautical miles offshore, as established in the 1995 Oslo Accords.[xxi] They also need to be able to sell their fish to their fellow Palestinians in the occupied West Bank, and to international markets. (Israel currently prevents Gaza fishermen from selling their fish outside Gaza.) These changes would allow Gazans to modernize their fishing industry. In 2005, the Palestinian Authority allocated $30 million for the development of the existing fishermen’s harbour, fishermen training and capacity building.[xxii] Such projects have been rendered unviable by the blockade, and the instability and violence that it generates, but could be renewed with increased international funding. Sewage treatment facilities must be repaired and upgraded, and fish processing plants built. Finally, fishermen need democratisation of the fish marketing process.[xxiii] These measures would allow Gaza’s fishing industry to again provide substantial employment, income and food for Gazan families, improving their overall standard of living.

What can Canada do to enable Palestinian fishermen to restore their industry’s productivity?

Canadians and their government can pressIsrael to end its blockade ofGaza and its violence against Gazan fishermen.Canada can also provide financial aid to facilitate the modernization of the Gazan fishing industry, in addition to financing for Canadian fishermen and fish plant workers to share knowledge and skills with their Palestinian peers.

[ix] “Farming without Land, Fishing without Water: Gaza Agriculture Sector Struggles to Survive.” Office for the Coordination of Humanitarian Affairs (OCHA). 25 May 2010.

[xv]“Gaza closure: not another year!” International Committee of the Red Cross (ICRC), 14 June 2010.

[xix] “Gaza Fishing: An Industry in Danger” Office for the Coordination of Humanitarian Affairs (OCHA). April 2007.

[xx] Sixty-one percent of Gazans depend on rations from humanitarian organizations for basic food items. (“Farming without Land, Fishing without Water: Gaza Agriculture Sector Struggles to Survive.”) Office for the Coordination of Humanitarian Affairs (OCHA). 25 May 2010.

[xxi] These recommendations are based on Oxfam’s 2010 report, Dashed Hopes: Continuation of the Gaza Blockade.

[xxiii] In the past, one auctioneer has dominated the marketing of almost all of Gaza’s fish catch. (“Gaza Strip Fisheries: Under Siege” International Collective in Support of Fishworkers, December 2000.)