CJPME Factsheet No. 218, published February, 2020: This factsheet provides an overview of the Trump Plan for the Israeli-Palestinian conflict and explains why this new deal is an obstacle to sustainable peace for Palestinans and in the Middle-East.

The Trump Plan for the Israeli-Palestinian Conflict

Factsheet Series No. 218, created: February 2020, Canadians for Justice and Peace in the Middle East
View factsheet in PDF format 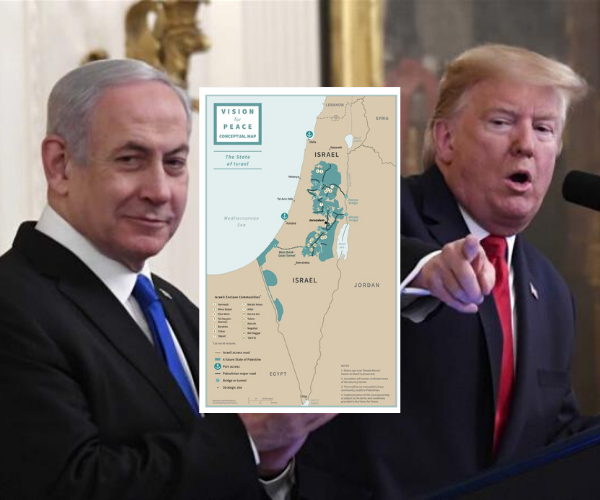 How was the Trump Plan developed?

On January 28, 2020, President Donald Trump unveiled a set of political and economic proposals to address the Israeli-Palestinian conflict. It took 3 years for his son-in-law, Jared Kushner, High Advisor to the President and responsible for defining its Middle East policy, to build this plan "for peace"[1]. The latter was drafted without the participation of Palestinian negotiators.

Kushner has no experience in diplomacy and his neutrality as a mediator was questioned because of conflicts of interest. He and his family have close ties with the organization Friends of the Israeli Defense Forces (FIDF) (an association that collects donations for the Israeli army)[2] and American Friends of Beit El (an illegal Israeli “settlement” known for its radical opposition negotiations between Israel and Palestine)[3].

This plan for the Middle East was also drawn up within the framework of a strongly pro-Israel American foreign policy[4]: e.g. Trump’s termination of funding to the UN aid agency for Palestinian refugees (UNRWA); Trump’s assertion that Israeli settlements do not violate international law; Trump’s relocation of the American embassy to Jerusalem; Trump’s closure of the offices of the Palestine Liberation Organization in Washington, etc.

The economic aspect of the Trump plan was presented on June 25 and 26, 2019 in Manama (Bahrain) by Kushner, without any Israelis or Palestinians present. The political component was unveiled at a press conference in late January 2020 in the presence of Israeli Prime Minister Netanyahu, barely five weeks before the Israeli elections in early March 2020. Some believe this was intentionally designed to mobilize the nationalist faction of the Israeli electorate[5]. The presentation of the plan also coincided with Trump’s impeachment trial. While the plan has no legal value under international law, it nevertheless carries heavy political weight. For W.F. Wechsler, director of Middle East programs at the American think-tank Atlantic Council, the plan "has less to do with a good faith effort to achieve peace between Israelis and Palestinians, and more to do with legal and electoral issues facing the two leaders."[6]

What are the main points of the Plan?

The Trump Plan proposes a two-state solution to the Israeli-Palestinian conflict, based on the mutual recognition of "Israel as a nation state of the Jewish people", and of Palestine "as a nation state of the Palestinian people".[7] On the one hand, it allows de facto Israeli control over parts of the West Bank and over East Jerusalem. The plan also gives Israel exclusive rights to Jerusalem[8] and allows the illegal and unfair annexation of Jewish-only Israeli settlements in the West Bank[9] (in exchange for arid and isolated territories in the Negev desert). On the other hand, the plan advocates for the creation of a Palestinian state, under a number of conditions[10] and with limited sovereignty. The suggested new Palestinian capital would be called "Al-Quds" ("Jerusalem" in Arabic) but would be established near the present-day city of Abu Dis, a metropolitan suburb of Jerusalem[11].

To some degree, some of the proposed measures are in line with previous peace plans[12] although the Trump Plan for a two-state solution very much disproportionately empowers Israel. The Plan was inspired by Clinton parameters for the annexation of the settlements and the suggested territorial exchanges. It also bears similarities to the Allon Plan, a plan developed independently by Israel in 1967, notably for the annexation of Jerusalem and the Jordan Valley[13].

Finally, the last part of the plan addresses economic proposals and calls for an international investment of $50 billion to enable the development of Palestine[14].

The agreement provides for a period of four years for the Palestinian and Israeli representatives to negotiate on the basis of the American proposals. Meanwhile, Israel is supposed to refrain from building new settlements in the West Bank.[15]

How is the Plan at odds with the American diplomatic tradition?

If the Trump plan has certain common themes with past proposals, there are many new demands and concessions requested of the Palestinian Authority (PA) which follow the political vision of Netanyahu and the Israeli right[16].

First, the Trump Plan officially rejects any Palestinian claim of sovereignty over East Jerusalem. In addition, for the first time, an American president has recognized Israeli sovereignty over Israel’s West Bank settlements, in complete disregard for international law.

Furthermore, on the question of Palestinian refugees, the plan differs from those which preceded it: no return of Palestinian refugees into to Israel is permitted, and return of refugees to the West Bank and Gaza only under certain conditions[17]. The plan thus violates the right of return established in UN Resolution 194 (1948). At the same line, the plan proposes that after a 4-year negotiations phase, UNRWA will disappear and Palestinian refugees will lose their status as refugees[18]. (Note that this last proposal seems literally impossible, given that refugee status is determined by UN definitions, not by an American president.)

Can the Trump Plan facilitate peace?

No. First, the mere fact that the plan was drawn up without the participation of Palestinian negotiators undermines any legitimacy the Plan might otherwise have enjoyed. Indeed, since December 2017, there has been no formal contact between the White House and the Palestinian leadership. This deterioration in relations is essentially the result of the Trump administration's decisions to undermine the power of Palestinian leaders, notably by closing the offices of the Palestine Liberation Organization (PLO) in Washington (which served as a de facto embassy), and removing financial support for the Palestinian Authority (established under the Oslo Accords).

The status given to Jerusalem proposed by the Plan also constitutes a fundamental point of disagreement. On February 1, 2020, Mahmoud Abbas announced "I do not want to be remembered as the one who sold Jerusalem."  Afterwards, Abbas went on to cancel all security cooperation between the Palestinian Authority and Israel and the United States[19]. While many Palestinians have long criticized this security cooperation between the Palestinian Authority and Israel, the cooperation nevertheless enabled the two sides to impose a type of calm in the face of grassroots Palestinian resistance.

The Trump plan also proposes measures that make any long-term sustainable peace difficult. The suggested territorial exchanges diverge considerably from the borders drawn in 1967 and recognized by the UN[20]. The new borders would define a non-contiguous Palestinian state interspersed with Israeli Jewish-only settlements. The plan also deprives the eventual Palestinian state of the Jordan Valley[21], a region that is crucial for agriculture[22] as well as for Palestinian territorial integrity and coherence. Without this valley, the future Palestinian state would then be entirely landlocked by Israel.

Furthermore, the potential Palestinian state is subjected to numerous conditions which fundamentally undermine its future sovereignty. For example, according to the plan, the Palestinian state must be demilitarized and must abandon the control of its borders and airspace.  The Palestinian state will also be denied the ability to have an independent foreign policy. It would also be prevented from joining an international organization without the consent of the State of Israel[23] and would not be allowed to take any action against the State of Israel or the United States before the International Criminal Court, the International Court of Justice and any other international tribunal[24]. By defining a future Palestinian “state” with extremely limited sovereignty and dependent on the whim of Israeli authorities, Trump's plan offers a totally inviable settlement.

Aside from these structural flaws, the Trump Plan has other troubling aspects. Hidden in the fine print, Trump’s Plan would strip citizenship from 350 000 Palestinians who live in the Arab Triangle[25]. That is, the inhabitants of ten Arab villages on the Israeli side of the 1967 border could be zoned into the future Palestinian state against their will[26] and in total violation of international law[27]. The plan also changes the status quo and access rights to the highly sensitive Al Aqsa Mosque/Temple Mount[28]. This decision, which may appear insignificant, could have major political consequences[29]. For instance, in recent years, restrictions on access, or the Israeli plan to install cameras around the Mosque had already created strong tensions between Muslims and Israeli authorities[30].

What was the reaction of the Palestinians?

Immediately after the plan’s release, the Palestinian Authority concluded that "the plan is an American and Israeli disavowal of the Oslo Accords”.[31]

Hamas head Ismail Haniyeh announced, for his part, that the American plan "will not pass" and could even lead the Palestinians to a “new phase in their struggle” against Israel[32]. On February 11, 2020, before the Security Council, Mahmoud Abbas officially rejected the Israeli-American plan[33].

What reactions has the plan generated internationally?

International reactions to the plan have also been very negative, despite the fact that many countries depend on U.S. aid, trade and influence and are not in a position to challenge the Trump administration directly.

The plan was criticized by the Arab League on February 1, 2020[35], by the Organization of Islamic Cooperation on February 3[36] and also by several Arab countries such as Algeria, Tunisia, Jordan, Kuwait, and by Iran.

The United Nations has also reaffirmed its commitment to a two-state solution based on the pre-existing 1967 borders. UN Secretary-General António Guterres said that the only plan he could accept was one that complied with United Nations resolutions and international standards[37].

On February 4, Josep Borrell, High Representative of the European Union for Foreign Affairs declared that "the US initiative, as presented on January 28, deviates from internationally agreed parameters" and that "in accordance with international law and relevant United Nations Security Council resolutions, the EU has not recognized Israel's sovereignty over the occupied territories [sic] since 1967. Measures for annexation, if implemented, could not pass unchallenged ”.[38]

[1] Other political figures also participated in the development of this plan: Ambassador David Friedman, Jason Greenblatt and Avi Berkowitz.

[10] During the conduct of negotiations: p.39, on Gaza: p. 26, on the governance of the future Palestinian state: p. 34, on the fight against terrorism: Appendix 2B, on demilitarization: Appendix 2C.

[27] The Universal Declaration of Human Rights forbids a country from arbitrarily stripping individuals of their nationality.

[28] Since 1967, the status quo only allowed Muslims to pray on the Esplanade.