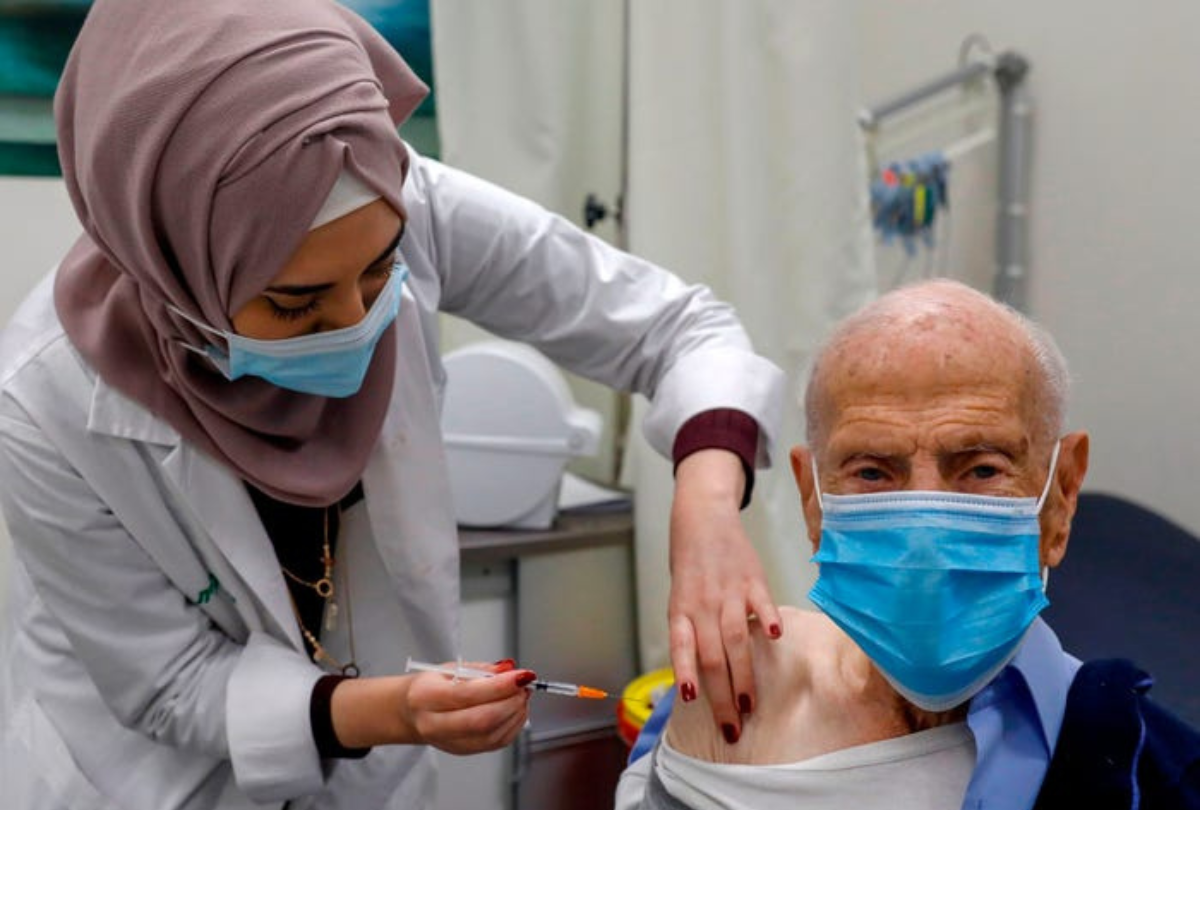 CJPME Factsheet No. 224, published June, 2021: This factsheet provides an analysis of the vaccination campaign against Covid-19 in Palestine and Israel's legal responsibility to protect Palestinians from the disease.

Is Israel refusing to vaccinate Palestinians?

Yes, but not all of them. Israel has excluded about five million Palestinians in the occupied West Bank and Gaza from its COVID-19 vaccination program. Palestinian citizens of Israel, as well as Palestinians in occupied East Jerusalem, however, do have access. In addition, Israel has offered to vaccinate Palestinians from the West Bank who work in Israel or the illegal settlements, and who therefore may come into close contact with Israelis.

In June 2021, Israel announced a deal to lend about 1 million nearly expired vaccines to the Palestinian Authority, in exchange for taking a future shipment of fresh vaccines that had already been procured by the PA. Despite suggestions from some that this was a donation or an act of benevolence by Israel, the deal would not have improved overall vaccine access, and served Israel’s own self-interest. Palestinians regarded it as cynical move that failed to address their core healthcare needs. [1]

Is it discriminatory for Israel to exclude Palestinians under occupation?

Yes. Israel’s refusal to vaccinate Palestinians under occupation is a clear act of Apartheid. Nowhere is this more evident than in the West Bank, where Israeli settlers can access Israeli vaccines, but Palestinians living in the same territory cannot. As Human Rights Watch has noted, in the West Bank, “people on one side of the street are receiving vaccines, while those on the other do not, based on whether they’re Jewish or Palestinian.”[2]

The inclusion of Israeli settlers in Israel’s vaccination program proves that there are no logistical constraints that would prevent Israel from getting vaccines in the hands of Palestinians – instead, officials have deliberately made the choice to leave them “unprotected.”[3]

Both populations are under the control of the Israeli government, and yet their health systems are segregated and unequal. This unequal access to health care based on ethnic discrimination is what Amnesty International referred to as “institutional discrimination,”[4] and which many are referring to as ‘medical apartheid’.[5]

Who is responsible for vaccinating Palestinians?

Israel claims that, under the Oslo Accords, it is not responsible for vaccinating Palestinians in the occupied territories. This is not true. While the Oslo Accords (signed in 1993) gave the Palestinian Authority some limited autonomy to manage health care, international law is clear that an occupying power is ultimately responsible for the public health of those being occupied. Article 56 of the Fourth Geneva Convention states that an occupying power has a legal responsibility to maintain “the medical and hospital establishments and services, public health and hygiene in the occupied territory, with particular reference to the adoption and application of the prophylactic and preventive measures necessary to combat the spread of contagious diseases and epidemics.”[6] The Fourth Geneva Convention takes precedence over all other laws and agreements, including the Oslo Accords.

UN experts and human rights groups have insisted that “the Oslo Accords do not exempt Israel from its duties as an occupying power.”[7] Over 31 human rights and health care organizations, many of them Israeli, have signed an open letter to the Israeli government demanding that they fulfill their legal obligations under international law and provide vaccines to Palestinians in the occupied territories.[8] This position has also been echoed by international human rights groups, including Amnesty International and Human Rights Watch. In March 2021, six Israeli and Palestinian human rights organizations tried to petition the Israeli High Court of Justice to ensure Israel provide a regular supply of vaccines to the Palestinians, emphasizing Israel’s “legal, moral and ethical obligations” as an occupying power.[9]

How has the West Bank and Gaza fared with the Covid-19 pandemic?

The occupied West Bank and Gaza were hit hard by the COVID-19 pandemic and have been in a State of Emergency since March 2020. Prior to the pandemic, Palestinian authorities were already facing serious barriers to meeting the population’s health and security needs, in part due to the restrictions of the Israeli occupation (see below). Medical journal The Lancet reported that the capacity of health authorities in both the West Bank and Gaza “to contain the spread of COVID-19 is limited by ongoing and pre-existing shortages in health-care equipment, including medications and disposable equipment.”[10]

In the West Bank, the PA was able to stave of serious infection rates in the first few months of the pandemic thanks to tight restrictions and strict quarantine measures. In Gaza, the blockade and lack of mobility initially contributed to low case counts for COVID-19. The easing of restrictions in 2021 led to a rise in cases,[11] which was severely exacerbated by the escalation of Israeli violence against the population of Gaza in May. During the latter, Israeli violence killed 278 Palestinians, wounded 9,000 injured, made 77,000 internally displaced, and damaged 30 health facilities.[12] Israeli airstrikes also damaged Gaza’s only COVID-19 testing lab,[13]  and killed top doctors who were overseeing Gaza’s pandemic response.[14]

Can’t Palestinians just get their own vaccines?

Palestinian health authorities face significant barriers which restrict their ability to procure and distribute vaccines, due to oppressive Israeli regulations and initiatives. It is important to keep in mind that the Palestinian authorities in the West Bank and Gaza do not have the same rights as a state would. Israel has complete control over all borders and must give its official approval whenever the PA wants to import vaccines from abroad. In February 2021, the Israeli Knesset debated a proposal to ban any vaccines from reaching Gaza without first extracting political concessions from Hamas.[15]

Gaza has been subject to an Israeli land, air, and sea blockade since 2007,[16] which limits the movement of Palestinians living in Gaza and undermines access to essentials such as water, food, and healthcare. B’Tselem reports that “Gaza’s healthcare system has been in a state of collapse for years” due to such policies; [17] prior to the pandemic, Palestinian health authorities in Gaza could not “meet the population’s needs due to a shortage of medicine, equipment, doctors and professional training.”[18]

In addition to deteriorating infrastructure, the Palestinian Authority says that “it does not have sufficient funds and capabilities to purchase the necessary vaccinations.”[19] According to Reuters, “Palestinians’ COVID-19 vaccination plan faces a $30 million funding shortfall,” even when factoring in international donations through the COVAX program, which was expected to provide up to 25% of Palestine’s vaccines.[20] The COVAX program itself, however, is on the verge of collapse due to lack of funds.[21]

[6] United Nations, “Geneva Convention Relative to The Protection of Civilian Persons in Time of War Of 12 August 1949,” August 1949.

[7] Medical Aid for Palestine, “Equal Access to Covid-19 Vaccines: Who Is Responsible in The Occupied Palestinian Territory?” February 2021.

[17] B'Tselem, “Since pandemic, has Israel allowed almost no Palestinians out of Gaza for medical treatment,” accessed June 21, 2021.