The Assassination of Shireen Abu Akleh 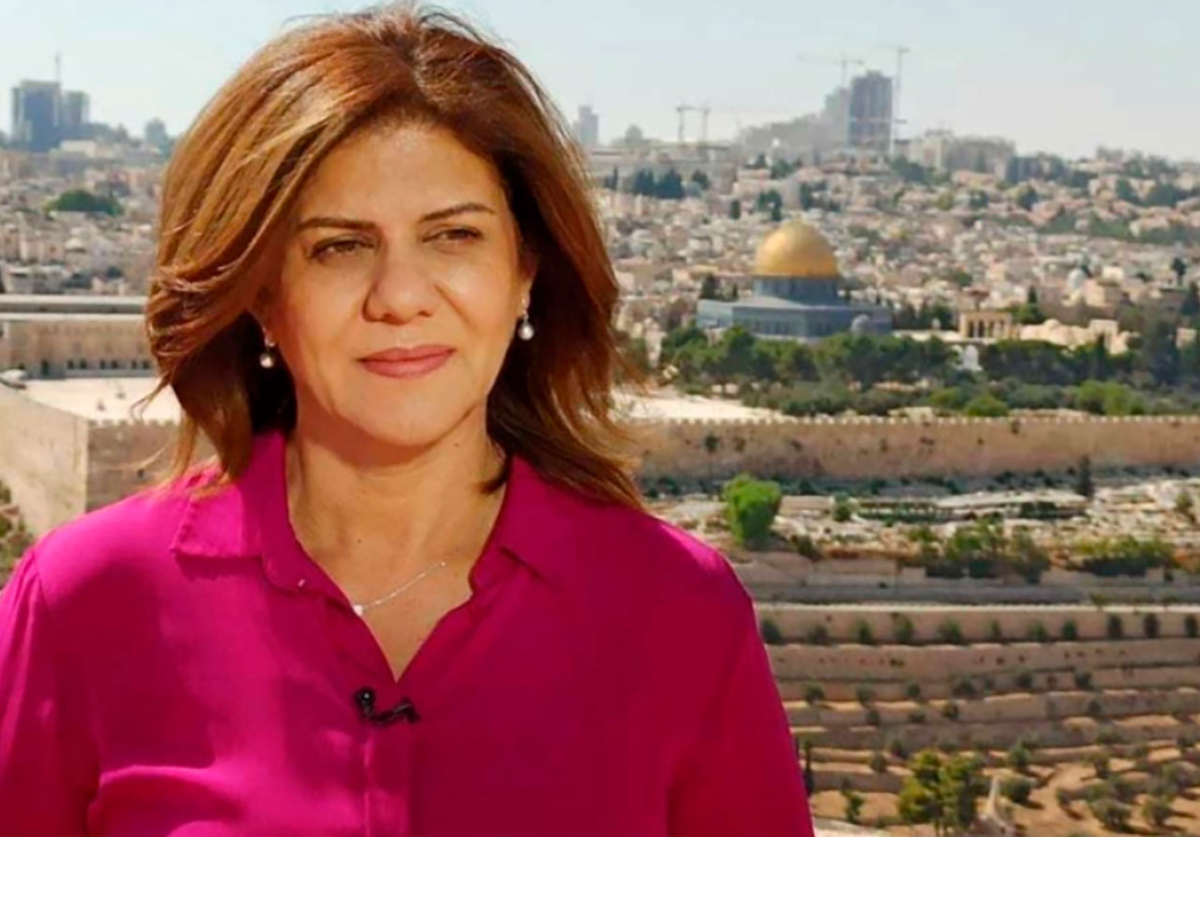 CJPME Factsheet No. 225, published May, 2022: This factsheet provides an overview of the facts surrounding the assassination of Al Jazeera journalist Shireen Abu Akleh by Israeli occupation forces.

On May 11, 2022, veteran Al-Jazeera journalist Shireen Abu Akleh was killed after being shot in the head by Israeli forces while reporting on Israeli raids in the city of Jenin in the occupied West Bank. At the time she was shot, she was standing with a group of journalists who were clearly marked with “PRESS” equipment. Ali al-Samoudi, another journalist who was with Abu Akleh at the time, was also shot in the back. Abu Akleh was 51 years old.[i]

Why were so many people moved by Abu Akleh’s death?

People around the world were shocked by the death of Shireen Abu Akleh. Abu Akleh was one of Al-Jazeera’s first female journalists, joining the outlet in 1997 and had been covering life in Palestine for over 20 years.[ii] Over time, she became one of the most well-respected journalists reporting on Palestine and her presence was felt in “millions of Arab households” through her coverage of Palestinian daily life.[iii]

The killing of Shireen Abu Akleh therefore marks a significant loss for Palestinian communities, as she was a well-respected journalist who gave Palestinians a voice in a conflict where theirs is often silenced. Even in death, Abu Akleh demonstrated how Palestinians are routinely silenced, as Israeli police violently attacked mourners and pallbearers during her funeral procession in East Jerusalem.[iv]

Multiple eyewitnesses, including several journalists, have insisted that Israeli forces were responsible for the attack, and that Abu Akleh had been deliberately targeted.[v] This is the position taken by her employer Al Jazeera, which said that Abu Akleh was “assassinated in cold blood,”[vi] and it is also the conclusion reached by the Palestinian Authority’s public prosecutor following an internal investigation.[vii]

These claims have been corroborated by multiple independent analyses. Palestinian NGO Al-Haq conducted a preliminary field investigation which indicated that “the crime was committed by Israeli soldiers,” and that it was a “willful killing” of a journalist and thus “a war crime under Article 8 of the Rome Statute of the International Criminal Court (ICC).”[viii] Bellingcat, a Dutch-based independent investigation group, similarly determined that it was most likely Israeli fire that killed Abu Akleh and that the “pattern of gunfire points to the possibility of intentional targeting of the journalists, rather than accidental crossfire.”[ix] Another investigation by CNN indicated that Abu Akleh "was shot dead in a targeted attack by Israeli forces."[x]

Israel has denied any responsibility for the killing of Abu Akleh, falsely claiming that Abu Akleh may have been killed by indiscriminate firing by Palestinian militants, or possibly that she was accidentally hit by an Israeli soldier who was trying to shoot a nearby “terrorist.”[xi] These claims have been completely debunked and discredited by the same independent probes, based on eyewitness accounts and audiovisual analysis, which found no evidence of Palestinian militants in the area and suggest that the journalists were targeted by Israeli soldiers.[xii]

Why is an independent investigation necessary?

Israel has repeatedly demonstrated that it is unable and unwilling to investigate and prosecute Israeli soldiers for the unlawful killing of Palestinians. Israel’s largest human rights organization, B’Tselem, refers to Israel’s military investigation process as a “whitewash mechanism” which is “measured by its ability to continue to successfully cover up unlawful acts and protect perpetrators.”[xiii] Israeli NGO Yesh Din has similarly found that “the military law enforcement system seeks to avoid investigating and prosecuting soldiers who harm Palestinians.”[xiv]

Moreover, Israel has said it will not conduct a criminal investigation into Abu Akleh’s death, reportedly because such an investigation would be too divisive among the Israeli public.[xv]

Given Israel’s lack of credibility and its unwillingness to properly investigate Abu Akleh’s killing, an independent and international investigation is necessary to ensure that perpetrators are held accountable.

Why would a joint PA-Israel investigation be absurd?

Although Israel has tried to deflect criticism by proposing a joint investigation with the Palestinian Authority, it is unreasonable to expect Palestinians, an oppressed group, to jointly investigate crimes committed against them with Israel, the occupying power which rules over them. As stated by the Palestinian Authority’s ambassador to the UN, Riyad Mansour, “an investigation on this issue with those who are the criminals” would be unacceptable.[xvi] Instead, the PA has promised to cooperate with an international investigation led by any party other than Israel and has submitted a formal request for an independent investigation by the ICC, since the killing of a journalist is a war crime under international law.[xvii]

Does Israel have a history of targeting journalists?

Israel is known to target journalists with violence and harassment. Some estimates provided by the Palestinian Ministry of Information and organizations concerned with the safety of journalists conclude that Israel has killed between 45 to 55 journalists since 2000.[xviii]

A year earlier during Israel’s assault on Gaza, Israeli airstrikes destroyed an 11-story residential tower which hosted the offices of international media outlets, including Al Jazeera and the Associated Press.[xix] Reporters Without Borders urged the ICC to investigate the attack, stating that “deliberately targeting media outlets constitutes a war crime.”[xx]

In April 2022, the International Federation of Journalists (IFJ) submitted a complaint before the ICC, alleging that “Israel’s systematic targeting of journalists working in Palestine and its failure to properly investigate killings of media workers amount to war crimes.”[xxi] The case highlights four instances of journalists who were “killed or maimed by Israeli snipers” while wearing “clearly marked PRESS vests.”[xxii] Following Shireen Abu Akleh’s death, the IFJ has stated it “will seek to add [her] case to the ICC complaint.”[xxiii]

CJPME has urged Canada’s Foreign Affairs Minister to insist upon an independent and international investigation into Shireen Abu Akleh’s assassination, so that the perpetrators can be held accountable.[xxiv] In particular, Canada should give its support to an investigation by the ICC, as pursued by the Palestinian Authority and the International Federation of Journalists.

[viii] Al-Haq, “Press Release: The Killing of Shireen Abu Aqleh Highlights Israel’s Impunity for Crimes and Increased Use of Arbitrary Lethal Force against the Palestinian People,” May 12, 2022.

[x] CNN, “'They were shooting directly at the journalists': New evidence suggests Shireen Abu Akleh was killed in targeted attack by Israeli forces,” May 24, 2022.

[xi] IDF, “Investigation of the shooting incidents that led to the death of reporter Sheerin Abu Akala,” May 13, 2022; Maureen Clare Murphy, “Even in death, Shireen Abu Akleh exposes Israel’s lies,” Electronic Intifada, May 14, 2022.

[xii] B’Tselem, “Documentation of Palestinian gunfire, distributed by Israeli military, could not have possibly been the one that killed Journalist Shireen Abu Akleh,” May 11, 2022; Joseph Krauss, “Review suggests Israeli fire killed reporter, no final word,” Associated Press, May 24, 2022; Bellingcat 2022; CNN 2022.