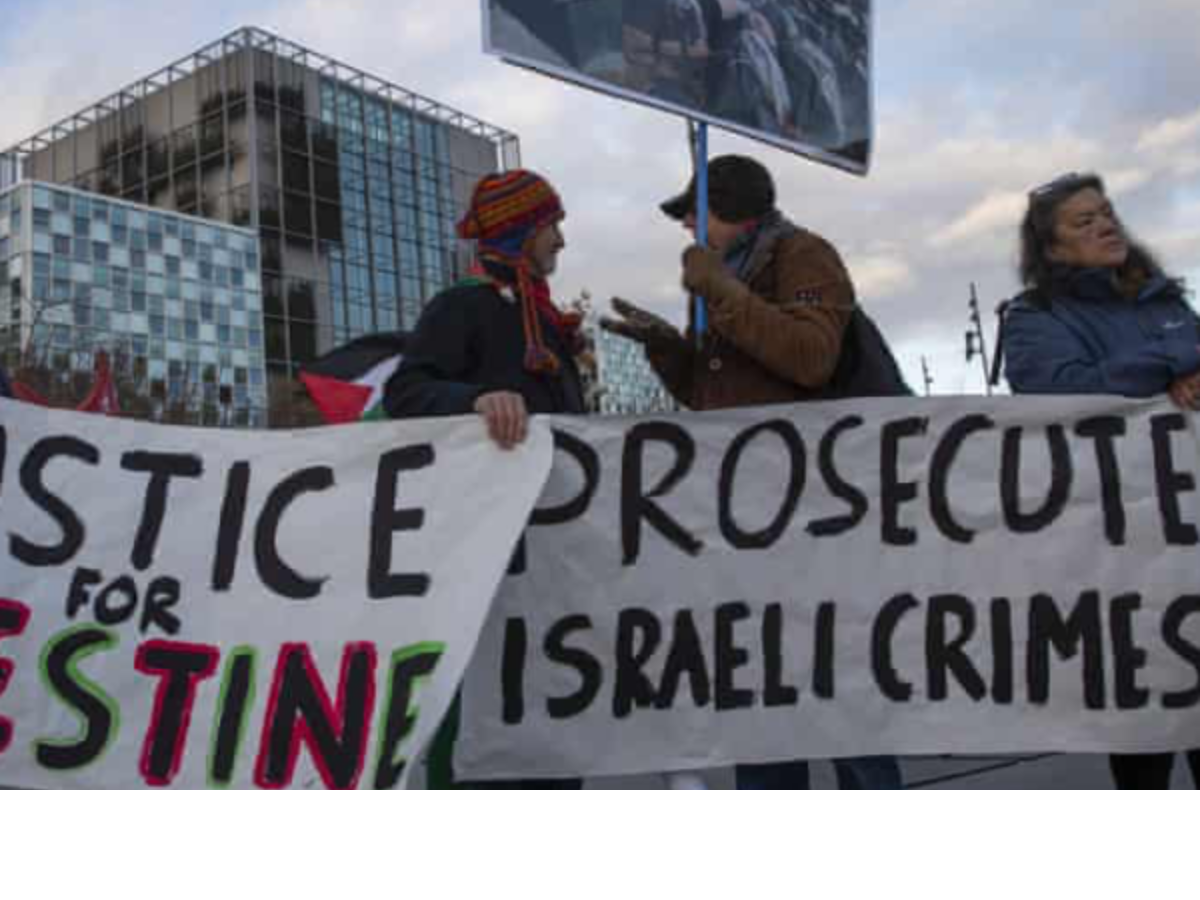 CJPME Factsheet No. 228, published July 2022: This factsheet provides an overview of the International Criminal Court (ICC)'s investigation of war crimes in the occupied Palestinian territories. It explains why the ICC decided to open an investigation, why it has proper jurisdiction in Palestine, and why an investigation is necessary.

On March 3, 2021, the International Criminal Court (ICC) launched an investigation into alleged war crimes committed by Israeli or Palestinian forces in the occupied Palestinian territories (OPT, including the West Bank, East Jerusalem, and Gaza) since June 13, 2014.

What is the ICC?

The ICC was established in 1998 to investigate and prosecute individuals charged with the “gravest crimes of concern to the international community” as outlined in the Rome Statute: war crimes, genocide, crimes against humanity, and the crime of aggression.[i] The ICC prosecutes only in cases where States are unwilling or unable to do so themselves.

There are 123 countries (including Canada) that are party to the Rome Statute, although not all have signed and ratified it; notable exceptions include China, India, Russia, Israel and the United States.  Some countries believe the court has too little authority, making it ineffective at prosecuting war criminals. Other countries consider the Court too powerful, and a threat to their sovereignty.  Others argue it is too vulnerable to political bias.[ii]

The ICC’s legal processes works differently than national courts. First, the Office of the Prosecutor determines if there is sufficient evidence of crimes that fall under the jurisdiction of the ICC. Then, the ICC goes through an investigation, a pre-trial, a trial, appeals, and the enforcement of a sentence (if applicable).[iii]

What prompted the ICC to open an investigation in the OPT?

The demand for an ICC investigation followed Israel’s 50-day military offensive against Gaza in 2014, when Israel killed over 2,251 Palestinians, including 551 children. Following the war, a United Nations Commission of Inquiry found that both Israeli forces and Palestinian groups may have committed war crimes.[iv] Some of the alleged crimes documented by the UN and human rights NGOs include the use of unnecessary lethal force by Israeli forces against Palestinian protestors in Gaza, Israeli airstrikes against civilians and civilian infrastructure, Israel’s illegal settlements, and the indiscriminate firing of rockets by Palestinian military groups.[v]

Several months later, in January 2015, the State of Palestine acceded to the Rome Statute, accepting the authority of the ICC, and also lodged an official complaint with the Court over alleged war crimes in the OPT. This prompted the ICC’s Prosecutor to open a preliminary investigation to answer questions around the jurisdiction, admissibility and advisability of the case. Five years later, and following an additional pre-trial determination, the ICC finally concluded that the Court indeed had proper jurisdiction and that the case had merit, allowing an investigation to proceed.[vi]

Is the ICC investigation only focused on Israel?

Israel and its supporters have tried to argue that the ICC investigation is unfair to Israel. Israel’s Prime Minister at the time accused the ICC of singling out Israel, and called the investigation “pure anti-semitism.”[vii]

However, the ICC investigation in the OPT is not solely focused on Israel, but will be investigating alleged war crimes by both Israelis and Palestinians. In her statement announcing the investigation, then-Chief Prosecutor Fatou Bensouda said that “our central concern must be for the victims of crimes, both Palestinian and Israeli, arising from the long cycle of violence and insecurity that has caused deep suffering and despair on all sides.”[viii]

Does the ICC have proper jurisdiction to investigate in the OPT?

Countries opposed to the ICC investigation have suggested that the court does not have proper authority to investigate crimes committed in the OPT. They argue that because Israel is not a party to the Rome Statute, and Palestine is not a recognized country, the Court does not have jurisdiction.[ix] In 2019, ICC prosecutor Bensouda asked the court’s Pre-Trial Chamber to look into these questions.[x] In February of 2021, the Pre-Trial Chamber concluded that the ICC does have proper jurisdiction over the Palestinian territories occupied by Israel,[xi] in part because Palestine is itself a party to the Rome Statute.[xii]

Why is an ICC investigation necessary?

The ICC’s mandate is to investigate crimes in cases where states are unable or unwilling to investigate themselves. A 2022 report by Israeli human rights organization Yesh Din found that only two percent of abuse complaints against Israeli soldiers lead to prosecution.[xiii]  For its part, Israeli human rights organization B’Tselem concluded that Israel’s military investigation process is nothing more than a “whitewash mechanism,” and that the Israeli state cannot be trusted to investigate crimes committed in the OPT.[xiv] As such, under existing Israeli law, Palestinians don’t have a way to hold Israeli forces accountable for their crimes.

The ICC investigation may also provide an avenue by which Israeli leaders can be held accountable for decisions they make which result in significant loss of life or suffering of Palestinians.  If convicted, Israeli leaders would risk being arrested by countries party to the ICC when travelling.  Ultimately, this may cause Israeli leaders to be more restrained in the types of policies and campaigns they unleash against the Palestinians.

Do Israel and Palestine support the investigation?

The Palestinian militant group Hamas also welcomes the ICC investigation, even though it stands accused of war crimes which will be investigated by the court. For its part, Hamas believes that its actions amount to “legitimate resistance” and do not violate international law.[xvi]

Israel, however, has been overtly hostile toward the ICC investigation. Following the investigation’s launch, Israel’s Attorney General asserted that Israel is capable of investigating itself, and said there was “absolutely no place for the ICC’s intervention in matters that are under the jurisdiction of the State of Israel.”[xvii] In April of 2021, Israel announced “that it will not cooperate with [the ICC’s] probe.”[xviii] Instead, Israel has responded by threatening to impose sanctions on the Palestinian Authority,[xix] encouraging the US to impose punitive sanctions on ICC officials,[xx] and pledging to protect Israeli officials from possible prosecution.[xxi]

What is Canada’s position on the ICC investigation?

For years, Canada has repeatedly sent letters to the ICC intended to discourage the Court from proceeding with an investigation. Like other opponents of the investigation, Canada argues that because Palestine is not considered a state, the ICC does not have jurisdiction.[xxii] However, when the investigation was launched in 2021, Canada affirmed that it nonetheless supports the ICC and “continues to respect the independence of its judges and of the ICC prosecutor.”[xxiii] Canada, as a middle power, would be wise to support the work of the Court, as Canada may need its protection one day.  If Israeli or Palestinian officials are fo und guilty by the Court, Canada should participate in the enforcement of the ICC verdict, including by exercising universal jurisdiction to deliver accused persons to the Court.

[i] International Criminal Court (ICC), “How the Court Works”

[x] ICC, “Statement of ICC Prosecutor, Fatou Bensouda, on the conclusion of the preliminary examination of the Situation in Palestine, and seeking a ruling on the scope of the Court’s territorial jurisdiction,” December 20, 2019

[xi] ICC, “Decision on the ‘Prosecution request pursuant to article 19(3) for a ruling on the Court’s territorial jurisdiction in Palestine’,” February 5, 2021

[xiii] “Only 2% of abuse complaints filed against Israeli soldiers lead to prosecution,” Middle East Monitor, May 24, 2022