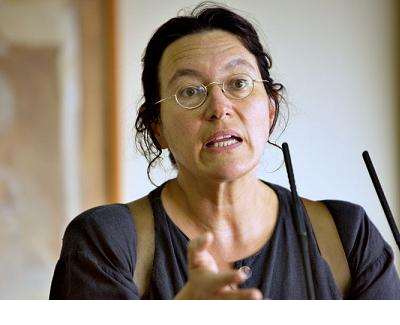 Join us as Amira Hass, a journalist with the Israeli newspaper Haaretz since 1989, shares her views as a journalist on the Israeli-Palestinian conflict, and Palestinians’ experiences under Israeli occupation. Sponsored nationally by Canadians for Justice and Peace in the Middle East, and KAIROS: Canadian Ecumenical Justice Initiatives.

About Amira Hass and her lectures

Hass, a journalist with Ha'aretz based in Ramallah, has been covering daily life in the occupied Palestinian territories since 1991. She is the only Jewish Israeli journalist to have lived full-time in the OPT: Gaza from 1993 to 1997, and the West Bank since 1997. Hass describes her role as "writing about the Israeli occupier, by way of describing the life of Palestinians." Her lecture, Israel-Palestine: Fear of the Future, will discuss Israel's occupation, and Palestinians' ways to resist.

Ms. Hass herself is a recipient of the International Press Institute’s World Press Freedom Hero Prize (2000), the UNESCO/Guillermo Cano World Press Freedom Prize (2003), the International Women's Media Foundation’s Lifetime Achievement Award (2009), and numerous other awards. Born in Jerusalem, she is the daughter of two survivors of the Bergen-Belsen concentration camp. She is the author of Drinking the Sea at Gaza: Days and Nights in a Land under Siege , and co-author of Reporting from Ramallah: An Israeli Journalist in an Occupied Land.