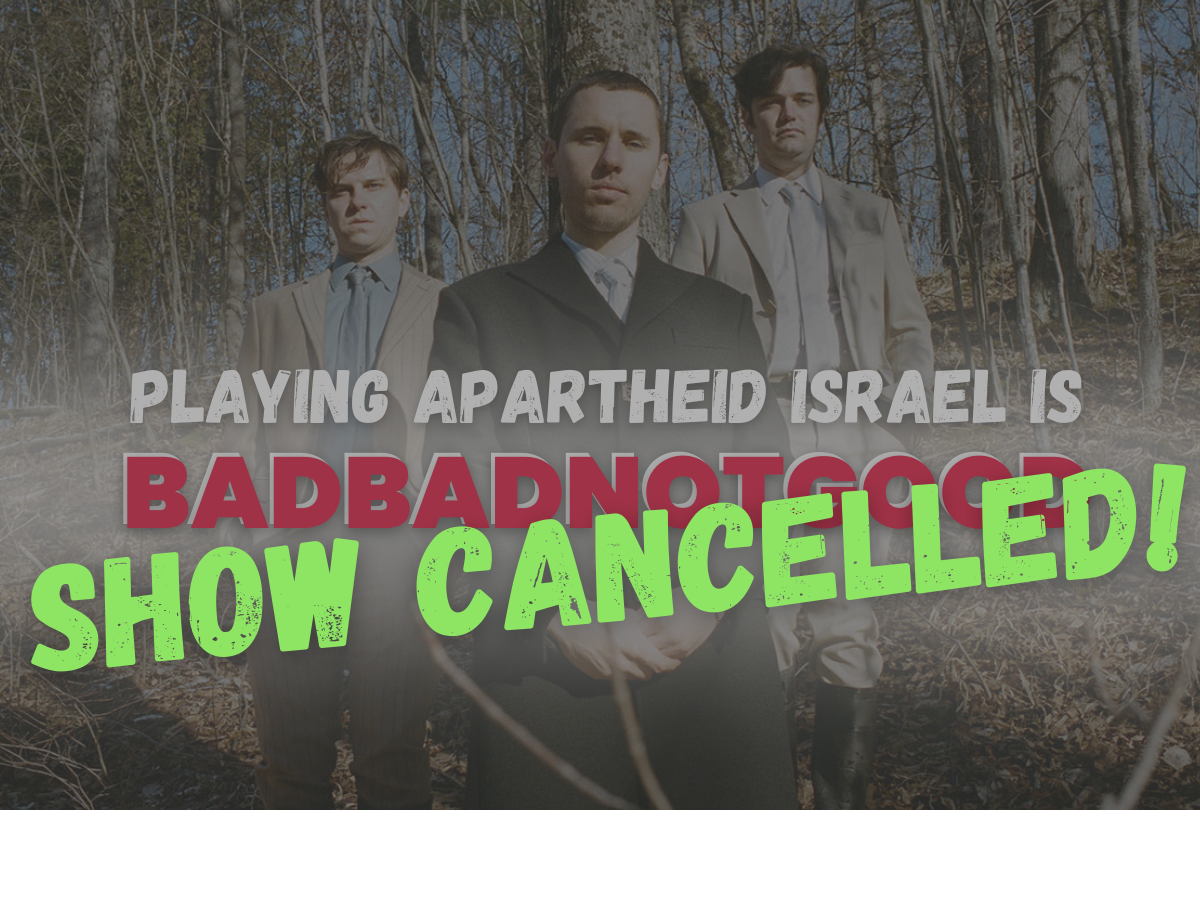 Update June 12, 2022: BADBADNOTGOOD will no longer be playing their July concert in Tel Aviv! The venue claims that the show has been 'postponed' and will be arranged at a later date. CJPME asks BADBADNOTGOOD to respect the cultural boycott of Israel and refrain from re-booking this show in solidarity with the Palestinian people.

Below is a letter sent by CJPME to Toronto band BADBADNOTGOOD on June 9, 2022, urging them to cancel their upcoming show in apartheid Israel.

We are writing to you to urge you to respect the cultural boycott of apartheid Israel and cancel your upcoming July 5th show in Tel Aviv.

For years, Palestinians have been calling upon artists to boycott Israeli cultural institutions until Israel respects the human rights of Palestinians. You may be aware that just this morning, Big Thief canceled two shows in Tel Aviv, making the principled decision to withhold their cultural labour in support of justice for the Palestinian people. We encourage you to follow their example and cancel your performance immediately.

Unfortunately, the cultural boycott is more necessary than ever. Last year, Israeli forces killed 319 Palestinians in the occupied Palestinian territories, including 71 children. The consensus among human rights organizations including Amnesty International and Human Rights Watch is that Israel is practicing apartheid, a crime against humanity. We need artists like you to lead the way and demonstrate to the world that such violence and racism cannot continue with impunity.

We also want to draw your attention to the fact that your upcoming show in July is scheduled to take place at the same Tel Aviv venue, “Barby,” which was to host the shows cancelled by Big Thief. During Israel’s brutal bombing of Gaza in 2014, this venue distributed T-Shirts to Israeli soldiers which said “Fuck You – We’re from Israel.” They posted an image on social media celebrating this gesture the exact same day that Israeli airstrikes destroyed a UN-run school, killing 16 people and injuring 200 more. This can hardly be considered an apolitical venue.

Moreover, following Big Thief’s decision to cancel their shows, Barby posted a statement calling them “a bunch of miserable spineless musicians” and wishing them “all the evil in the world.” We urge you not to give your endorsement to an immoral venue that celebrates massacres of Palestinians and deploys vicious personal attacks those who disagree with them.

We insist that your listen to the call from Palestinian civil society and cancel your complicit concert in apartheid Israel.