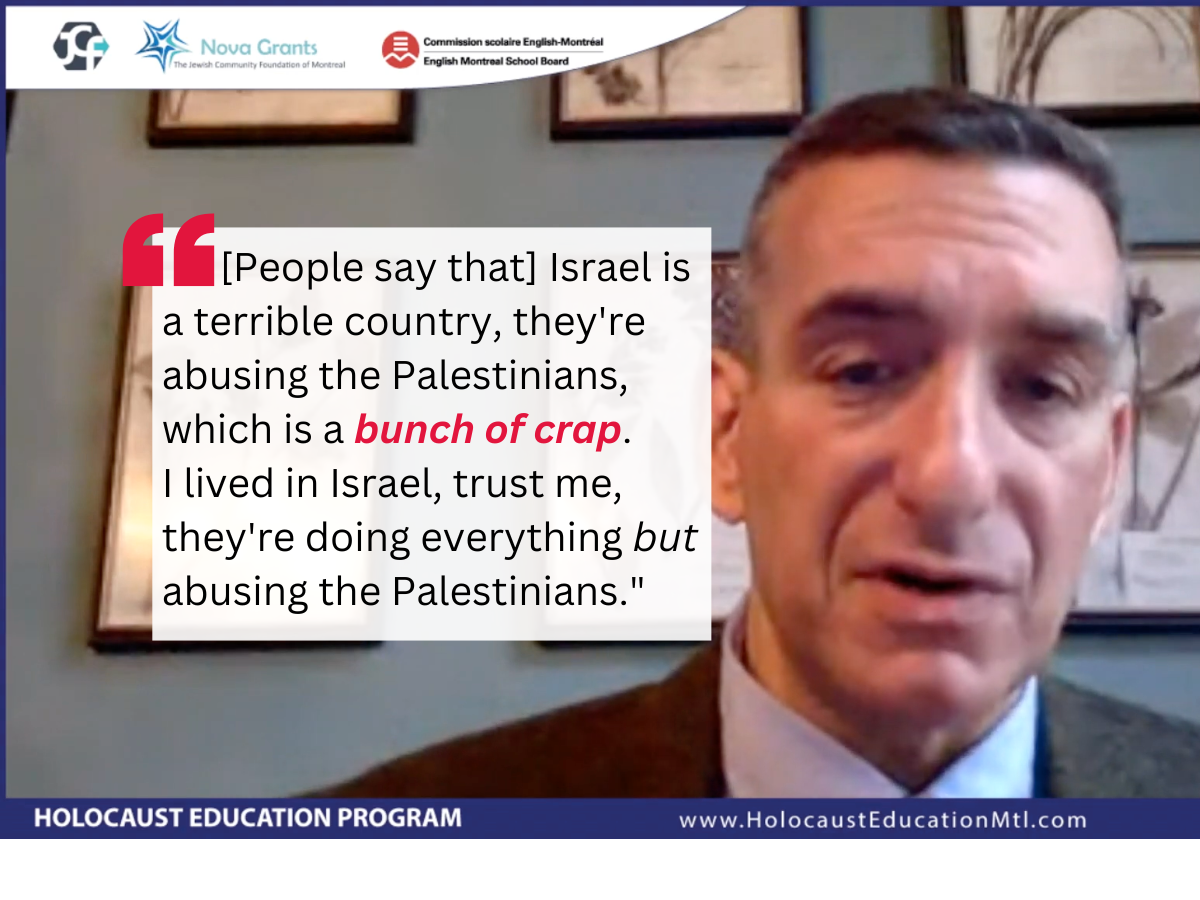 Montreal, January 20, 2023 - CJPME sent a letter to the English Montreal School Board (EMSB) regarding the false and harmful remarks made by a guest speaker to a history class at Westmount High School, dismissing Israel's well-documented human rights record. Read the full letter below, or click here to download a PDF version.

I am writing to express my surprise at the EMSB’s handling of the disastrous “Holocaust Education” session that was presented at Westmount High School on December 7, 2022.  It was brought to my attention through the CBC Montreal News segment presented on Saturday, January 14, 2023 [starts at 8:17 in the broadcast]. I am writing to you as President of the Canadians for Justice and Peace in the Middle East (CJPME, www.cjpme.org), an organization that has over 200,000 adherents, and local groups and volunteers in all of Canada's Major cities. CJPME’s mission is to enable Canadians of all backgrounds to promote justice, development, and peace in the Middle East, and here at home in Canada.

While my organization and I heartily encourage Holocaust education in our public schools, the EMSB must do a much better job at organizing such sessions, especially with respect to the selection and vetting of the “experts” it invites to speak at such sessions. According to the CBC Montreal News segment, Westmount High School (WHS) recently invited a US-based “Nazi Hunter” named Steven Rambam to speak at a “Holocaust education” session. The CBC news segment shows a clip from the school’s YouTube page where Rambam is shown saying, “[People are saying] Israel is a terrible country, [that] they’re abusing the Palestinians – which is a bunch of crap.  I lived in Israel. Trust me they're doing everything but abusing the Palestinians” [italics added].

From this clip alone, we can see that during the school’s “Holocaust education” session, Rambam has gone off on a tangent to make demonstrably false and harmful assertions about Israel’s treatment of the Palestinians, which is a genuine and well-documented human rights issue. In fact, virtually all of the major human rights organizations of the world, including Amnesty International[1], Human Rights Watch[2], and Israel-based B’Tselem[3] have recently issued reports detailing how Israel is practicing apartheid against Palestinians. That Mr. Rambam would dismiss the collective work of these human rights organizations as “a bunch of crap” says much about his character and lack of wisdom.

Unfortunately, at the time, the EMSB and its representatives did not take the issue seriously.  Following the incident, when questioned by parents, WHS officials explained that Secondary 3 history teachers would discuss the topic further and present the Palestinian perspective. And in the CBC Montreal segment, the EMSB marketing manager Michael Cohen is shown downplaying the episode as simply the “opinion of the speaker.”

Clearly, on this particular issue, the EMSB must be much more honest, transparent and up-front when dealing with this issue.  My organization asks that the EMSB to do the following:

The EMSB’s statement, as recommended above, should clearly communicate that Rambam’s statements were “out of line,” making clear that:

Beyond the need to properly address the fallout the Dec. 7 “Holocaust Education” session at WHS, the EMSB clearly needs to review the process by which it selects and vets its “expert” speakers. My organization was not able to find any mention of Rambam’s academic credentials qualifying him to address a “Holocaust education” session. On the Internet, Rambam is repeatedly described as simply a US-based private investigator with no mention of any formal academic training, whether in Holocaust Studies, or anything else.

Presumably, Rambam was chosen because he is a “Nazi Hunter.” But it’s certainly reasonable to ask why a “Nazi Hunter” is better positioned than someone who has academic credentials around the experiences of Jews in Europe through the mid-20th century. Surely the EMSB can understand the need for a more historical and contextualized approach.

To this point, I request that the EMSB, and the WHS explain its process for vetting speakers at its Holocaust Education sessions.

Finally, even apart from his lack of any pertinent training on the Holocaust, my organization does not believe that Rambam is an appropriate role model for teenage children. He has clearly nurtured his “rough and tumble cop” image presented in the media, and it reflects attitudes and behaviours that needn’t be glorified. For example, in a “What I’ve Learned”[4] piece by Esquire magazine, Rambam is quoted saying, among other things:

Hopefully, these positions are not representative of the other educators at the EMSB.

I look forward to your prompt action and response to my asks above.  Should you wish to discuss in person, I can be reached at 438-380-5410.

[2] “A Threshold Crossed: Israeli Authorities and the Crimes of Apartheid and persecution,” Human Rights Watch, April 27, 2021, accessed Nov. 9, 2022 at https://www.hrw.org/report/2021/04/27/threshold-crossed/israeli-authorities-and-crimes-apartheid-and-persecution

[3] “A regime of Jewish supremacy from the Jordan River to the Mediterranean Sea: This is apartheid,” B’Tselem (The Israeli Information Center for Human Rights in the Occupied Territories), January 12, 2021, accessed Nov. 9, 2022 at https://www.btselem.org/publications/fulltext/202101_this_is_apartheid