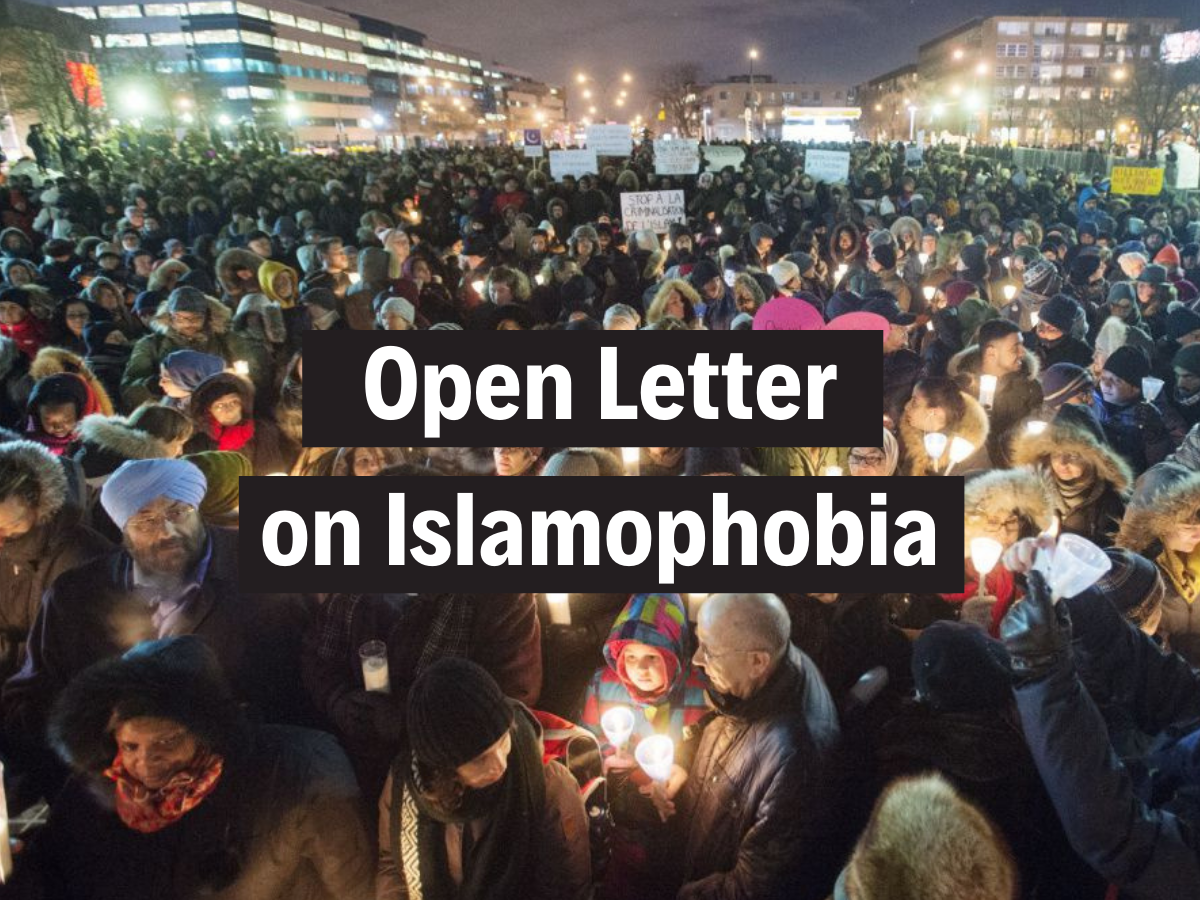 Open Letter on Islamophobia to Canada and Quebec’s Political and Civil Leaders, from the Canadian Muslim Forum and Canadians for Justice and Peace in the Middle East. January 27, 2021.

In a few days, Canadians will mark the fourth anniversary of the tragic Quebec City mosque massacre.  On January 29, 2017, a young man influenced by online hatred and racism entered the Islamic Cultural Centre of Quebec City and opened fire on Muslim-Canadian worshippers.  When he was done, six Canadians were dead, and 19 more injured.

At the time, many leaders responded promptly and appropriately.  A day after the attack, Prime Minister Justin Trudeau and many other political leaders attended a vigil in honour of the dead and injured.  To the Muslim-Canadian community, Quebec City Mayor Régis Labeaume said, “To the Muslim community, our neighbours, our co-citizens, who count on our support and solidarity, I want to say, 'We love you.'”

Less than two months after the massacre, motion M-103 was passed in the House of Commons, calling for politicians to “condemn Islamophobia and all forms of systemic racism and religious discrimination.”  A year later, the report commissioned by M-103 was published, providing 30 recommendations to counter Islamophobia in Canadian society: better reporting of hate crimes, equity in employment and services, improved training for public officials, and more.

Four years later, however, it is unclear whether Muslim Canadians enjoy substantively better opportunities or protections than they did in 2017.  Recent weeks have seen a new surge of high-profile fear-mongering and innuendo in Canada’s cultural and political circles.  The January 11 appointment of Ginella Massa, a hijab-wearing Afro-Latina as host of CBC’s Canada Tonight was the first of three national incidents to trigger a bigoted response.  Among other criticisms, Quebec opinion writer Sophie Durocher suggested that Massa’s hijab on camera was a gross political statement, similar to a TV host wearing a red “Make America Great Again” ballcap.

Following the January 12 appointment of Syrian-Canadian MP Omar Alghabra as Canada’s Transport Minister, Bloc Québécois leader Yves-Francois Blanchet used innuendo when he suggested that “questions arise” from Mr. Alghabra’s former role as president of the Canadian Arab Federation (CAF).  Blanchet declined to make a specific accusation, but suggested that Alghabra was associated with "the political Islamic movement."  Notwithstanding that CAF is a secular organization, Blanchet provided no proof of any reason to object to Alghabra’s appointment, but relied on Islamophobic innuendo to raise distrust of a political opponent.

Tunisian-Canadian Bochra Manaï’s January 13, appointment as Montreal’s first-ever commissioner on racism and systemic discrimination created its own controversy.  Chosen from among 120 applicants for the position, Manaï has a Ph.D. in urban studies, a Masters in inter-ethnic relations and migration, and another Masters in urban geography.  Manaï has also been an outspoken and visible critic of Quebec’s Bill 21, which outlawed the wearing of religious garb by certain government employees. Immediately, Manaï’s appointment was subject to over-the-top criticism: an official in Quebec Premier François Legault’s office called the selection of Manaï an “error,” talk radio personalities called Manaï a “radical militant,” and a Journal de Montreal columnist cynically suggested Manaï’s job was to find racism everywhere. As journalist Toula Drimonis observed about the criticism, “I’ve never seen so many people who deny the existence of systemic racism have so many opinions about the person Montreal hired to tackle it.”

As these recent incidents make clear, just because Islamophobia doesn’t make national news every day doesn’t mean the problem is going away.  While the rest of the country goes about its business, Muslims in Canada continue to experience the scourge of Islamophobia – via the vandalism of their places of worship, the difficulty in procuring a job, the racial slurs and innuendo they must endure, and more.  The recent comments against Massa, Alghabra and Manaï both reflect the existing Islamophobia in our society, while encouraging more of it.  When political leaders exploit Islamophobic tropes, they incite fear and mistrust, and weaken the fabric of our society.  They also make the daily life of Muslim-Canadians that much harder.

With these recent incidents in mind, the Canadian Muslim Forum (FMC-CMF) and Canadians for Justice and Peace in the Middle East (CJPME) call their civil and political leaders to a higher standard, challenging them to take the following steps:

Abandon demagoguery; embrace facts.  If nothing else, the recent example of Trump in the US reminds us that populist campaigns can have devastating impacts on social cohesion – impacts that can threaten the very foundations of a democracy.  The public attacks and insinuations against Massa, Alghabra and Manaï were all demonstrably false; each of them deserves multiple apologies.  Moving forward, detractors should focus their criticism on the actual job performance of these individuals, and not on their identity or religious garb.

Acknowledge the problem of Islamophobia.  While the unsavory criticisms of Massa, Alghabra and Manaï came mostly from Quebec, the rest of Canada’s political leaders are far from innocent.  In 2017, Motion M-103’s call for a strategy to end Islamophobia met with opposition from politicians across the country.  The first step to dealing with a problem is to acknowledge it.  Opinion polls and social metrics consistently confirm that Muslims in Canada face debilitating and long-standing barriers to integration.  Canada’s political leaders must mobilize our institutions by consistently calling attention to the problem of Islamophobia in our society.

Leverage your governing status to protect ethnic and cultural groups.  Most of Massa, Alghabra and Manaï’s critics were from a majority political ideology – a reminder that acceptance of ethnic or cultural groups is one of the biggest tests of a resilient democracy.  Political leaders must not create barriers to the integration of such groups.  Instead, they must exemplify tolerance, openness and a willingness to compromise.  Only in this way will our democracy remain healthy and resilient.

Make concrete investments to eradicate Islamophobia.  The 30 recommendations of the M-103 report not only provided a reasonable assessment of Canada’s problem of systemic racism and religious discrimination, they also provided a blueprint to address the issues.  Unfortunately, precious little has been done to fund and implement the vast majority of the recommendations.  Islamophobia is bound to plague our society unless our leaders and their governments make a meaningful investment to address it.

Commemorate January 29th.  Just as December 6th is a national day of remembrance and action on violence against women, January 29th should be a national day of remembrance and action on Islamophobia and other forms of religious discrimination.  This was recommendation 30 of the M-103 report, and one of the only recommendations that actually named the issue of Islamophobia.  The Website, “I Remember January 29” (http://january29.ca) provides details on the campaign for January 29th, and enables Canadians to email Prime Minister Justin Trudeau and Canada’s other federal politicians.  While a symbolic step, it will nonetheless show that Canada is acknowledging the issue of Islamophobia, and is ready to take steps to address it.

Like Massa, Alghabra and Manaï, Muslims in Canada are not trying to be symbols.  They are simply trying to live their lives, like every other Canadian.  We honour them as fellow and equal citizens when we acknowledge that they share the same aspirations as the rest of us – for family, community, prosperity and health.  Since 2017, Muslim communities across the country have worked hard to reach out to their neighbours via open-house events, and other community initiatives.  Muslim Awareness Week, at the end of January each year, is another forum created by our Muslim co-citizens to build bridges of mutual understanding and respect.

Thomas Woodley, President, Canadians for Justice and Peace in the Middle East (CJPME)