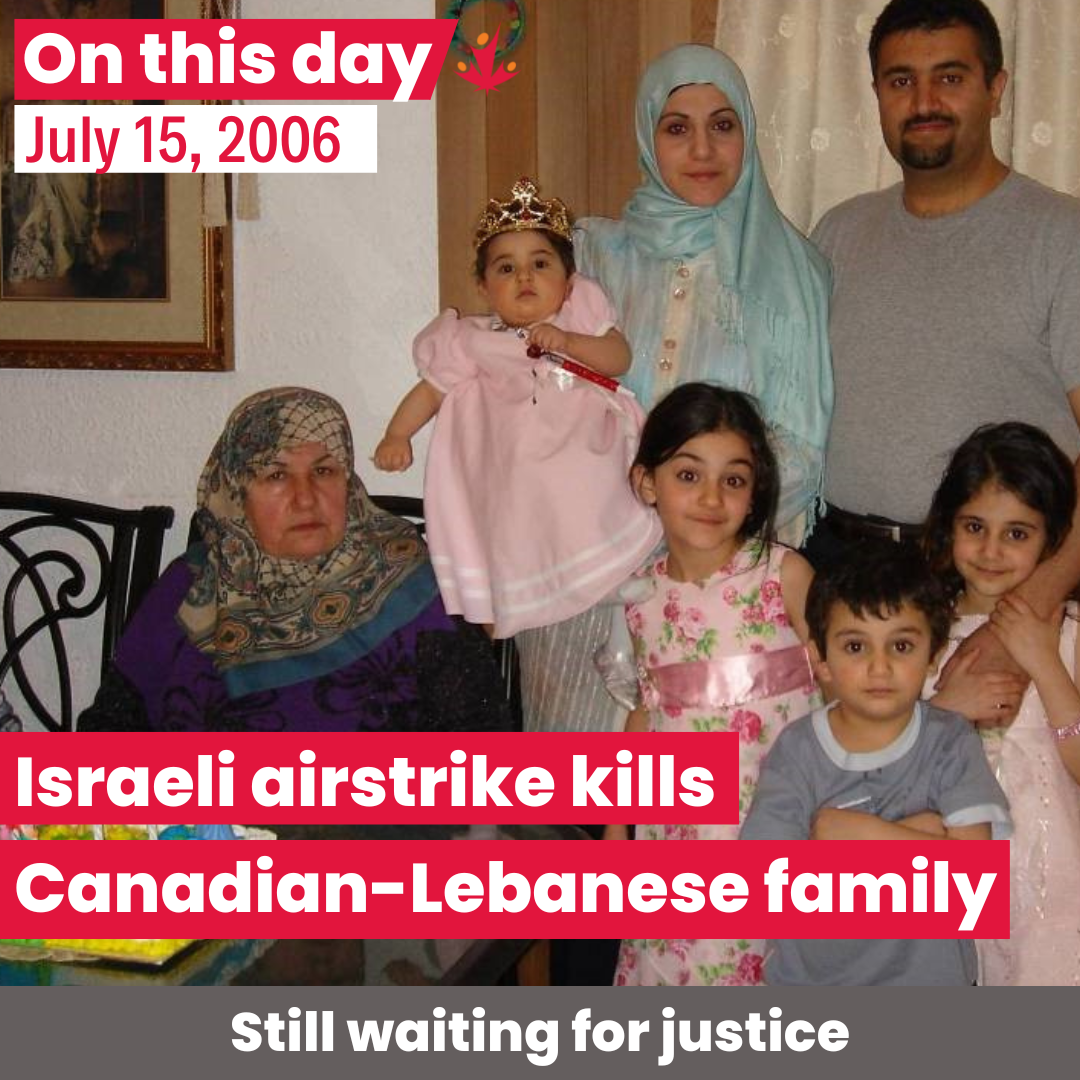 "I'm crying because my family has been annihilated and my whole country has been destroyed. Nobody, not the media nor Mr. Harper, has supported Lebanon at all, nobody is telling the truth. These people are innocent people like you and I." - Maysoun Al-Akhrass, relative of the Canadian-Lebanese family killed by Israel in Lebanon.

On this day in 2006, an Israeli airstrike on a residential home in Southern Lebanon killed a dozen members of the same family, including 8 Canadian citizens, among them four young children. Ali Al-Akhrass, a Montreal pharmacist, had wanted to take his wife Amira and four children (Salam, 1, Ahmad, 3, Zeinab, 5, and Saja, 7) to visit Lebanon as a summer vacation, to connect with their family and culture. Instead of enjoying a relaxing summer, they were caught in the crossfire of Israel’s devastating invasion of Lebanon.

On Saturday, July 15 between 6 and 7 p.m., Ali’s grandfather’s home – which they hoped would be a safe haven – was bombed. According to witnesses, a low-flying Israeli plane dropped a rocket right into the Al-Akhrass house, instantly killing eleven members of the Al-Akhrass family, including seven of the Canadian citizens who were vacationing there. Ali survived the initial attack, but he was prevented from reaching medical care by Israeli soldiers who fired upon his ambulance. He died of his injures on arrival to the hospital.

In a subsequent field report, Human Rights Watch determined that there was no Hezbollah activity anywhere in the area at the time of the attack. As a neighbor described the assault:  “When we tried to save them, a helicopter would appear in the sky and a warplane would fly around. So we got scared and stayed away. We recovered between six and eight bodies but were told there may be more, and they were all in pieces.”

Following the massacre, the family’s relatives in Montreal urged the Canadian government to demand an inquiry and "put pressure on Israel to stop this barbaric behaviour." As Maysoun Al-Akhrass told a news conference: "I'm crying because my family has been annihilated and my whole country has been destroyed. Nobody, not the media nor Mr. Harper, has supported Lebanon at all, nobody is telling the truth. These people are innocent people like you and I." However, the Canadian government failed to support the family. Prime Minister Stephen Harper offered “brief condolences” to the families, but reaffirmed his government’s support for Israel’s invasion of Lebanon, which he had called “measured.”

On this day, we are honoring the lives of the Canadian-Lebanese family who were abandoned by their own government.