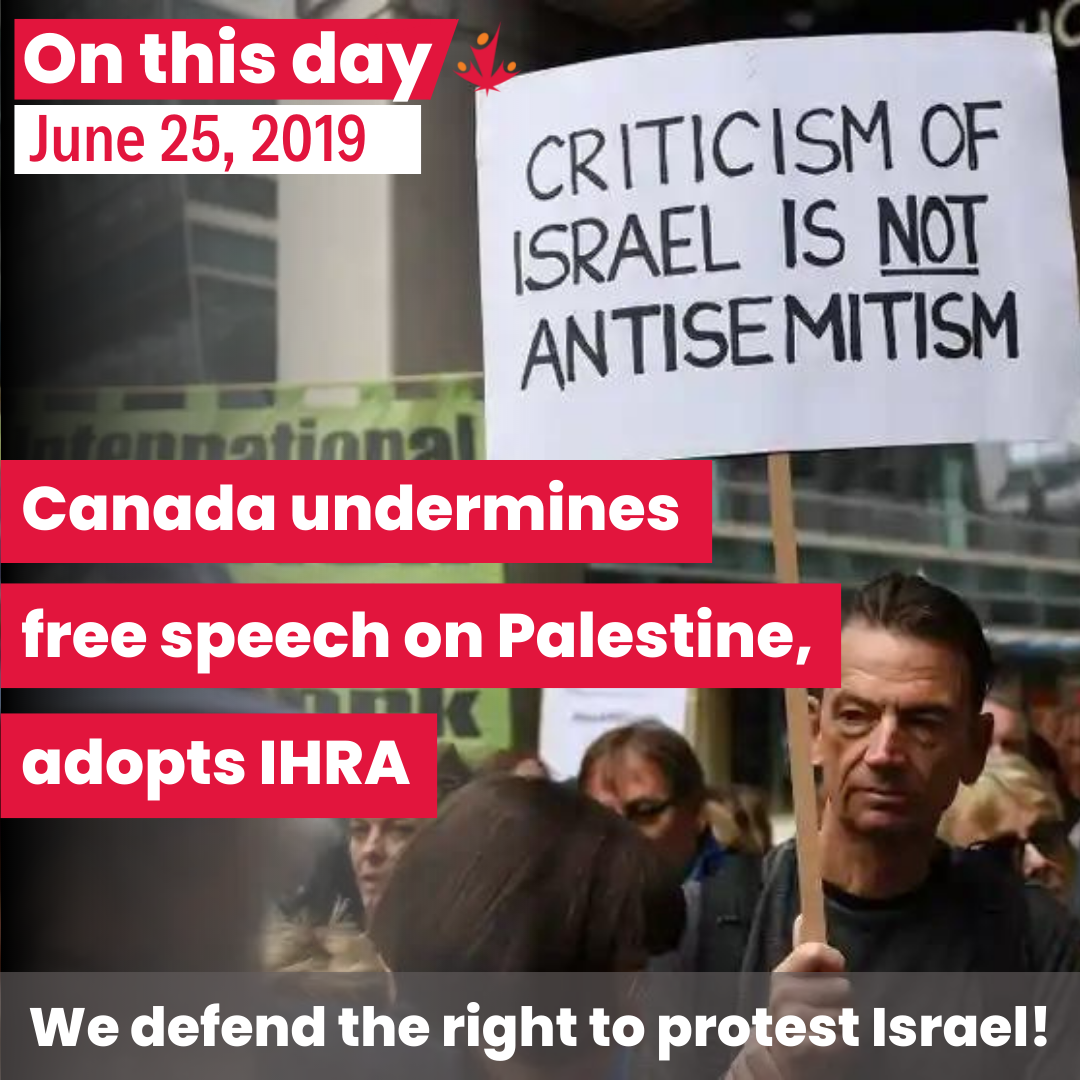 “The IHRA definition is not designed to protect Jewish communities from the rising bigotry and racist attacks we face, predominantly carried out by white supremacists. Instead, it has been employed in many countries as a bludgeon to suppress advocacy and academic freedom. Scores of Palestinian, Israeli, civil society, and human rights organizations from across the globe, as well as academics, writers, and activists—including one of the IHRA’s original authors—have condemned its anti-democratic and repressive impact.” - Independent Jewish Voices Canada (and others).

On this day in 2019, Canada undermined free speech on Palestine by adopting the discredited International Holocaust Remembrance Alliance (IHRA) definition of antisemitism, which conflates antisemitism with criticism of Israeli policies against the Palestinians. The definition was adopted without a vote as part of the government’s federal anti-racism strategy. Many civil society organizations have warned that IHRA poses a threat to free expression, including anti-racist activism.

While the IHRA definition itself is short and uncontroversial, the problem lies in its accompanied “illustrative examples,” which are meant to help institutions identify instances of antisemitism. Unfortunately, many of these examples refer in some way to speech about Israel or Zionism. Many of Canada’s proponents of the IHRA definition have openly declared that the purpose of IHRA is to censor and stigmatize political expression about Israel, and to disallow Palestinian activism. Independent Jewish Voices Canada has identified many cases in which IHRA has been used exactly in that way.

Due to the threat that IHRA poses to free speech and activism on Palestine, the adoption of IHRA has been opposed by civil society organizations including the British Columbia Civil Liberties Association, the Canadian Association of University Teachers, the Canadian Federation of Students, the Canadian Labour Congress, over 170 Jewish faculty members in Canada, and many more.

The IHRA is Designed to Silence Speech: CJPME Submission on Bill 168 (Ontario)