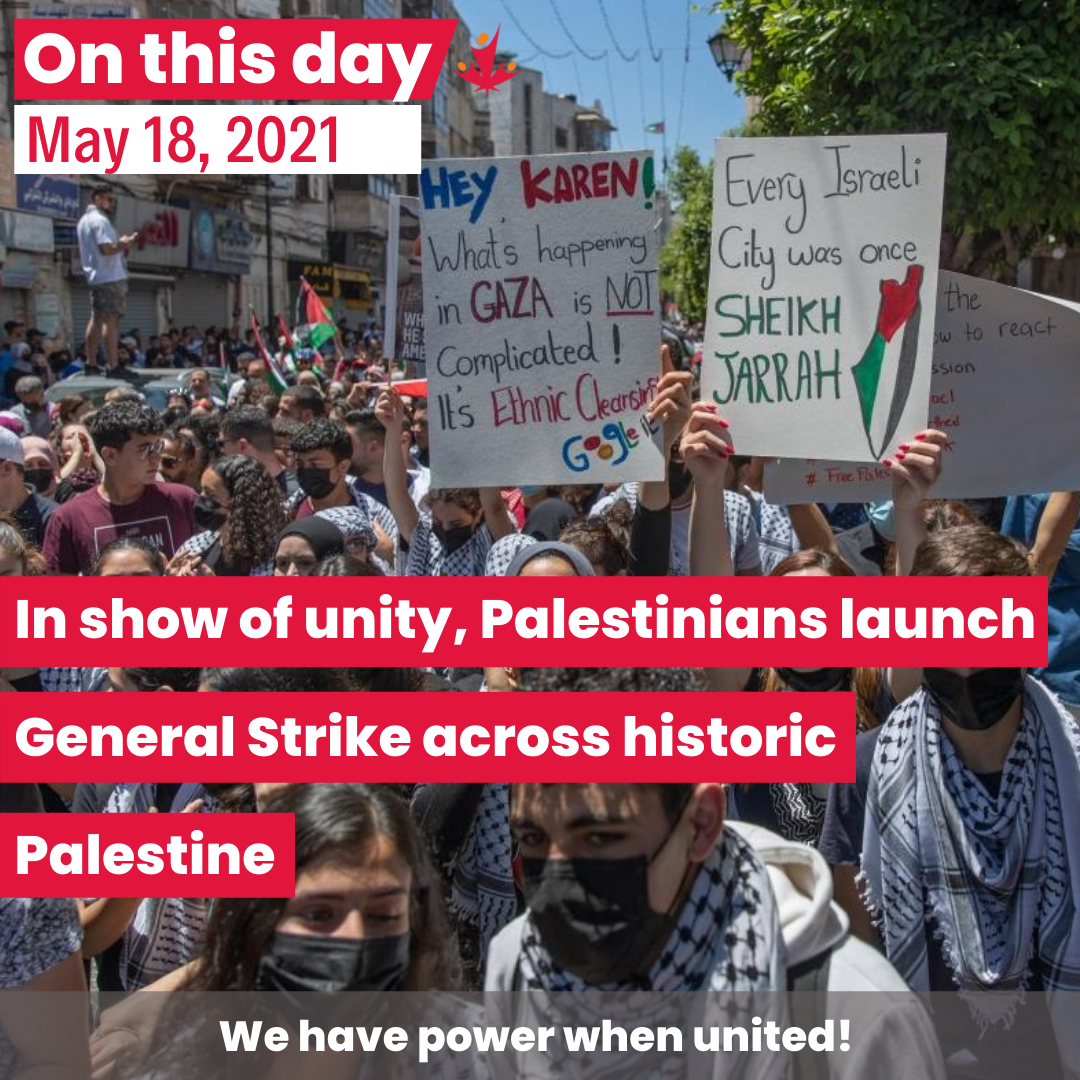 May 18, 2021: In show of unity, Palestinians launch General Strike across historic Palestine

"In this strike, Palestinians are emerging unified, regardless of the colonial space that they are permitted to exist in. The idea of a unified strike constitutes a lever for joint Palestinian national action. It is also a declaration of rejection against all agreements that divide the land. We are witnessing a turning point in Palestinian history, and this strike will constitute a turning point in our history." – Bilal Shweiki

On this day in 2021, Palestinians on both sides of the Green Line launched an unprecedented General Strike, demonstrating the unity of the Palestinian people under Israeli apartheid.  This was part of the “Unity Intifada,” or the mass mobilizations of Palestinians in May 2021 which protested Israel’s attack on Gaza, the forcible displacements and ethnic cleansing of residents in Sheikh Jarrah, and the violent raids on the Al Aqsa Mosque. The General Strike and Unity Intifada brought together Palestinians across the West Bank, Gaza, East Jerusalem, and Israel (’48 Palestine) – between the Mediterranean Sea and the Jordan River. Palestinians also called for the international community’s help, resulting in tens of thousands of people worldwide protesting Israel’s brutal aggression.

The General Strike was unique, because it was formed and organized by Palestinians in the occupied West Bank, as well as citizens of Israel (’48 Palestine), demonstrating that they share struggles against Israeli oppression. This put significant stress on the Israeli economy, which is largely dependent on Palestinian labour. It is estimated that the strike caused massive monetary losses in the construction sector, and it also affected other sectors including sanitation and public transportation.

Dareen Tatour, Palestinian poet and writer explained it this way: "The general strike will highlight that Israeli hospitals are run by a big percentage of Palestinian doctors and that the Israeli economy depends on Palestinian workers, and this strike will cause loss to Israel, if it is successful. It is a big challenge to us because there's a potential that Palestinian workers could be fired because they joined the strike. But that's all we have - strikes, protests, and demonstrations, and most important of all the will to stand in front of the occupation."

The General Strike during the Unity Intifada left a historic mark on Palestinians everywhere. It demonstrated to Palestinians within Israel, the West Bank, Gaza, and globally, that when they mobilize united, they have power.

The Manifesto of Dignity and Hope

Defying Fragmentation and the Significance of Unity: A New Palestinian Uprising

Jerusalem Youth at the Forefront of 2021’s Unity Intifada

In Pictures: In show of unity, Palestinians go on strike