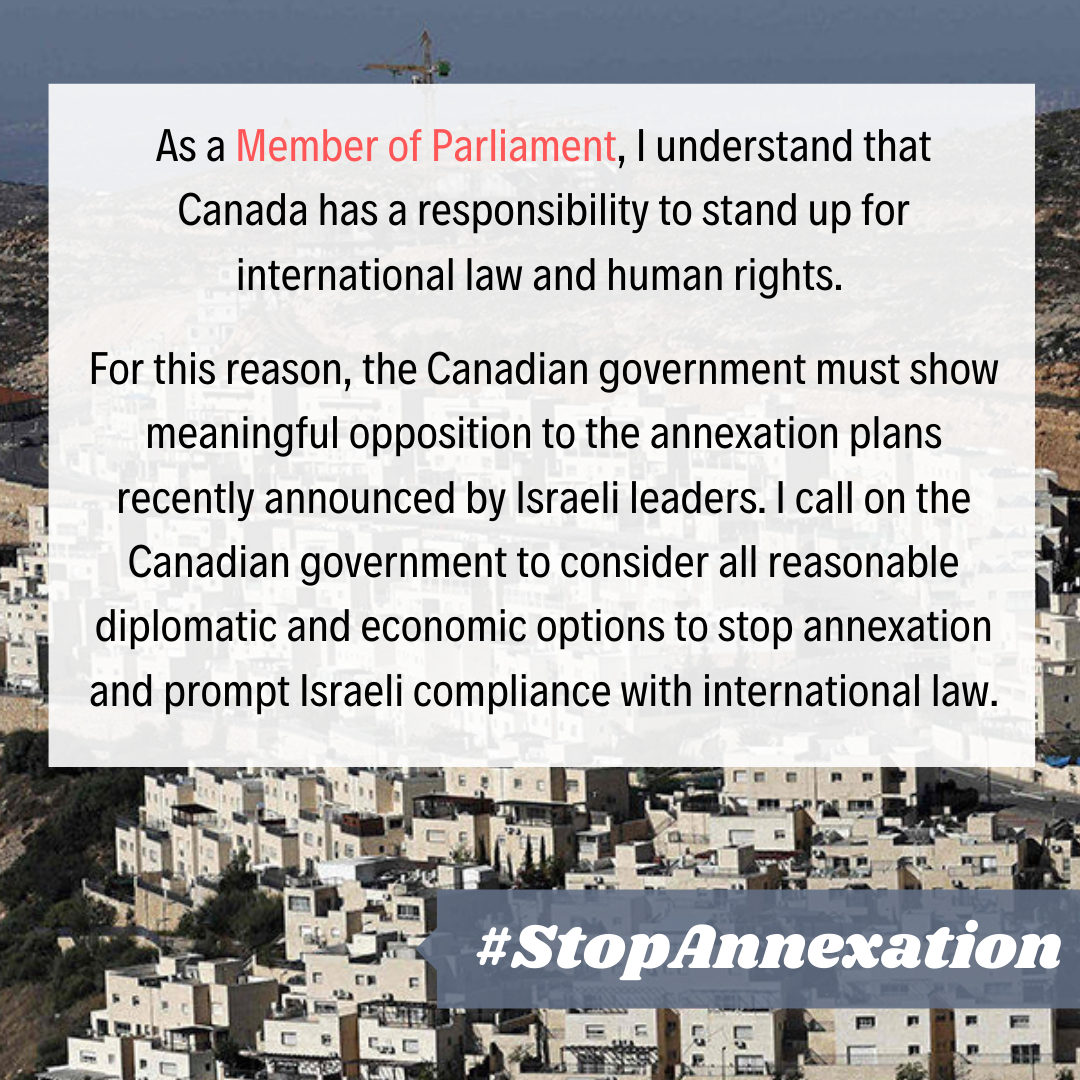 As a group of Canadian civil society organizations that follow the Israel-Palestine conflict very closely from a humanitarian and human rights perspective, we are asking you as a Member of Canada’s Parliament to sign the pledge below.  This pledge calls for a concrete Canadian response to Israel’s announced plans to illegally annex territory intended for an eventual Palestinian state.

Earlier this year, Israeli Prime Minister Netanyahu announced his intentions to unilaterally annex huge swaths of the West Bank and all of its settlements, consisting of territory that Israel has been militarily occupying since 1967. This process could begin as early as July 1, 2020 with the tacit support of the United States under President Trump. If annexation takes place, it would be a colossal injustice to the Palestinian people, explicitly illegal under international law, and would virtually eliminate the possibility of any negotiated resolution.

Not only will a move like this on Israel’s part defer a peaceful settlement of the conflict between Israel and the Palestinians, it will also result in additional misery and suffering for millions civilians, mostly Palestinian but also Israeli.

Israel’s announcement contradicts the premises of decades of internationally sanctioned negotiations between Israel and the Palestinians.  It also runs entirely counter to the policy of all of Canada’s major federal political parties, which each support a negotiated settlement between Israel and the Palestinians, with two nations existing side-by-side with peace and security for all.

Israel’s annexation plan is vigorously opposed by the Palestinians, and has been publicly condemned in strong terms by the European Union,[i] the UK,[ii] France,[iii] Germany,[iv] Norway,[v] and many more. The European Union is reportedly considering a number of options for sanctioning Israel,[vi] and a letter signed by nearly 130 parliamentarians in the UK calls on Boris Johnson to “make clear publicly to Israel that any annexation will have severe consequences including sanctions.”[vii]

Comparatively, Canada’s response has been timid, despite the fact that annexation runs counter to its official and long-held positions on Israel-Palestine.[viii] Indeed, Prime Minister Trudeau has noted his “deep concerns and disagreement” with annexation,[ix] and officials have indicated that there is “no chance” that Canada would recognize the annexation.[x] However, Canadians expect much more. On June 1st, over fifty retired diplomats, ambassadors, and former cabinet ministers, urged Trudeau to start “speaking loudly and clearly on this issue.”[xi]

While public condemnation is necessary, it is also clear that words and non-recognition are not enough: Canada never recognized Israel’s annexation of Occupied East Jerusalem (1980) or the Syrian Golan Heights (1981), but this non-recognition has not diminished Israeli control over these territories. Instead, it is imperative that the Canadian government announce strong and decisive action – action which may actually deter Israel from moving ahead with its plans. When Russia annexed Crimea in 2014, for example, Canada responded with sanctions. It is time for a consistent and principled approach to international law.

Apart from statements that Canadian political parties may have already made on this issue, we are asking Members of Parliament to sign on to our ‘No Annexation in Israel-Palestine’ pledge:

As a Member of Parliament, I understand that Canada has a responsibility to stand up for international law and human rights. For this reason, the Canadian government must show meaningful opposition to the annexation plans recently announced by Israeli leaders. I call on the Canadian government to consider all reasonable diplomatic and economic options to stop annexation and prompt Israeli compliance with international law.

This pledge is not “for” or “against” any political ideology or party, but rather a pledge in support of international law, and peace, justice and human development in Israel-Palestine.

If you are an MP, there are any number of ways to add your name to this pledge.  Either:

We will add names to the list as we receive them.  Should you have any questions about this pledge, or about the organizations supporting this pledge, do not hesitate to email or call at 438-380-5410.

[ii] Government of the United Kingdom, “Speech: Prioritising peace and cooperation in the Middle East in the midst of COVID-19,” Statement by UK Ambassador James Roscoe, April 23, 2020.

[v] Norway in the UN, “SC: The situation in the Middle East, including the Palestinian question,” Statement by Norway Ambassador Mona Juul, April 23, 2020.

[vi] Haaretz, “EU Discusses Sanctions Against Israeli Annexation That Will Not Require Consensus,” May 15, 2020.

[vii] The Guardian, “MPs press for sanctions against Israel over West Bank annexations,” May 1, 2020.