CJPME lauds UN’s decision to recognize Palestine as a state 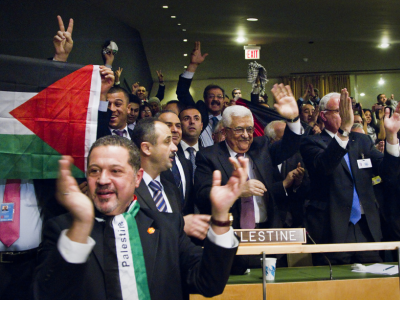 Montreal, November 29, 2012  — Canadians for Justice and Peace in the Middle East is delighted that the UN General Assembly has granted Palestine “observer state” status at the UN. The vote represents a significant step forward for the international recognition and self-determination of the Palestinian people.  While the vote does not confer full member-state status for Palestine, it will give the Palestinians access to several new legal and diplomatic tools by which they can further their aspirations for full statehood.

“Recognition that Palestine is indeed a ‘state’ is a crucial step toward the establishment of a viable, independent, sovereign Palestinian state,” says CJPME President Thomas Woodley.  “The injustices which the Palestinians face do not disappear with this vote, but this bump-up in status at the UN is an important symbolic and diplomatic boost.”  CJPME notes that despite heavy Israeli lobbying of European governments, the majority of these governments voted in favour, including heavyweights France, Norway and Spain, as well as Austria, Denmark, Finland, Greece, Iceland, Ireland, Luxembourg, Sweden, Portugal, and Switzerland. The resolution passed by a wide majority, with 138 of the UN’s 193 UN members voting in favour, 9 opposed (including Israel, the US, and Canada) and 41 abstentions.

CJPME vehemently disagrees with the Harper government’s stance on the UN vote. Yesterday, in declaring Canada’s intention to vote against the resolution, Prime Minister Harper denigrated the Palestinian bid for “observer state” status as a “shortcut,” implying that the Palestinians were trying to avoid negotiating a final agreement with Israel.  “This is not a vote against Israel, nor a vote in opposition to negotiations with Israel,” declared Woodley, “but a vote demonstrating the international community’s support for an independent, viable Palestinian state.”  CJPME encourages Western leaders to heed the international consensus in support of a Palestinian state, and to move quickly to contribute to a process resulting in its establishment...

The UN resolution also urged the UN Security Council to support Palestine’s application to that body in 2011 for admission of Palestine to full membership in the UN. The resolution also affirmed the UN members’ determination to achieve a “peaceful settlement in the Middle East that ends the occupation that began in 1967 and fulfils the vision of two States…”  CJPME regrets to note that none of Canada’s current opposition parties’ leaders have ever issued a clear call for an end to Israel’s 45-year long occupation of the Palestinian territories. They have been equally muted in their response to Israel’s repeated announcement of various “settlement” expansions and failed to insist that Israel respect the pre-1967 borders, despite the fact that all of Canada’s federal parties are nominally in favour of a two-state solution based on those borders.