Syrian atrocities should be referred to ICC 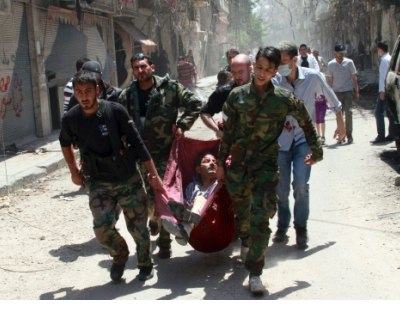 Montreal, February 21, 2013 —Canadians for Justice and Peace in the Middle East (CJPME) backs UN officials’ call to bring charges at the International Criminal Court (ICC) against both Syrian government officials and anti-government armed groups for their respective war crimes. CJPME welcomes the detailed report released February 18 by the UN-appointed Commission of Inquiry on Syria. According to the report, both government forces and anti-government armed groups have massacred civilians and hors de combat fighters. Commission official Carla del Ponte—former chief prosecutor for the international criminal tribunal on Yugoslavia—says that the Commission has identified high-level perpetrators and evidence warrants their prosecution by the ICC. “The perpetrators—whatever their allegiances—must be tried for the crimes that the evidence gathered by the Commission of Inquiry points to,” says CJPME President Thomas Woodley.

The Commission notes that the scale of the violations committed by pro-Government forces significantly exceeds the scale of those of the anti-government armed groups. The report states that government forces and allied militias murdered, tortured, raped and “disappeared” individuals whom they arbitrarily arrested during house searches and at checkpoints. Some of the atrocities were perpetrated in detention centres. Defector accounts indicate that government forces are making no distinction between civilians and fighters. The Commission notes a pattern of aerial attacks by government forces on hospitals, bakeries and bread lines, causing large numbers of civilian deaths.  The Commission—appointed by the UN Human Rights Council—acknowledged that not being able to work inside Syria had "significantly limited" its ability to investigate alleged abuses, particularly those committed by the anti-government side.

The Commission also reports that as anti-government armed groups gained control over territory, they have committed murder, torture, arbitrary arrest and hostage-taking. Car and suicide bombings of non-military targets by such armed groups have also spread terror among the civilian population. The Commission notes that the number of foreign fighters has grown in recent months, but is still a small proportion of the armed groups’ ranks.

“CJPME urges both sides to halt the violence immediately and negotiate a non-military resolution of the conflict,” says CJPME President Thomas Woodley. CJPME also exhorts Canada and other countries move quickly to provide humanitarian aid to Syrian civilians and refugees caught in the conflict. CJPME welcomes the most recent offer by Russia and the Arab League to broker talks between the Syria’s government and the opposition.  Nevertheless, CJPME urges all parties to move quickly, as each day brings new acts of horrible violence.  Russia is slated to hold talks with an Assad government delegation February 25 and with the Syrian National Coalition leader Mouaz al-Khatib in March.