MPs must speak up on Palestinian detainee’s torture-death 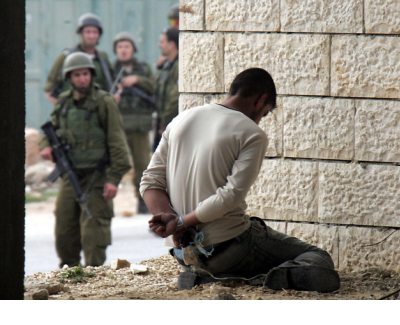 Montreal, February 26, 2013  — Canadians for Justice and Peace in the Middle East (CJPME) calls on Canadian MPs to speak out against the apparent torture-death Saturday of a 30-year-old Palestinian man in the custody of Israeli authorities. “This prisoner’s death is horribly reminiscent of black detainees’ deaths in apartheid-era South Africa,” says CJPME President Thomas Woodley. The IDF and Shin Bet (Israel’s domestic intelligence agency) arrested Arafat Jaradat (30) at his home in the small town of Sa’eer, near Al-Khalil (Hebron) at midnight on February 18, alleging that he had thrown stones at cars carrying Israelis from a nearby “settlement.” A doctor present at the autopsy conducted by Israel’s forensics institute in Tel Aviv reports that Jaradat’s body displayed signs of beatings in the days prior to his death.

According to Addameer, a prisoners’ human rights group, Kamil Sabbagh—Arafat’s lawyer from the Ministry of Prisoners and Ex-Prisoner’s Affairs—informed the judge at a February 21 hearing in Jalameh that Arafat had been subjected to torture during his interrogation. According to international media reports, Sabbagh asked the judge to have Jaradat examined by the prison doctor, but that did not happen. Sabbagh reports that Jaradat “had serious pains in his back and other parts of his body because he was being beaten up and hanged for many long hours” during his interrogation by the Shin Bet. Addameer notes that there have been 700 complaints of torture in Israeli Prisons since 2003, none of which have ever been investigated.

“Canadian MPs of all political stripes should call for an independent international investigation into Jaradat’s death, and of Israel’s arbitrary detentions and abuses of Palestinian prisoners,” says Woodley. He notes that as of January, 178 Palestinians were being held without charge or trial, and four prisoners are on a hunger strike. Since 1967, Israeli military orders have been used to detain over 800,000 Palestinians—approximately 20 percent of the Palestinian population, and as much as 40 percent of the male Palestinian population. Jaradat’s death by torture has sparked large protests across the West Bank. Thousands attended his funeral yesterday in Sa’eer. Daily protests have been held in recent weeks in solidarity with Palestinian prisoners held in Israeli prisons.

Israeli prison authorities claim that Jaradat died of cardiac arrest, and attribute the two broken ribs and bruising on his body to attempts to resuscitate him. However, the autopsy conducted in Tel Aviv found that his arteries were clear.  A Palestinian doctor present at the autopsy says that the state of Jaradat’s body suggested that he had been beaten in the days before his death. Mr. Jaradat was the father of two, and his wife is expecting their third child. CJPME notes that Israel’s establishment of colonies in the West Bank provokes justified anger among Palestinians and also violates international law.  CJPME urges MPs to oppose Israel’s “settlement” enterprise more vocally.