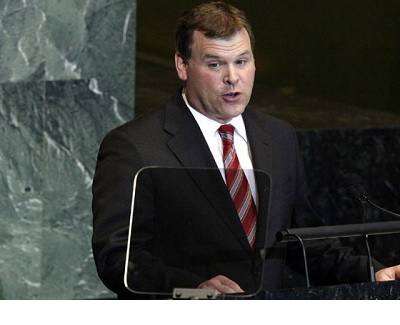 Montreal, March 7, 2013 — Foreign Minister John Baird’s recent comments at the AIPAC policy meeting earlier this week reveal much more than he may have intended, asserts Canadians for Justice and Peace in the Middle East (CJPME.) At the March 3 policy meeting of the American Israel Public Affairs Committee (AIPAC), Baird ominously promised dire “consequences” if the Palestinian Authority files a complaint at the International Criminal Court (ICC) over Israel’s “settlements” in the West Bank. “Baird inadvertently revealed that he knows that a body of neutral jurists well versed in international law—the ICC—would find Israel guilty. Otherwise, why the threats?” says Thomas Woodley, President of CJPME.

“It’s appalling that a cabinet minister would threaten to punish the weaker of the two parties to this conflict—Palestinians—for asking the ICC to consider and judge the situation,” adds Woodley. As many have pointed out, if Israel is not guilty, there is no reason for Israel or Canada to fear the matter coming before the ICC. Furthermore, in terms of the potential “consequences,” CJPME notes that the Harper government has already eliminated its funding to the UNRWA core programmes that millions of Palestinian refugees rely on for education and health care. The government has also voted against most UN resolutions calling for Israel to halt its violations of international law. “It’s hard to imagine what else the Harper government can do that it hasn’t already done to retaliate against Palestinians for defending their rights. But making vague threats about even worse ‘consequences’ is a strategy common to bullies and extortionists,” Woodley adds.

In his AIPAC speech, Baird also complained about the Palestinians’ successful bid for recognition as a “state” at the UN General Assembly in November. Yet CJPME points out that many Israeli leaders, including even Ami Ayalon—the former head of Israel’s Shin Bet intelligence agency—believes that Israel’s opposition to the bid was a mistake, one that undermines the “two-state solution.” (Ayalon expressed that assessment at a discussion hosted by the Mosaic Institute in Toronto on March 1.) CJPME notes that all Canadian federal parties, including the Conservatives, are purportedly in favour of the two-state solution.  CJPME observes that if the Harper government no longer believes in the two-state solution, it should admit it, instead of taking stances that in effect discourage negotiations towards it.

The Harper government frequently attempts to present Canada’s automatic defence of Israel’s conduct as a case of principles trumping pragmatism: a view contradicting legal analyses “on the ground” in Israel-Palestine.  Dozens of legal analyses have concluded that Israel’s “settlements” violate two key principles of international law: countries cannot acquire territory by war, and occupying military powers cannot move their civilians into the territory that they militarily occupy. “The Harper government’s stances regarding the Israeli-Palestinian conflict may earn it applause from AIPAC, but does zero to promote the compromises needed for the peace that both Palestinians and Israelis long for,” concludes Woodley.