CJPME: Canada must do more to help Syrians, especially refugees 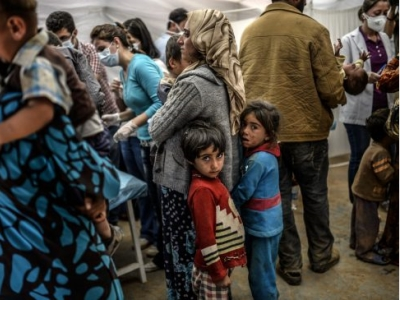 Montreal, March 26, 2013  — Canadians for Justice and Peace in the Middle East (CJPME) today released a detailed set of urgent concrete recommendations for Canada’s response to the Syrian civil war. CJPME has proposed the following:

a) More substantial contributions to UN humanitarian relief for both refugees and internally displaced;

b) Resettlement in Canada of 30,000 Syrian refugees and 10,000 Palestinian refugees normally resident in Syria;

c) Fast-tracking of family-class and independent class immigration applications from Syrians and from Palestinian refugees normally resident in Syria;

d) Robust Canadian support for referral of human rights violations by all parties to the Syrian conflict to the International Criminal Court;

e) Vigorous promotion of a non-military solution to the crisis;

f) Stringent mechanisms to prevent the use of Canadian weapons by any of the parties to the crisis and to stem the flow of arms into Syria.

“Canada must do its fair share to alleviate the suffering of the refugees and internally displaced, and to promote a durable non-military solution to the crisis,” says CJPME President Thomas Woodley. CJPME notes that Canada pledged $25 million at the donors’ conference in Kuwait at the end of January 2013—scarcely 1.6 percent of the total, although Canada’s share of OECD donor countries’ total gross domestic incomes is 4.5 percent. On March 15, Foreign Affairs Minister John Baird issued a press release that misleadingly implied that the government was making new allocations to deal with the skyrocketing number of refugees. However, on careful examination, it became clear that no new monies were being committed; Baird was simply re-announcing the allocations previously announced.

CJPME emphasises that as of early March, 1.1 million Syrians were either registered as refugees with the UNHCR, or were awaiting such registration. The UN forecasts that the number of refugees may reach 3 million by the end of 2013. Only the numbers of Palestinian refugees and refugees from the Democratic Republic of the Congo—each about 5 million—are higher. CJPME strongly urges Canadian MPs to discuss CJPME’s recommendations in their caucuses and Parliament and to respond effectively and generously to the needs of those affected by the crisis.

CJPME notes that it has become apparent that neither side in the conflict enjoys enough popular support to be able to defeat the other and restore order to the country anytime in the near future. As a result, only a non-military solution that includes all of the political currents with significant popular support will enable Syrians to repair their country’s  social, economic and political fabric, and restore its governability.