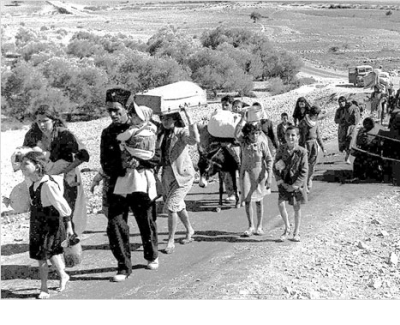 Montreal, May 15, 2013  — Canadians for Justice and Peace in the Middle East (CJPME) strongly urges Canadian MPs of all stripes to recognize the gravity, causes and unresolved nature of the Palestinian Nakba (Arabic for “catastrophe.”)  The Nakba is marked this week by Palestinians across the Middle East, those in the occupied Palestinian territories, those in Israel, and those living as refugees outside historic Palestine.  As a result of the 1947 UN partition of Palestine, and the establishment of the state of Israel, at least 700,000 Palestinians were forcibly displaced, the Palestinian civil leadership was decimated, and many Palestinian cultural institutions were partially or fully destroyed.

Palestinian historian Elias Sanbar wrote, “The contemporary history of the Palestinians turns on a key date: 1948.  That year, a country and its people disappeared from maps and dictionaries.”  Not surprisingly, some Palestinian intellectuals describe the Nakba as the cornerstone of modern Palestinian collective identity and national identity.  Other Palestinian thinkers cite the “political nature of the deliberate erasure of their story” as the source for their “stubborn dissidence” in observing the Nakba.

“Current Canadian policy positions on the question of Israel-Palestine are an ongoing affront to the memory of the Nakba, and the legitimate grievances of the Palestinian people,” asserts Thomas Woodley, President of Canadians for Justice and Peace in the Middle East.  “Canada’s vote last year against the recognition of a Palestinian state, for example, only serves to prolong the humiliation of the Palestinians.”  CJPME notes that Canada’s reduction in Palestinian refugee funding over the past several years – and the refusal to donate to core refugee development programs – also signals an indifference to the precarious living conditions  of Palestinian refugees.

The Nakba will be observed in a number of different Canadian cities through gatherings on May 15 and the subsequent weekend.  Observances will be marked with references to the events of 1948, as well as commentaries on the continuing dispossession of the Palestinian people. Since 1967, for instance, Israeli troops have occupied the West Bank, including East Jerusalem, making going to work, school, a doctor’s appointment, or a family wedding exhausting, humiliating and dangerous undertakings. Not satisfied with 78 percent of historical Palestine, Israeli leaders and belligerent “settlers” are colonising ever-larger swaths of the remainder, often evicting Palestinian families from their lands and homes in the process.