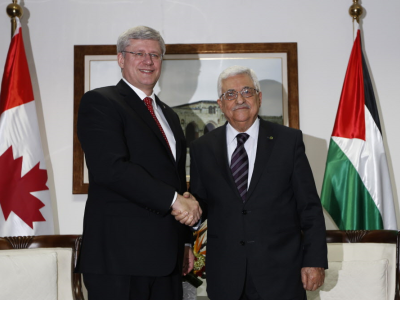 Montreal, June 17, 2013  —  Canadians for Justice and Peace in the Middle East (CJPME) welcomes today’s announcement of a $25 million aid and security package for Palestinians.  However, CJPME strongly urges the government to complement the aid package with policy stances that address the underlying causes of the Palestinians’ dire  situation. Although Foreign Affairs Minister John Baird suggested the aid was for “prosperity and greater security,” the package as conceived will do little to improve Palestinians’ long term prospects for  either.

CJPME points out that most of the aid announced this morning by Canada is short term food aid, with only a small fraction earmarked for restoring Palestinians’ ability to feed themselves. Moreover, the Harper government is ignoring the genuine reasons why Palestinians need aid in the first place. “Woefully, there is not a word about the catastrophic impact of Israel’s 46-year long military occupation, its ‘settlement enterprise’ and its harsh blockade of Gaza imposed since 2007,” says CJPME President Thomas Woodley.  For example, CJPME notes that many of the children suffering disabilities in the Gaza Strip—some of whom may now be assisted by a Canadian grant to Handicap International—can trace their disability to Israel’s periodic bombardments of the small territory.

As the World Bank and UNSCO* have noted, the key constraints on Palestinian economic development are the Israeli occupation and the Palestinian Authority’s lack of normal government powers. Were Canada to pressure Israel to end or relax its military occupation, many economists agree that the Palestinian economy would expand naturally and rapidly.  Under the status quo, for example, Israel’s erection of a 40-foot concrete wall deep into Palestinian territory has de facto annexed many Palestinians’ farms and prevents them from tending their crops. Palestinian shipments of fruit and vegetables are often held up for hours or even days at Israeli military checkpoints. Israel’s restriction of Gaza fishermen to within 3 nautical miles of the shore prevents them from fishing in the deeper waters where most of the fish are. As well, Israel prevents needed machinery from entering Gaza, forcing Palestinian businesses out of operation and driving up unemployment.

CJPME believes that the Canadian government should be pressing Israel to do all of the following: end its military occupation of Palestinian territory; halt its “settlement enterprise”; move its Wall to the 1967 border between Israel and the occupied Palestinian territories; and end the blockade of Gaza.