CJPME: Coup is blow to democracy in Egypt 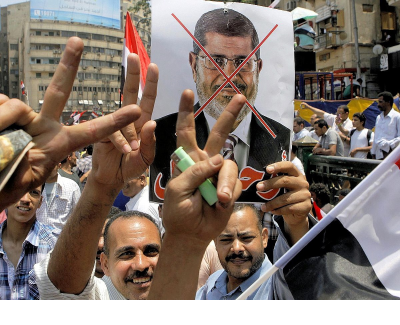 Montreal, July 4, 2013  — Canadians for Justice and Peace in the Middle East (CJPME) is deeply concerned for the future of Egypt’s democracy following the Egyptian military’s ousting yesterday of President Mohamed Morsi.  Morsi is the first elected President since the 2011 revolution and was removed following massive protests and an arbitrary ultimatum issued by the military. Morsi was declared deposed yesterday by a council led by defense minister Al-Sisi, and including the Grand Imam of Al Azhar, the Coptic Pope, and Mohamed ElBaradei—former Director General of the UN’s International Atomic Energy Agency (IAEA). The military’s move came on the heels of days of massive demonstrations estimated to be Egypt’s largest ever.

“Morsi’s first year clearly disappointed millions of Egyptians, but neither the military itself, nor political figures beholden to the military for their posts, are likely to create a promising future for all Egyptians,” asserted CJPME President Thomas Woodley. The opposition is a disparate collection of forces, with some sectors eager to re-establish the socio-economic and political structures that prevailed in the Mubarak era, and others seeking deep and rapid changes to Egypt’s political, social and economic environment.  Earlier in the week, some opposition groups had said that, despite their insistence that Morsi step down, they would not support a military coup.

CJPME urges the Harper government to demonstrate support for Egypt’s struggling democracy, and to avoid actions that could be interpreted as approval of the military coup. CJPME notes that under former President Hosni Mubarak the military had enjoyed considerable economic privileges. Morsi offended segments of the military by firing two generals. CJPME reminds Canada’s elected leaders that many of them have governed with far less popular support than Morsi initially had.

CJPME finally calls upon Canadian MPs to reconsider the entire thrust of Canada’s current Middle East policy. Canada should respect Egyptian leaders’ right to implement economic policies that meet ordinary Egyptians’ needs, and provide debt relief and multilateral aid in order to both alleviate the humanitarian crisis and diversify the economy. Canada should also ensure that Canadian corporate activity in Egypt, and elsewhere in the Middle East, benefits the region’s average citizens. The Canadian government should also resist the impulse to promote pliant “Mubarak-lite” leaders over more principled alternatives.