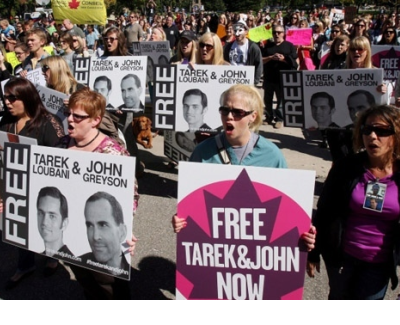 Montreal, August 20, 2013  — CJPME is calling for the immediate release of Tarek Loubani, an emergency room physician from London, and John Greyson, a Toronto-based filmmaker and a York University professor.  Both were arrested on Friday, August 16, after walking to a police station in Cairo to ask for directions to their hotel. CJPME is extremely concerned that Loubani and Greyson are still detained in at Tohra prison in Cairo four days later, with very limited consular access.

CJPME points out that no charges against the two Canadian citizens have been communicated and none are remotely plausible. “In these circumstances, we are urging the Canadian government to do their utmost to directly pressure the Egyptian authorities for the immediate and unconditional release of Tarek Loubani and John Greyson,” said CJPME’s president, Thomas Woodley. CJPME is also asking for Canadian consular officials to energetically pursue their release as we are very concerned for the safety and well-being of the two men.

Their detention comes amid bloody clashes between Egyptian security forces and supporters of ousted President Mohammed Morsi that have claimed almost 1,000 lives in recent days. Loubani and Greyson were on their way to Gaza through Egypt on a medical mission. Given the volatile situation in Egypt, traveling to the Gaza border was problematic and the two decided to prolong their stay in the Egyptian capital. Loubani was going to Gaza to train emergency room doctors and Greyson was accompanying him, to film for a documentary.

Families and friends of the two detained Canadians have created a new website (tarekandjohn.com) to provide updates on the situation, including a page for statements of support. Both men were known in their home communities for their peace-related and humanitarian activism. Loubani’s brother, Mohammed Loubani, said although he recognized that Egypt is “going through a painful transition,” arresting a physician and filmmaker and detaining them “without due process is clearly a step in the wrong direction.”