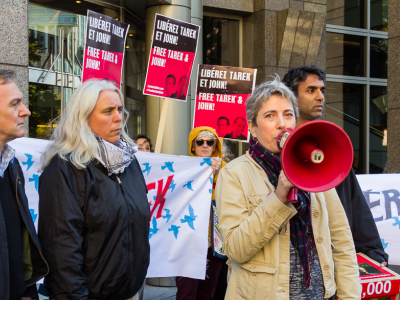 Montreal, September 16, 2013  — CJPME strongly urges the Canadian government to take stronger measures to press Egypt to release two Canadians—Dr. Tarek Loubani and York University film professor John Greyson—after the prosecutor yesterday extended their detention another 15 days. Today, it was announced that the two men had begun a hunger strike to press for their release. On transit to Gaza, the two were arbitrarily arrested on August 16. Loubani was going to Gaza to train emergency room physicians, and Greyson to work on a documentary film. The Egyptian police have yet to offer any evidence of wrongdoing, and neither Loubani nor Greyson have been formally charged with any offence.

“These men are innocent, and the Canadian government has not been as unequivocal in condemning the ongoing detentions and demanding their release as the situation demands,” says CJPME President Thomas Woodley. CJPME notes that Canadian government statements have not emphasised Greyson and Loubani’s innocence of any potential charges. Instead, they have merely declared that in the absence of confirmation of charges, the two should be released. CJPME fears that such a lukewarm pro-forma call for due process may cause Egyptian authorities to question the men’s  innocence.

“Prime Minister Harper should immediately call his Egyptian counterpart to demand Greyson and Loubani’s release; Canada has leverage with Egypt; it’s high time it used it,” Woodley adds. He notes that Canada has a robust trade relationship with Egypt, with over a billion dollars in trade in 2011 alone. Canada also exports millions of dollars of military equipment annually to Egypt. Egypt is likely also a recipient of indirect Canadian military exports, via Canada-US military agreements. CJPME believes that Canada must suspend direct and indirect arms exports to Egypt and consider suspending other trade as well, at least until Egypt’s human rights track record improves considerably.

CJPME notes that Greyson and Loubani are not the only people being arbitrarily detained in Egypt. Hundreds of people, most of them Egyptians, are currently being jailed on questionable charges, or under circumstances that to not meet reasonable standards for due process. As Amnesty International notes, many are being accused of a broad array of offences, without due consideration of whether they bear any individual criminal responsibility for the alleged offences. For that reason,  Egyptian authorities  have been sharply criticized by UN High Commissioner for Human Rights Navi Pillay as well as  various international and Egyptian human rights organizations.