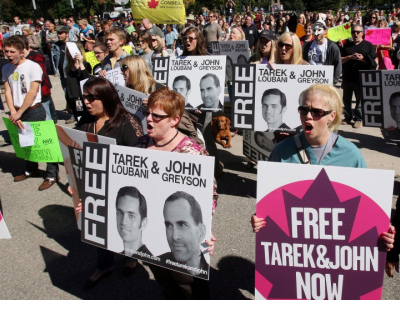 Montreal, October 7, 2013  — Canadians for Justice and Peace in the Middle East (CJPME) joins other voices across Canada in celebrating Saturday’s  release of John Greyson and Tarek Loubani from detention in Egypt.  However, CJPME urges Canadian MPs to investigate the Harper government’s muted response to the arbitrary detention and brutal assault of the two Canadians.

Last week, it was revealed that Loubani, an emergency room physician, had treated the injured from the Egyptian government’s crackdown on supporters of deposed president Mohamed Morsi, and that film-maker Greyson video-taped  him doing it.  Thus, it’s clear that the Canadian government knew early on that the arbitrary detention and assault on the two men was politically motivated.  Yet despite that knowledge, Prime Minister Harper remained silent. Only on September 29, after the detention was extended by 45 days, did he issue a statement.  Harper never phoned the Egyptian president personally.

“Greyson and Loubani could have been spared such a long detention, had the government promptly insisted on their innocence and immediate release,” asserted Thomas Woodley, President of CJPME.  CJPME believes that, given that Canadian consular officials knew the real reasons for the detention of Greyson and Loubani since early on, the response at the political level should have been triggered much earlier.

With events since Saturday, CJPME believes that political intervention from the Canadian government is still required.  While freed from prison on Oct. 5, Greyson and Loubani are still being prevented from leaving Egypt.  CJPME urges the Prime Minister to act immediately to insist that Loubani and Greyson be allowed to leave the country without further delay.  According to media reports, Egyptian authorities say that the two may not be allowed to leave Egypt until the cases of the hundreds of other people detained in the same sweep are resolved.

Loubani and Greyson were en route to Gaza when upheavals in Egypt led to the closing of the Egypt-Gaza border, waylaying them in Cairo. While walking near their hotel on August 16, they witnessed hundreds of protesters injured during clashes between protesters and Egyptian security forces. Dr. Loubani, an emergency room physician, began treating the injured, and Greyson filmed him at work. According to a chilling account made public September 28, they witnessed carnage and saw over 50 Egyptians die that day. While returning to their hotel later August 16, they were arrested, beaten and jailed. Their detention order was repeatedly extended, despite the lack of evidence to justify it, until their abrupt release October 5.