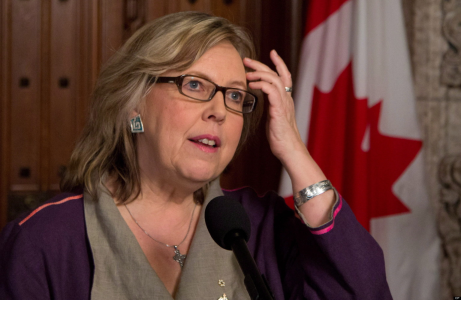 Montreal, Dec. 2, 2013  — Canadians for Justice and Peace in the Middle East (CJPME) has withdrawn its  invitation to Green Party leader Elizabeth May to speak at its  Ottawa fundraiser Dec. 5th.  The decision was taken  following the release of the full transcript of an interview May gave to the Jewish Tribune.  “When we invited May, we had assumed that she would present a position that was closely aligned to the official Green Party position on the Middle East and Israel-Palestine,” stated CJPME President Thomas Woodley.  The Green Party’s ‘Vision Green’ policy document on Israel-Palestine is clear in its intent to uphold international law, to promote the creation of a Palestinian state, and to seek to end the blockade of Gaza.  “Unfortunately, May’s comments to the Jewish Tribune indicated that she intended to stray surprisingly far from the ‘Vision Green’ platform in her speech at our event,” continued Woodley.  “As such, we felt it would be inappropriate to host her as a keynote speaker.”

May had accepted CJPME’s invitation to speak at its fundraiser earlier in the fall, and had not indicated any discomfort with CJPME’s policy focus on upholding international law in the Israel-Palestine conflict.  Nevertheless, the Jewish Tribune article published November 19 – following an interview with May – quoted her as stating that CJPME maintained an “anti-Israel stance” that she wanted to distance herself from.  CJPME immediately contacted May and asked her to correct the article if it misrepresented her stances.  In response, May issued a statement on the Green Party website November 27th denying, among other things, that she had called CJPME “anti-Israel.”  Nevertheless, two days later the Jewish Tribune published the full transcript and audio recording of the interview, which reveals  that May’s “correction” was actually false.

The full transcript of the interview also revealed several other things, among them 1) that May was taking all her cues about CJPME from CJPME’s political opponents; 2) that May berated and belittled CJPME’s work for justice, peace, international law and human rights, and 3) that May had planned to use her speech to publicly oppose “a lot of the policies” of CJPME.  “Naturally,” stated Woodley, “seeing the full transcript of the interview gave us pause for many reasons.”