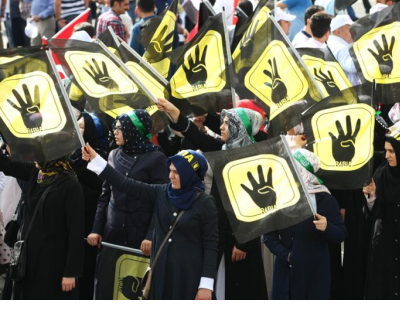 Montreal, December 3, 2013  — CJPME urges Canada’s government and MPs to press Egypt’s interim government to rescind an anti-protest law severely curtailing freedom of assembly. The law, ratified November 24 by interim president Adly Mansour, obliges groups wanting to demonstrate to obtain seven separate permissions to protest publicly. It gives police the final say on whether a protest can take place and allows police to forcibly disperse even a legal protest if even a single protester throws a stone. It also bans overnight sit-ins. The law also stipulates harsh prison sentences for vaguely defined offences, such as attempting to “influence the course of justice” or “impeding the interests of citizens.”

The new law has sparked anger among liberals, youth groups and even allies of the interim government. Nineteen Egyptian rights groups signed a joint statement opposing the law while it was being debated. Police arrested dozens protesting the new law Tuesday, November 26th. Cairo students also ignored the law days later, gathering at CairoUniversity Thursday November 28 to protest a harsh sentence against a group of young female protesters. However, police again took full advantage of their new powers, killing one student, injuring eight others and arresting 24 during the protest.

“Canadian MPs must address Egypt’s interim government’s crisis of legitimacy, and the fact that it is giving carte-blanche to the police to kill, maim and arrest peaceful protesters,” says CJPME President Thomas Woodley. CJPME notes that the law also gives the Interior Ministry the right to ban any unsanctioned public gathering of 10 or more people in a public place, including those related to electoral campaigning. No exceptions are contemplated for small non-disruptive demonstrations, or urgent and spontaneous ones, according to Human Rights Watch. “With both social protest and electoral campaigning so restricted, Egyptians will have almost zero options to legally demand reforms,” adds Woodley.

CJPME believes that it is crucial that the Harper government and MPs of all political stripes take concrete steps to encourage democracy in Egypt. Canada has yet to condemn the military overthrow of the elected government last July, nor has it signalled any expectation that Egypt’s military submit to control by an elected civilian government, rather than the reverse. Canada should also press energetically for the release of all political prisoners—now in the thousands—and an end to the forced disappearance of five of deposed President Morsi’s aides since July. CJPME also urges Canada to promptly condemn instances of the use of excessive force by Egypt’s security forces.