CJPME: Harper’s trip should not be a love-in with Israeli right 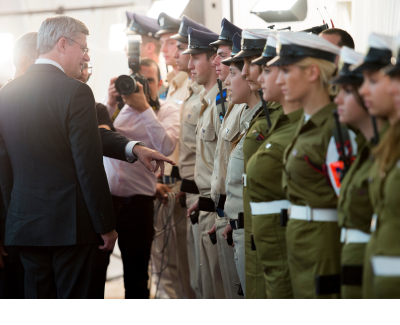 Montreal, January 16, 2014  — CJPME is troubled that Prime Minister Stephen Harper appears poised to miss an excellent opportunity to contribute to a just peace between Palestinians and Jewish Israelis during his upcoming trip to the Middle East. “Harper should press Israel to halt settlement expansion, once and for all; if it continues, a viable Palestinian state cannot be created, nor peace ever achieved,” states CJPME President Thomas Woodley. CJPME believes that the PM has a responsibility to Canadians, Israelis and Palestinians to uphold international law and fundamental human rights at all times, especially during such a state visit. CJPME reminds the PM that Israel’s establishment of “settlements” in the occupied Palestinian territories is a grave violation of international law and has been repeatedly condemned by most western nations.

CJPME notes that Harper—given his warm relationship with Israel’s current leaders and their supporters in Canada—has considerable leeway to speak frankly with Israeli leaders about the key impediments to peace. CJPME points out that 40 percent of the West Bank is now under the direct control of settlers or settlement “Regional Councils”, and off-limits to Palestinians. Israel has built hundreds of kilometres of roads crisscrossing the entire West Bank to connect these illegal settlements to each other and to Israel. In addition, the Israeli Wall juts deep into Palestinian territory, separating Palestinian communities from each other and impeding Palestinians’ daily activities and economic development. Had the Wall been intended simply to protect Israelis, it would have been built on the 1967 border. However, it was clearly designed to facilitate Israel’s land grab: it de facto annexes 9.5 percent of the West Bank to Israel. Settler violence has almost quadrupled since 2006, according to UN figures.

As well, Israel’s blockade of Gaza constitutes collective punishment of the civilian population, also prohibited under international law. Israel’s navy restricts Gaza fisherman to within 3 nautical miles of the shore, shooting them if they venture into the deeper waters where fish are more plentiful and less contaminated by sewage. Israel has continued the extreme restrictions on the entry of building materials needed by Gazans to repair clinics, schools, sewage facilities and homes damaged during Israel’s 2008-09 attack. In addition, Israel continues to detain large numbers of Palestinians without charge or trial, including children, and to impose excessive sentences on them for actions that would not be considered serious crimes – or offences at all, in some cases.

CJPME believes that Prime Minister Harper should spend time in the West Bank and also add to his itinerary a visit to a Palestinian refugee camp in Jordan. He should also speak with a broad spectrum of Israeli and Palestinian leaders and human rights groups. If settlement expansion and the blockade of Gaza continue, a viable Palestinian state cannot be created and peace will forever elude both Israelis and Palestinians. “Israel is on the verge of becoming an international pariah.  A good friend levels with his friend: when his friend’s conduct is illegal or unjust. Harper should do no less,” concludes Woodley.