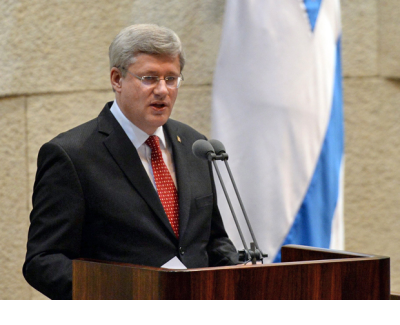 Montreal, January 21, 2014  — CJPME laments that in his address to the Knesset yesterday, Prime Minister Stephen Harper misrepresented the reasons for international criticism of Israel’s conduct. “Harper attributed criticism of Israel’s conduct to anti-Semitism.  In reality, the criticisms – including those from various European governments whose commitment to Israel’s survival is unstinting—are of Israel’s ongoing illegal land grab in the West Bank, its harsh military occupation, the longest in modern history, and its brutal blockade of Gaza,” says CJPME President Thomas Woodley.  CJPME notes that although Harper alleges that critics of Israel’s conduct are “singling Israel out” for criticism, in fact most of the organizations and governments criticising Israel’s conduct also frequently criticise other countries’ actions. “In effect, through such accusations, Harper has thrown Palestinians under the bus of Israeli territorial ambitions,” adds Woodley.

Harper also expressed outrage at the use of the term “apartheid” in reference to Israel. However, as noted by black South Africans who have visited Israel and the occupied Palestinian territories, the measures to segregate the Arab population there rival those taken against black South Africans during the apartheid years. Moreover, both Israeli human rights organisations and neutral international human rights bodies have noted that Israel has for years had a body of laws whose net effect has been to ensure the second-class status of the 20 percent of Israeli citizens who are Palestinian. Furthermore, under Netanyahu, a plethora of bills reinforcing and intensifying this discrimination have been introduced, and in many cases become law. “Harper may bridle at application of the term ‘apartheid’ to Israel, but it’s not inapt,” comments Woodley.

When Harper referred to the kind of Palestinian state he envisions, the term “territorially contiguous” was conspicuously absent. CJPME hopes that Canadian MPs and the media will query the Prime Minister whether he is, via this wording, signalling that his government has no objections to the annexation of East Jerusalem and the major expansion of settlements there and between it and the Jordan River. CJPME reminds MPs and the media that both of these moves have the particularly deleterious effect of bisecting the West Bank, thereby making the establishment of a separate viable Palestinian state even less likely.