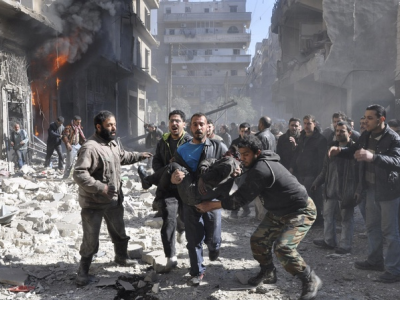 Montreal, January 23, 2014  — Canadians for Justice and Peace in the Middle East (CJPME) implores the Canadian government to address the Syrian civil war with urgency and greater substance.  Earlier this week, a report by renowned international war crimes judges, with the aid of forensic scientists, confirmed evidence of massive torture of prisoners committed by the Assad regime.  The thousands of photos document severe beatings, starvation and strangulation. This report makes meaningful involvement by Canada even more urgent.  Canada must press both sides of the Syrian conflict to respect human rights and international humanitarian law.

The authors of the torture report examined 5,500 photos of people who died in Syrian military police custody, provided by a soldier assigned by his superiors to take such photos but who later fled Syria. Twenty percent of the corpses showed evidence of inflicted trauma, and 42 percent of emaciation. A total of 55,000 such photos have been made available outside Syria, which the judges consider evidence of the deaths of 11,000 detainees.  Both sides in the Syria conflict have committed atrocities against civilians, but the report released earlier this week on torture by the Syrian government eclipse all previous allegations of war crimes in Syria.

CJPME believes that it is urgent that Canada establish special programmes to resettle in Canada its share of both Syrian refugees and Palestinian refugees normally resident in Syria, prioritising those most gravely affected.  “Stephen Harper and John Baird are happy to pop by Syrian refugee camps in Jordan and to criticise Bashar al-Assad, especially with media in tow. However, it’s clear that they are actually loath to resettle any significant number of the 2 million Syrian refugees,” notes CJPME President Thomas Woodley.  Given that the Assad regime still enjoys support from a significant portion of Syria’s population, and retains a strong hold on power, the Canadian government must become more committed to diplomatic strategies which bring and end to the conflict.

Canada has so far announced it would resettle only 1,300 Syrian refugees over 2013 and 2014. Canada is thereby obliging far poorer and less stable countries—Turkey, Jordan, Lebanon and Egypt—to shoulder the refugee burden. CJPME urges MPs of all stripes to push for a special programme to resettle in Canada at least 30,000 Syrian refugees over the next two years. It should also continue providing much greater humanitarian aid for Syrian refugees and displaced persons.