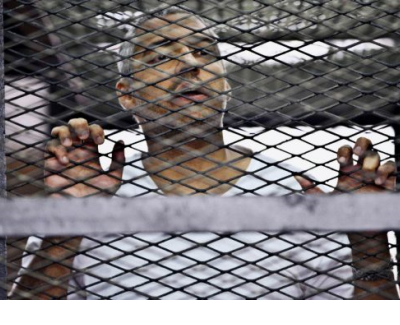 Montreal, February 3, 2014  — Canadians for Justice and Peace in the Middle East (CJPME) calls on Egypt to release Canadian journalist Mohamed Fahmy and the other Al Jazeera journalists currently languishing in jail there.  CJPME also calls on Canadian political leaders to get involved to prompt Egypt to drop all trumped up charges that have been filed against Fahmy and other Al Jazeera journalists. Egypt’s Prosecutor General announced on January 29 that it would try 20 Al Jazeera journalists on charges of incitement, distorting Egypt’s image broad and fabricating news to aid the Muslim Brotherhood. “Egyptian authorities must release Mohamed Fahmy, and Canadian political leaders must address this terrible travesty of justice,” says CJPME President Thomas Woodley.

On Friday, the United National High Commission for Human Rights voiced deep concern about the growing threats and attacks on media in Egypt, and pressed Egypt to “promptly release all journalists imprisoned for carrying out their legitimate activities.” The UNHCR spokesman also denounced the “systematic targeting” of Al Jazeera staff by the Egyptian authorities.

Fahmy, a producer who grew up in Canada but was born in Egypt, was arrested December 31 along with two Al Jazeera colleagues— Australian journalist Peter Greste and Baher Mohamed, who also remain jailed. Fahmy is respected by other journalists for his track record of balanced coverage, and had previously worked for CNN and the New York Times. Al Jazeera cameraman Mohamed Badr was acquitted on Friday of spurious charges of rioting, but has yet to be released. He has been detained since July.

CJPME points out that it is time for the Canadian government and other political leaders to intervene with Egyptian authorities to obtain the release of Fahmy and the other journalists. CJPME reminds Canadian MPs that they are the flag bearers for the right to freedom of expression in Canada and around the world. “Jailing journalists is the hallmark of despotic regimes, and Canada’s MPs should make it clear that there will be consequences if Egypt persists in the crackdown on the media and on peaceful protesters,” concludes Woodley.