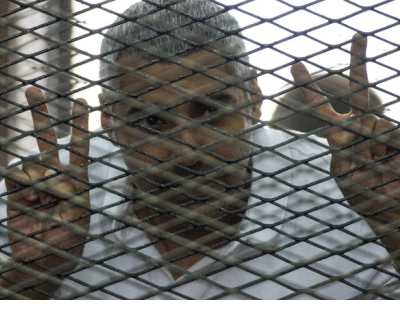 Montreal, February 20, 2014  — As news that Canadian Mohamed Fahmy and two other Al Jazeera journalists will remain in jail until March 5, Canadians for Justice and Peace in the Middle East (CJPME) has learned that Canadian officials have underserved both Fahmy and his family.  The three journalists are accused of supporting the Muslim Brotherhood – now virtually outlawed in Egypt – and of broadcasting “misleading” news about events in Egypt.  The three journalists pleaded not guilty, but the Egyptian court has refused them bail.

CJPME calls on the Egyptian government to immediately release Fahmy and all other journalists – about 20 total – detained in Egypt under spurious charges.  CJPME calls on the Canadian government to work at the highest levels to secure the release of Fahmy and his colleagues.  “Democracy in Egypt becomes ever more distant when journalists are accused by the government of ‘aiding terrorists’ as they simply try to do their jobs covering a story,” stated CJPME President Thomas Woodley.  “Journalism is not terrorism, and our Canadian political leaders have special reason to speak out for these men, and for press freedom in Egypt.”  For its part, Aljazeera has called the charges against the journalists “absurd,” and all indications are that the men were simply covering developments in their capacity as journalists at the time they were arrested.

In addition to being held in jail since December 29th, CJPME has learned that Fahmy has a dislocated shoulder which has remained untreated since his incarceration.  A journalist present at the court appearance today also noticed that Fahmy’s family was denied access to the courtroom, while those of Australian colleague Peter Greste were permitted.  When questioned on this point, the Canadian delegation was dismissive, suggesting they were powerless: “This is Egypt,” stated one.

Like many Canadians, CJPME believes that the Canadian government should intervene urgently on behalf of Fahmy’s health and well-being while incarcerated in Egypt, ensuring he gets properly medical care, and that his family is permitted maximal access.  Many Canadians have rallied on behalf of Fahmy and his colleagues: a press conference was held last week in Toronto which involved Tony Burman (former managing director of Al Jazeera English), John Stackhouse (editor-in-chief of The Globe and Mail), and John Greyson (former Canadian detainee in Egypt, and YorkU. professor.)  A petition for Fahmy was also launched several weeks ago, and has already garnered over 400 signatures (http://nb.cjpme.org/moh_fahmy).