Canadians to protest detention of journalists in Egypt 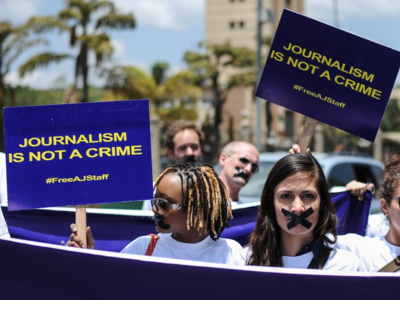 Montreal, February 25, 2014  — Canadians will demonstrate with others around the world this Thursday, February 27th, in a global Day of Action against the arrest of journalists in Egypt.  Protests are planned for Toronto, Nathan Phillips Square, and Montreal, the Egyptian Consultate, and perhaps other Canadian sites at noon on Thursday.  They join dozens of other events around the world in a global Day of Action under the theme: “Journalism is not a Crime.”  “Journalists are being arrested and detained in Egypt simply for doing their jobs,” asserted Thomas Woodley for Canadians for Justice and Peace in the Middle East (CJPME).  “It is time for the world – Canada included – to demand their release.”

The event in Toronto is being organized by Al Jazeera English (AJE), and Canadian Journalists for Free Expression (CJFE), while the event in Montreal is being organized by CJPME and the Egyptian Canadian Coalition for Democracy (ECCD.)  Many of the events around the world on the 27th will be coordinated around a common theme.  In addition to a common event slogan of “Journalism is not a crime,” protesters – many of them journalists – will demonstrate with tape over their mouths as a symbol of the muzzling of journalists in Egypt.

Canadians have special reason to mobilize for the detained journalists as one of individuals detained since Dec. 29th is a Canadian: Mohamed Fahmy with AJE.  Charged with “spreading false news,” Fahmy and three other AJE journalists are four of the most high-profile arrests by Egypt.  Nevertheless, about 20 journalists are currently being detained in Egypt, several of whom have experienced solitary confinement, torture and denial of medical treatment.  “The arrest of journalists in Egypt is a reflection of the dismal condition of democracy in Egypt,” said Ahmed Mohamed of the ECCD.   “Our Canadian political leaders must speak out for these men, for press freedom, and for greater civil liberties in Egypt.”

Egypt has accused the journalists of a number of crimes: “disturbing the public peace, instilling terror, harming the general interests of the country, possessing broadcast equipment without permit, possessing and disseminating images contrary to the truth.” Nevertheless, by all accounts, Fahmy and his Aljazeera colleagues were simply doing their jobs as journalists to cover breaking events in the country.  For its part, Aljazeera has called the charges against the journalists “absurd.”

The Facebook page with details on the Day of Action is at http://facebook.com/freealjazeerastaff.  A petition for Canadian Mohamed Fahmy is currently active at http://nb.cjpme.org/moh_fahmy.  An Amnesty International Australia petition for detained journalist Peter Greste is at http://www.amnesty.org.au/action/action/33972/