CJPME supports U. of Windsor student referendum on BDS 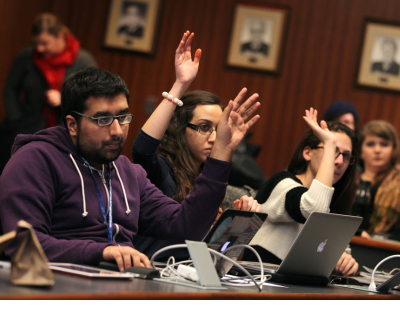 Montreal, March 17, 2014  — Canadians for Justice and Peace in the Middle East (CJPME) welcomes the University of Windsor students’ recent decision to support divestment from companies implicated in Israel’s occupation of the Palestinian territories. CJPME notes that this is the first time that such a decision has been taken by a campus-wide referendum, rather than by the student association’s council.  CJPME laments U of W President Alan Wildeman’s current attempt to discredit the referendum, and believes his actions are in response to coercive pressure from donors who are hostile to Palestinians and Muslims.  “It is lamentable that in this day and age, a university president is making vague threats against a student organization because the results of a student referendum are not to his own liking, or to that of certain donors,” says CJPME President Thomas Woodley.

The referendum, held February 27 to March 1, drew well above the minimum quorum required for a student referendum to be considered valid. The results were 57% for divestment, 42 % not in favour. On March 4, a donor to the university—Richard Spencer, head of an engineering firm—wrote to Wildeman, complaining about the referendum and claiming that the majority voting in it must have been “of the Muslim faith, which promotes violence and hatred toward the Jews in the Middle East.” Spencer also demanded that Wildeman take immediate action to “obliterate” the “environment that had been created,” and threatened to not only cease supporting the university but also stop hiring co-op students from the university’s Civil Engineering Department.

On March 4, Wildeman wrote to the University of Windsor Student Alliance (UWSA), asking the UWSA to defer ratification of the report, which was expected to take place on March 13. Wildeman stated that if the UWSA did not defer the tabling of the CRO report, the University would have to “consider its options.” Meanwhile, a well-orchestrated disinformation campaign was mounted by anti-Palestinian groups, claiming that the referendum went much further than it actually did. The UWSA Council deferred the tabling of the report until the next meeting.

CJPME believes that Wildeman should neither cave in to manipulative donor demands, nor attempt to pressure the UWSA to ignore the results of a referendum on an important issue.  The referendum calls on the University to divest from companies benefiting from or involved in Israel’s violations of international law or its occupation of Palestinian territory. CJPME notes that the purpose of boycott, divestment and sanctions is to pressure the Israeli government to respect the 4th Geneva convention and heed the entreaties of the international community for it to end the occupation. “The University of Windsor students are to be commended, not threatened, for taking this brave step,” concludes Woodley.