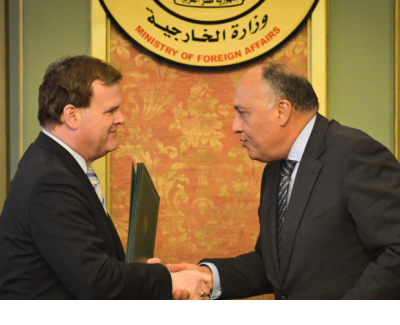 Montreal, April 16, 2014 — Canadians for Justice and Peace in the Middle East (CJPME) is deeply concerned by Foreign Affairs Minister John Baird’s plan to visit Egypt later this week. According to a ministerial announcement, the Minister will be meeting with members of Egypt’s interim government during an April 17-20 visit. “The Minister is ignoring the fact that Field Marshall Al-Sisi and his cronies assumed power via a coup and since then, according to neutral international human rights organizations, have ruthlessly violated human rights,” says C JPME President Thomas Woodley. CJPME warns that Baird’s visit will be interpreted as tacit approval of the regime’s conduct, of its overthrow of a democratically elected president, and of the recent mass death sentences handed down on March 24 to 529 alleged members of the Muslim Brotherhood.

CJPME is also concerned that Baird’s visit will be read within Egypt and the region as utter indifference to the fate of a Canadian journalist, Mohamed Fahmy, jailed since December 29. At a time when the Minister should be seriously considering cutting diplomatic ties with Egypt, it is instead ramping them up by pursuing increased trade with the regime. “The Harper government has made a fetish of being ‘open for business.’ But is it open for justice?”, asks Woodley. CJPME notes that despite the high-flown rhetoric about the visit’s goals, in the end, Mr. Baird will be shaking hands with a dictator intent on doing whatever it takes to maintain his grip on power.

CJPME reminds the government and opposition MPS that Egypt has made no progress on respecting basic freedoms or on its democratic transition, according to Human Rights Watch (HRW). Since assuming power on July 3, 2013, Egypt’s military-backed government has killed well over 1,000 protesters and locked up more than 16,000 people, in most cases for no more than peacefully exercising their rights to free expression, association, and peaceful assembly. HRW noted that the March 24 mass death sentences were issued in “a trial lacking even basic elements of due process, [and are] but one example of an escalating climate of extreme political repression.”

CJPME strongly urges Canadian MPs of all stripes to press Mr. Baird to cancel his visit, and, if they do not succeed in dissuading him, to at least make any trade increases conditional on both Mr. Fahmy’s release and significant progress in human rights and a transition to democracy.