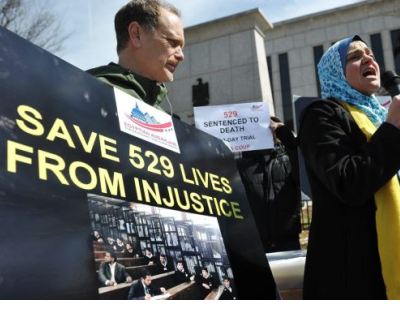 Montreal, April 29, 2014  — Canadians for Justice and Peace in the Middle East (CJPME) calls for a suspension of trade with Egypt, given yesterday’s sentencing of another 683 Egyptians to death following yet another patently unfair mass trial.  The April 29 mass sentencing raises the number of death sentences handed out in recent weeks to 720; the same judge also upheld the death sentences of 37 of 529 men whom he last month ordered hanged. The death sentences of the remaining 492 of the latter group were commuted to 25-year prison terms. Each group is alleged to have killed a policeman. Meanwhile, another judge banned the April 6 youth movement—a liberal youth group. Egyptian authorities continue to detain Canadian journalist Mohamed Fahmy and several other Al Jazeera news channel staffers, jailed since December.

“The Harper government is asleep at the wheel when it comes to its Egypt policy,” asserts CJPME President Thomas Woodley. Canada’s government has said nothing about the mass death sentences, nor about the lack of due process in both trials. CJPME notes that according to Amnesty International (AI), during neither of the two mass trials were defence lawyers allowed to present their case, nor were witnesses heard.  Many of the accused were not even brought into the courtroom. Some of the accused say they were not even present during the attacks on the police. Defendants’ families say that many defendants are not even mentioned in the prosecution’s documents.

The Egyptian government is currently re-defining terrorism in such a broad manner that virtually all public dissent could fall into that category. According to Human Rights Watch, draft amendments to 17 articles of the penal code define terrorism to include actions like labour strikes or peaceful protests.  Amendments to Article 86 of the penal code criminalise any “intimidation” that could “harm national unity,” prevent the application of the country’s constitution or laws, or “damage the economy.” CJPME urges Canadian MPs not to remain silent about Egypt’s violations of human rights, and to challenge the government’s policy on Egypt.

CJPME believes that Foreign Minister John Baird’s visit to Egypt April 17-20—on the heels of the death sentencing of the first 529 men—was a grave policy blunder. CJPME wonders whether Canada’s indifference to Egypt’s human rights violations and its intent to increase trade with Egypt is its way of rewarding the dictatorship for its extreme hostility to the Palestinians of Gaza. The current Egyptian authorities have closed the tunnels under the Egypt-Gaza border, thereby ensuring that Gaza’s civilian population feels the full weight of Israel’s sweeping blockade of Gaza.